As Canada approaches its exciting 150th anniversary celebration, I want to highlight ancestors who either settled there or first touched North American soil in Canada.

First, let me mention the illustrious Slatter brothers, my husband's London-born great uncles. They became well-known bandmasters in Canada, putting to good use the musical and military training they had received as children on the Goliath and Exmouth. 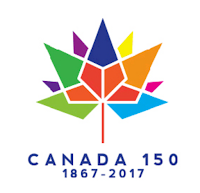 At least two of my Berk/Birk/Burk/Block/Berg ancestors left Lithuania, stopped in England with family to learn English and polish their woodworking skills, and then continued on to North America.
Oh Canada! Happy anniversary and many more.
Posted by Marian B. Wood No comments:

Genealogy--Free or Fee: Detailed NYC Marriage Records Worth Paying For

If you have ancestors who were married in New York City starting in 1908, I recommend that you click on the index records obtained by Reclaim the Records and crack open your piggy bank. Yes, there's a $15 fee--but you'll get first-hand info provided by your ancestors, invaluable for a Genealogy Do-Over or Go-Over. (NOTE: These index books are now on Ancestry and Family Search. You still have to mail away for the actual records, well worth the money.)

Thanks to Reclaim the Records, you'll know to request all three documents in the file: (1) marriage license, (2) application for license, and (3) affidavit. I showed step-by-step how to do the research in my original post about obtaining these documents for my parents' marriage. These days, there's a much longer wait--up to 8 weeks--because so many people are submitting requests. But eventually your SASE will land in your mailbox. Then the fun begins. 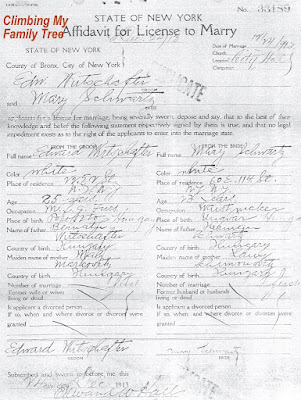 Yesterday, I received the documents for great-aunt Mary Schwartz and her husband, Edward Wirtschafter. Their daughter told me that the couple eloped on Christmas Eve of 1913, getting married at City Hall without first telling the family.

Here's their affidavit, which must be completed to receive a marriage license. Edward and Mary signed this themselves (my cousin and I have seen their signatures before).

Also, judging by Edward's handwriting, he may have filled out the form for both bride and groom. (I know from the handwriting on my parents' form that my father filled out both sides of the form, so Edward could very well have done the same.) 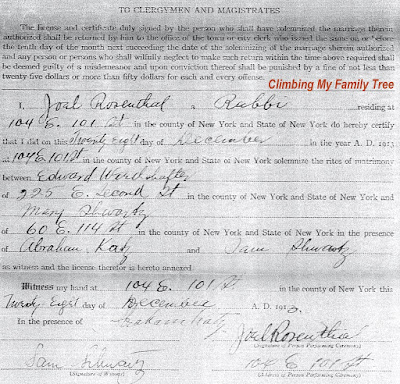 Note the faint stamp "Duplicate" at top and bottom of the affidavit? A clue as to why I got the unexpected bonus of one extra document: A paper signed by the rabbi who married Mary and Edward on December 28. One of the witnesses was the bride's oldest brother in America, Sam Schwartz.

So the couple married in a civil ceremony and then married again four days later in a religious ceremony, with at least one family member present. This adds a new dimension to the "elopement" story, a new dimension that wasn't in the original family story.

In all, my $15 investment either revealed or confirmed places of birth, parents' names for bride and groom, home addresses, occupations, etc. Plus I now know that Mary's brother stood up for her at the religious ceremony. I got my money's worth on this set of records!

For more posts in my series Genealogy, Free or Fee, see this summary.
Posted by Marian B. Wood 1 comment:

Remembering the Dads on Father's Day

For Father's Day, I want to remember, with love, some of the Dads on both sides of the family. 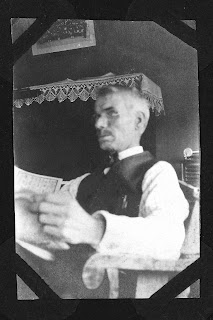 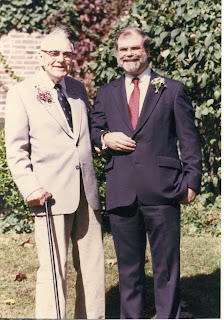 Isaac's father was Elias Solomon Birk, a farmer in Kovno, Lithuania, who married Necke [maiden name still not certain]. I never knew Elias was a farmer until my newly-discovered cousin told me she learned that from her grandfather, my great-uncle. 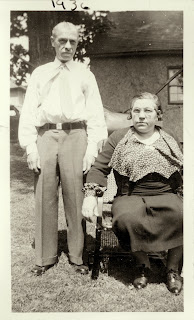 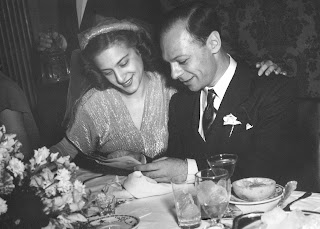 Happy Father's Day to all the Dads of cousins in all branches of our family trees!
Posted by Marian B. Wood 1 comment:

Now that my mother's address book has helped me trace several "elusive" siblings of my paternal grandpa Isaac Burk, I've sent for documents to fill out their life stories. I began with my great uncle Mayer Berg (1883-1981), who was a year younger than my grandpa.

One lesson learned is: NARA doesn't have everybody's naturalization documents. A day after I submitted an online request and payment for Mayer Berg's naturalization papers, the archivists emailed me. They did not have Mayer's paperwork, but the Bronx authorities probably did. Thanks for the tip!

Another lesson learned: Pick up the phone before mailing a check. I called the Bronx County Clerk's office, and the officials kindly confirmed that they held Mayer's documents. I got a "package deal" because the petition and declaration were in a single file, so I didn't have to send for them separately (which would have cost more).

Snail mail was faster than usual: I received Mayer's naturalization documents in barely a week. It's dated June 6, 1918.

Just think, this great uncle was standing in a Bronx courthouse 99 years ago, filling out his final paperwork, declaration of intention for US citizenship. Mayer took his Oath of Allegiance on November 23, 1920. I'm going to give these documents to Mayer's granddaughter when we meet this week!
Posted by Marian B. Wood 1 comment: 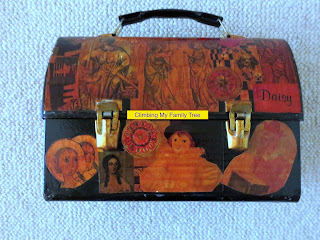 My mother (Daisy Schwartz Burk, 1919-1981) loved to crochet and embroider, and even did a bit of needlepoint and petit-point in her twenties.

But she never did any decoupage. Nope, even though I remember her showing off this unusual, personalized metal lunch box made into a special purse.

My Sis read my original post (in italics, below) and corrected my faulty memory. It seems back in the early 1970s or so, one of Mom's bosses had this one-of-a-kind decoupage purse made especially for her as a Christmas gift. While Mom admired it, the darn thing was heavy and a bit clunky. Maybe Mom never even used it, Sis says. My guess is she used it a couple of times when going to work, just so the boss could see that she appreciated his thoughtfulness.

My lesson learned: Always ask family before recording the history of a so-called heirloom.

Which brings up a question for Sis: If Mom never made this decoupage piece, why the heck do we still have it in our possession after all these decades?

In her late 40s, she (Mom) became interested in the craze for decoupage and decided to create a purse from a black metal lunch box (the kind with a domed lid for a thermos).

Here's the result, featuring magazine pictures she liked, cut out, and added in painstaking layers. Mom would be happy to know how much her descendants treasure these hand-crafted items, now family heirlooms!
Posted by Marian B. Wood 4 comments:

Sentimental Sunday: Pages from the Story of Wood and Slatter 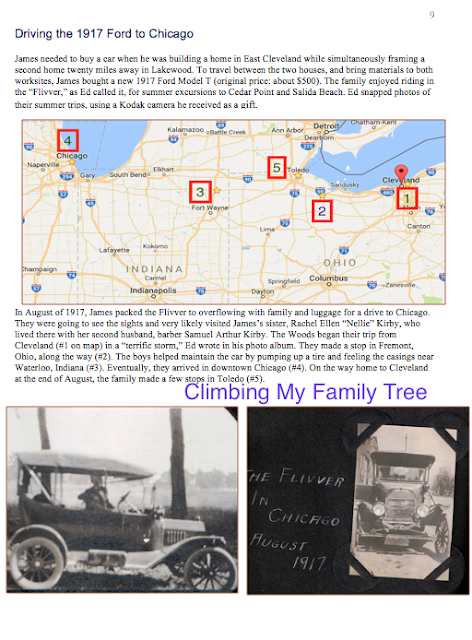 The Story of James Edgar Wood and Mary Slatter Wood is written, photos and maps are in place, and I'm going to bring the .pdf to be color-laser-printed in the local copy shop. In all, I needed 21 pages to tell the story of hubby's paternal grandparents James, Mary, their family backgrounds, along with a brief overview of what happened to their four sons (including my late father-in-law, who took these photos of the 1917 Ford). 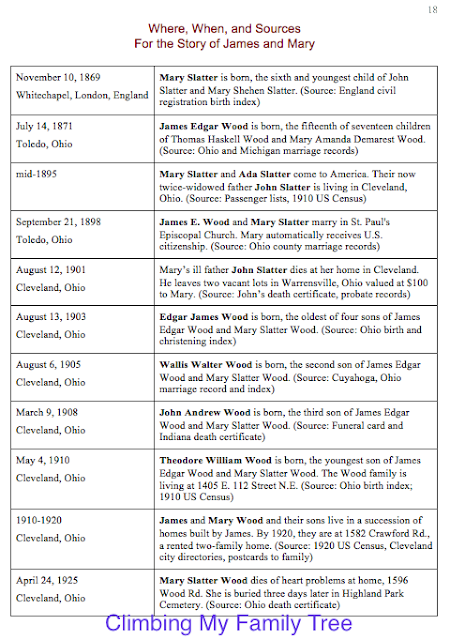 Just in time for the June Genealogy Blog Party, here are two pages from this newest family memory booklet, and a few lessons learned along the way toward preserving this family history:
Don't forget to include a family tree! I included one in the back of the booklet, showing this branch and how it extends back three generations on James's side and on Mary's side.

This is only one way I'm sharing my family's history with the next generation. More ideas are in my genealogy book, Planning a Future for Your Family's Past.
Posted by Marian B. Wood 11 comments:

Friday's Faces from the Past: Cousins Try to Name Names 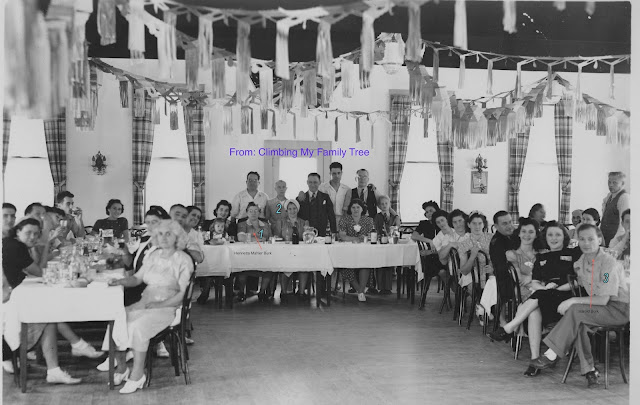 Now that I'm in touch with more descendants of my paternal Burk family, I'm asking them to help identify who's who in this party photo from the late 1930s or early 1940s. I can't tell when, where, or why this party took place.

At far right in the foreground is my father, Harold Burk (#3). Seated near the center is his mother, Henrietta Mahler Burk (#1) and his father, Isaac Burk (#2).

My grandfather Isaac's family had distinctly different ways of spelling their shared surname when they came to America from Lithuania, reminding me to be flexible when I search and consider Soundex variations: