This week I've talked with two of my cousins. One is the genealogist of my maternal grandmother's family, a smart researcher who gets things done through a combination of online resources and helpers at the local FHC. She's recuperating from a broken hip and has had to put genealogy on hold for now, but we've been enjoying our discussions about the process of genealogy, not just the vital information she uncovers. We learn from each other and laugh a lot at the twists and turns in the genealogical road.

The other cousin has been a wonderful source of details that helped me investigate new branches of the family tree. She's not involved in genealogy but she welcomes the opportunity to talk about our common ancestors. Unfortunately, she has no photos to share, but she does remember family stories and has a very keen mind. If not for her, I would know nothing about my grandfather's siblings. And I'm delighted to get to know her and hear about her daily life.

So here's to cousins! Long may we be connected and talk about all kinds of things, not just family history.
Posted by Marian B. Wood 3 comments:

The Bronx, Then and Now 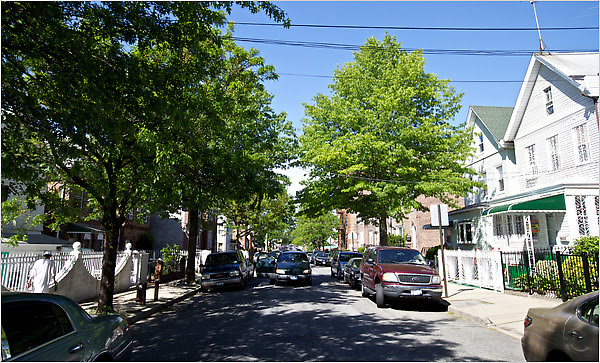 Today's New York Times has an article (and online slide show) about the Wakefield section of the Bronx, where my family grew up many decades ago.

The caption for this contemporary photo says it's on "Carpenter Street" but I bet it's really on Carpenter Avenue, which runs from 233 Street to 222 Street.

PS 103, mentioned in the article, is on Carpenter Avenue, a residential street (as you can see) with homes and apartment houses. From the school it was possible to watch the construction of Misericordia Hospital, which was built in the late 1950s. In those days, a school field trip to a local dairy was a treat.

At the time, the neighborhood was filled with small businesses such as bakeries, butcher shops, delis, pizza places, dress shops, drug stores, and ice cream parlors, all of which beckoned to commuters walking home from the elevated subway after a long day working in Manhattan, an hour's train ride away. Commuters in the know tried to catch the "through express," subway trains that skipped certain stations during the morning and evening rush hours to cut 10-15 minutes off the ride to and from "the city." Remember?!
Posted by Marian B. Wood No comments:

Who Holds the Genealogical Treasures?

I know several family researchers who are grappling with the question of who is the "keeper" of original treasures such as birth certs, death certs, photos, etc. More important, who keeps the originals once we, the genealogists of our generation, are no longer willing or able to continue the research?

Some of the families have given specific items to different family members, knowing that one son might be particularly attached to a certain photo or another daughter might be more interested in her mother's side of the family tree. Some circulate copies and keep all originals in one place (the genealogist's choice).

At times, the people who want the treasures may not be the best stewards of these often fragile items, even if it's "all in the family." I've also heard about family situations where no one is interested enough to want to safeguard the treasures--they might hold onto the items but not put them in particularly dry or safe places, know what I mean?

My family's next generation genealogist has already raised her hand. I plan to get things in good shape for her. Ancestor photos are now in plastic sleeves but not yet fully labeled. And those little scraps of papers with scribbles that litter my files will have to be transcribed and put into the database so no one has to reinvent the wheel and start the hunt all over again. Looks like all the treasures will be hers to hold for future generations. What about your treasures?
Posted by Marian B. Wood 1 comment: