Saluting Relatives Who Served Our Country

For Veterans' Day 2015, I wrote (again) about my father and uncle, Harold and Sidney Burk, who served in the US Army during WWII. Also my aunt, Dorothy Schwartz, who was a WAC in WWII, and my uncle, Fred Shaw, who was in the US Army in WWII.

Now I want to honor other relatives who served our country during the world wars.

Let me start with my great uncle Louis Volk, whose service seems particularly dangerous because he was in munitions factories during 1918. Louis married my paternal great-aunt Ida Mahler in 1920 and was a close member of the family, helping my father get a leg up on his career before WWI.

My two Farkas great-uncles, Julius and Morris Farkas, were in WWI, even though Julius registered as a conscientious objector. Julius served as a cook in the war, while Morris processed new recruits and discharged vets for the US Army.

On my maternal grandfather's side, his nephew, Morton M. Schwartz, served in WWII.

Thank you to these relatives who served during wartime.
Posted by Marian B. Wood 5 comments:

The May theme for Elizabeth O'Neal's Genealogy Blog Party is: Duh! What was your genealogy "duh" moment and how did you solve it?

I knew my father's younger brother, Sidney Burk, was born in Canada in 1914, and brought across the border by his mom a year later when she moved back to NYC as her husband looked for work there.

But since Uncle Sidney died a bachelor, and I knew him well, I never bothered to look for his birth records or even his naturalization, assuming there was one.

This was an anomaly: I'm forever chasing after genealogy documents of ancestors' siblings, aunts, uncles, and cousins--because there are often nuggets hidden in their documents that can help me learn more about the family (like maiden names or hometowns). For some reason, I just didn't see my uncle's birth as a research priority, especially since I knew little about searching in Canadian records.

Then I heard an expert in French-Canadian genealogy mention the Drouin collection. I went home, logged on, and entered "S Berk" with "Quebec, Canada" as the place of birth. (Berk was the family's name before Burk.)

The top result of my search was "Samuel B. Berk," a name I never heard of. But with a click, I had on the screen a handwritten record of Uncle Sidney's birth, as the son of Henrietta Mahler Berk and Isaac Berk, my grandparents. Duh. So simple, and quite intriguing to find out he'd been given a different name than the one I knew him by.

Double duh: A few lines down in the results was a "Lily Berr" and below that, "Rose Bert." Click: they were both related to Abraham Berk (not transcribed correctly but worth a click to check). I know that name! It's my great-uncle, the brother of my grandpa Isaac. Never before had I known where Abraham lived or the names of his children, and suddenly that entire line opened up to me. Even better, there were living cousins who I soon traced and now am in contact with.

So my duh led to discovering an entire limb of my father's family tree. From duh to WOW!
Posted by Marian B. Wood 15 comments:

Gen Go-Over: Eyes on the Prize 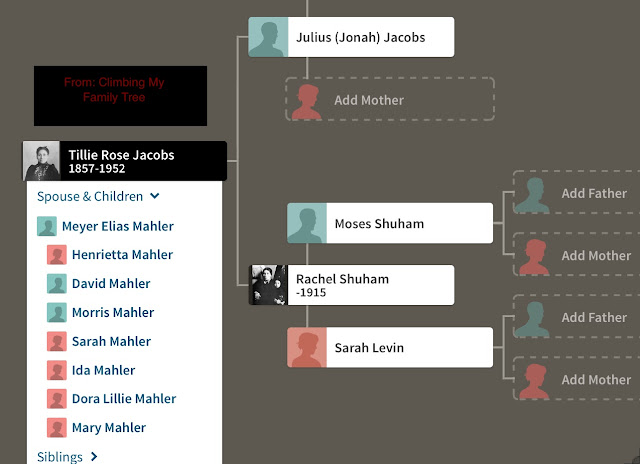 Yesterday, my cousin (found through genealogy, of course) said something profound that applies to this year's Genealogy Go-Over. My cousin is a brilliant businesswoman and has keen insight into people. When she talks, I listen.

She was talking about a friend who played golf very, very well. This man was a perfectionist. When he was in a tournament, he would agonize over every swing and analyze every shot afterward, going over and over what he should have done and how he could improve.

While this gentleman was trying to perfect each shot, his competitors were playing golf. And winning. His obsession with perfecting technique derailed his ability to win.

My cousin's point: Keep your eyes on the prize. She was reminding me not to miss seeing the forest by being distracted by all the trees. Every tree is important (just like every ancestor is important) but the big picture is equally important. Stepping back to see the big picture is every bit as vital as checking, sourcing, and documenting every last detail.

One of my goals is to find out about ancestors who are known only by name, like Rachel Shuham and Jonah Jacobs, who were my paternal 2d great-grandparents from Lithuania. We know Jonah died some time before Rachel and their two children and grandchildren came to New York City in the 1880s. Lots more to learn there!

So for me, the Genealogy Go-Over is really about carefully reviewing what I know and using that info, plus new cousin connections, new techniques, and new data, to move ever closer to the prize of understanding who my ancestors were, where (exactly) they were from, and whether we have other cousins out there, still to be found!

I'm awaiting DNA results from Ancestry that I hope will offer a window into a different family story, one about my maternal grandfather's background. The story is about the various tribes that conquered Hungary hundreds of years before grandpa Tivador Schwartz was born in Ungvar. The tribes raped and pillaged their way across the landscape, and supposedly some of that tribal blood found its way into my grandpa's bloodline generations back. Will my DNA results reveal any trace of the conquering tribes? Waiting to see.
Posted by Marian B. Wood 3 comments:

Free the Faces on Slides to Unlock Family Stories

Do you, like me, have binders or boxes filled with 35mm slides?

Think of all those faces and stories trapped on those teeny, tiny slides. Some of my big breakthroughs in genealogy have come when a cousin recognized a face in a photo and dredged up an old family story. If those little faces don't escape from the slides, family stories may not come to light.

My late father-in-law, Edgar James Wood, had a dozen slide trays filled with travel images. Others in the family stored slides in binders (see above). These slides were not only dated, they had a table of contents with each binder and notes about where/why the photos were taken. A great head start for family history research!

However, it's not a good idea to leave slides in these plastic sleeves for decades, unless they're archival quality. Even then, remember that slide technology is old technology.

How many of our descendants will have or want a slide projector? I have one spare projector bulb. In 15 or 50 years, will another bulb be available if a grandchild or great-great-grandkid wants to view slides? Probably not. Will they even know what a projector was??

So it's time to downsize, move to newer technology, and organize.
Free the faces and unlock those family stories!

This banner, on velvet, dates from hubby's father's career playing jazz piano during and after college in the jazz era of the mid-1920s.

Who were the Society Syncopators? Well, originally, Fate Marable's Society Syncopators popularized jazz on Mississippi riverboats during the 1920s--most likely the inspiration for Edgar James Wood using a similar name for his jazz band or trio.

Sweet Sue and Her Society Syncopators were the band in 1959's Some Like It Hot, which is set in 1929.
Posted by Marian B. Wood No comments:

Military Monday: It's a Long Way to Tipperary WWI Handkerchief 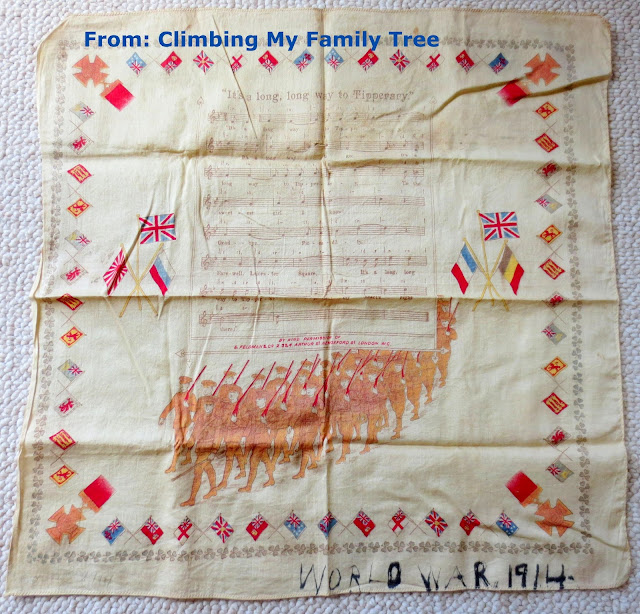 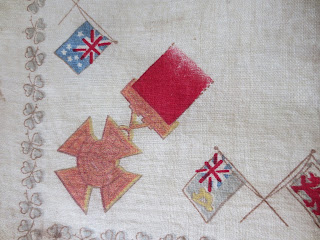 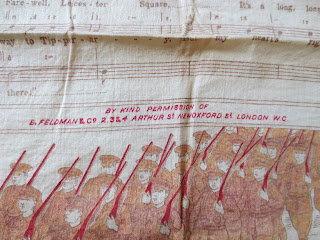 It's a Long Way to Tipperary was popular during WWI, and troops were heard singing it all over Europe.

I did a little Web research and discovered this exact handkerchief in the collection of London's Imperial War Museum! And in other museums, including Museum Victoria in Australia and the Canadian War Museum.

The medal is the Victoria Cross.
Posted by Marian B. Wood 1 comment:

At left is my Mom, Daisy, about age 20. She graduated high school at 16 but instead of going directly to college, she worked to help her siblings through college.

At right is hubby's Mom, Marian, about age 48. She was a talented ceramicist and enthusiastically supported all her children's artistic endeavors. 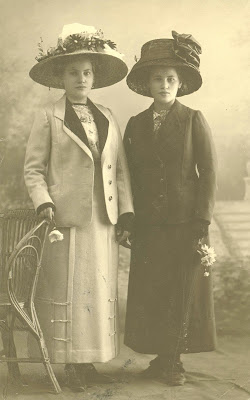 Both of the ladies in this photograph, dear sisters of my grandpa Theodore Schwartz, lost their lives in the Holocaust. On Yom HaShoah, I want to honor their memory and the lives of so many others who were killed by saying: