110 Years Ago Today, Great-Grandpa Farkas Became a US Citizen 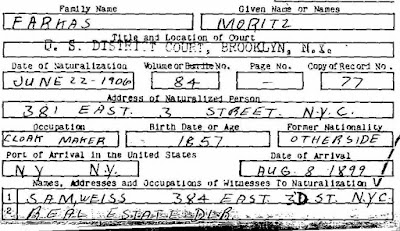 Moritz Farkas (1857-1936), my maternal great-grandpa, was born in Botpalad, Hungary. He arrived alone at Ellis Island on August 8, 1899, seeking to escape debts after hail destroyed his crops, and make a fresh start in NYC for his growing family. Great-grandma followed him a year later, temporarily leaving her children in Hungary with their Kunstler grandma.

Although it was great-grandpa's fond wish to have a more rural life (by farming in the Midwest rather than living in the concrete canyons of New York City), great-grandma Lena Kunstler Farkas (1865-1938) knew she had daughters to marry off. She insisted they live near a ready pool of suitable suitors in the big city. So they stayed put in NYC, moving from Manhattan to the Bronx, which was then a suburban-type area.

Great-grandpa took the oath of US citizenship on June 21, 1906 and his naturalization was filed on June 22, 1906. His witness was Sam Weiss, a real estate dealer. The Weiss name is intertwined with the Farkas and Schwartz families of my mother's family tree, as well as with the names of other cousins like Weiman and Roth, but whether Sam was a relative or an in-law or a colleague, I don't yet know. 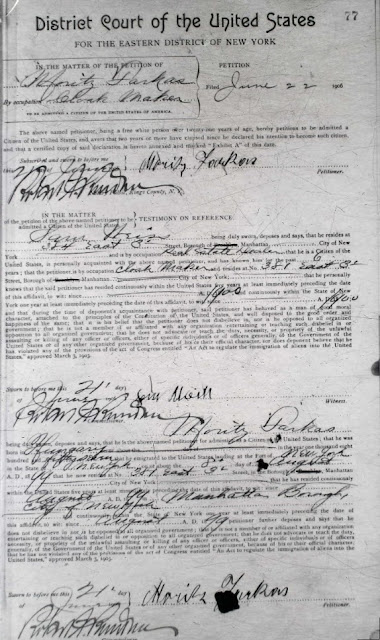 Now, a look back at forefathers on both family trees. This was my wonderful daughter-in-law's idea. On Mother's Day she wrote her sibs about all the Moms in their family tree.

Edgar J. Wood's father was James Edgar Wood (1871-1939), one of 17 children born to a carpenter (the Wood name reflected hundreds of years of the family's occupation). Edgar was an exception: He became an insurance adjuster and his night/weekend vocation was musician.

Harold D. Burk's father was Isaac Burk (1882-1943), a cabinetmaker who left Lithuania around the turn of the 20th century, stopped in Manchester, England with an aunt, and continued on to North America, where he eventually settled in New York City. Harold's paternal grandfather was Solomon Elias Birck, and that's all I know of my father's paternal line.

Thinking of them all with affection and respect on Father's Day.
Posted by Marian B. Wood No comments:

Sibling Saturday: The Twins and Their Matching Pearls 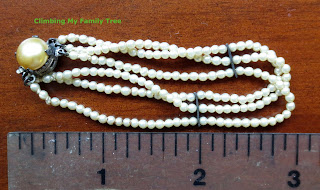 For decades, I've had a three-strand pearl bracelet with silver-backed clasp, too tiny for ordinary human wrists.

I knew it was inherited, but I had no other info. Which side of the family was it from? Who had worn it? No idea. 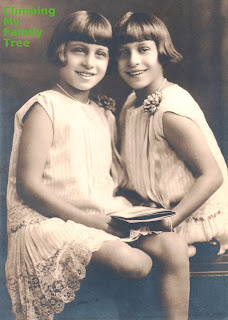 Until now. Yesterday, my sis "rediscovered" a photo of my mother and her twin sister, dressed in matching 1920s dresses for some occasion, with matching Buster Brown haircuts.

Nor do we know what the occasion was. They were born in winter, so these aren't birthday dresses.

Notice the sisters are wearing matching pearl necklaces and on one of the wrists, a slender three-strand pearl bracelet is visible. (See close-up of the wrist, below.)

Mystery solved: This bracelet must have been inherited from my mother or aunt, whose normal-sized adult wrists were too large for the tiny pearls. Of course the bracelet will be passed down in the family with the photo and the story! 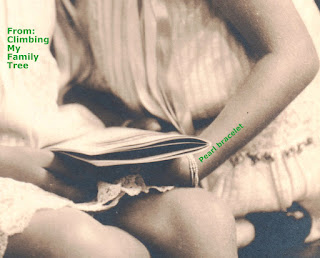 Posted by Marian B. Wood 7 comments:

Fortunately for my research into hubby's McKibbin/McKibben family, there are lots of old Indiana newspapers available to search.

At left, one of the more bizarre articles I found in Elkhart newspapers from 1903. Headline: Skeleton Puzzles Farmers Living East of Goshen.

The newspaper speculated on who the dead person might be. Possibly Bill Swazy who went missing after a night of heavy drinking?

I previously found an article about another of "Squire" McKibbin's children, Phoebe McKibbin Herrold. The headline: Dies in Chair as She Crochets. Can't make this stuff up!

The squire's wife, Harriet Larimer McKibbin, died of "lung fever" according to the sentence in the news I found. The squire himself "dropped dead" at his home, as the news item above shows.