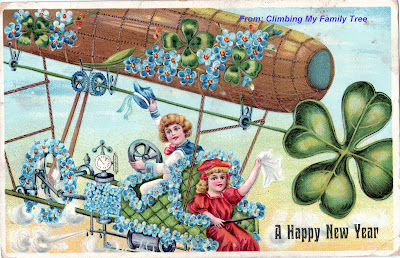 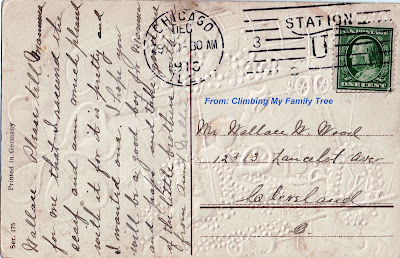 By the time this postcard was written at the end of 1910, Wally had two younger brothers in addition to his older brother. That's why Aunt Nellie wrote to him (misspelling his name, as she often did):

"Wallace, Please tell mama for me that I received the scarf and am much pleased with it for it is pretty and I wanted one. I hope you will be a good boy for mama and papa and take good care of the little brothers. With love from Aunt Nellie"

Wallis's family was living on Lancelot Avenue in Cleveland, in a home built by Nellie's brother--Wally's father, James Edgar Wood. He was a builder who would construct a home on spec, move his family into it, finish it, and sell it while building the shell of the next spec home. The family moved many times in this manner.

Nellie was a beloved aunt and a devoted sister to her 16 siblings. She lived in Chicago and sent postcards to members of this large family on many occasions. There were also visits to and fro, and gifts on occasions like the birth of a baby (I know from my husband's baby book).

Nellie was a caring person, literally: Her occupation in the 1930 census was "caretaker, nursery" and included in her household, along with her husband, was a "boarder" who was 2 8/12 years old, presumably an infant being cared for by Nellie. In other censuses, she was listed as a seamstress.

Nellie was widowed twice, having married Walter Alfred Lervis Sr. in 1884 and, later, Samuel A. Kirby, a barber. She outlived all of her sisters and brothers, even though she was far from the youngest of the 17 children of Thomas Haskell Wood and Mary Amanda Demarest.
Posted by Marian B. Wood 2 comments:

Here are two stories of Christmas Eve weddings among members of my grandparents' families. 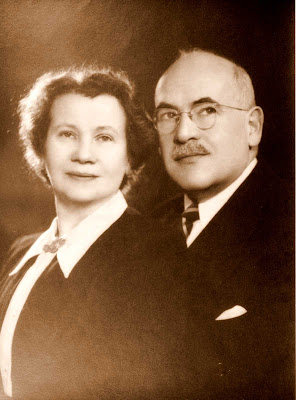 They were married at City Hall and kept their marriage secret from the family for a number of weeks.

The photo at right, courtesy of my 2d cousin, shows Mary and Edward in middle age, still a devoted couple. 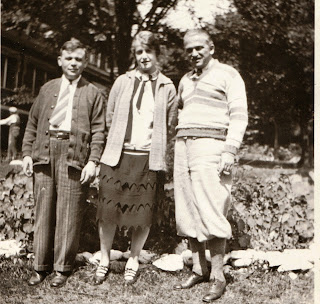 Both Alex and Jennie worked in the garment industry. It was said that Jennie could sew a copy of any fashion after seeing it once, without a pattern. In fact, she sewed dresses for the bridal parties of many Farkas relatives.

Alex was one of the prime movers of the Kossuth Society in New York, which helped take care of sick members. This is where he met his future bride.

The photo at left shows Jennie with her husband Alex (at right) and her brother-in-law Teddy Schwartz (at left, hi Grandpa!). Teddy was married to Alex's older sister, Minnie Farkas (hi Grandma!).
Posted by Marian B. Wood No comments: 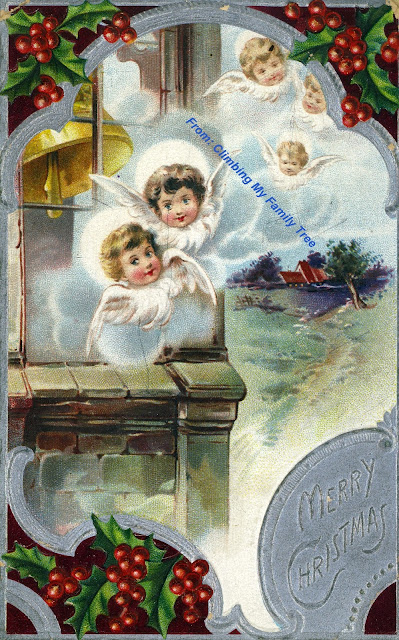 In 1909, Wallis W. Wood (hubby's uncle) received this pretty postcard from one of his aunts, addressed to his parents' home in Cleveland, Ohio. As usual, she (like everyone else) didn't spell his first name correctly, but the sentiment was there, 106 years ago this week. 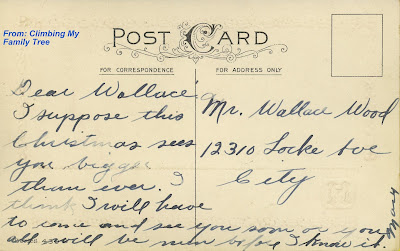 She wrote: "Dear Wallace, I suppose this Christmas sees you bigger than ever. I think I will have to come and see you soon or you all will be men before I know it. Mary."

Merry Christmas!
Posted by Marian B. Wood No comments: 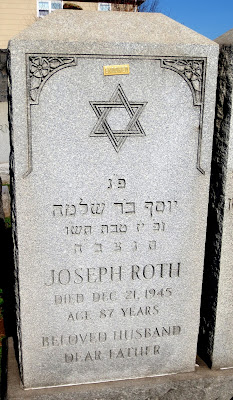 Josef's inscription confirms he was the son of Shlomo (Solomon).

Julia's inscription says she was the daughter of Menacham Dov, the Cohain (priestly tribe).
Posted by Marian B. Wood No comments: 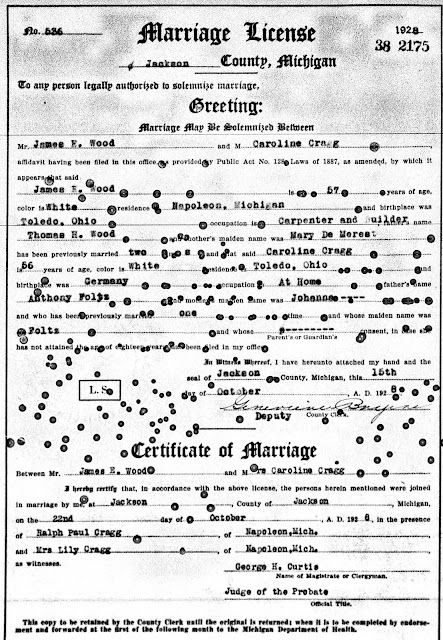 Then Mary died in 1925 at age 55. James remarried almost exactly a year later, in 1926, to Alice Hopperton Unger (1884-1930), who was very possibly the housekeeper for the Wood family (according to family stories).

But some time in the next two years, James and Alice divorced and James married for a third time.

I knew to look for this third marriage because cousin Larry, the Wood genealogist, said that the family put James together with a relative's widowed mother-in-law named Caroline Cragg (1871-19??).

For the past few years, there's been no sign of this Wood-Cragg marriage license. Until yesterday.

The document confirms James's previous two marriages and Carrie's previous one marriage. The witnesses: Carrie's son Ralph Paul Cragg (1889-1969) and his wife, Lilly E. Hodgeson Cragg (1889-1962). Everybody resided in Napoleon, Michigan except the bride, who came from Toledo, Ohio for the wedding.

James and Carrie remained in Jackson, MI according to the 1930 Census. By 1939, however, they weren't together for some reason, because James was living with his oldest son, Edgar, at the time of his death. I still don't know when/where Carrie died, but I'm looking.
Posted by Marian B. Wood No comments: 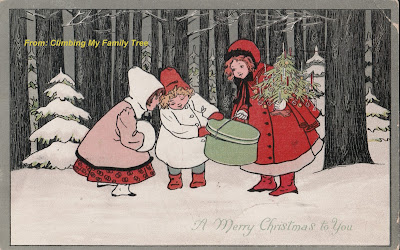 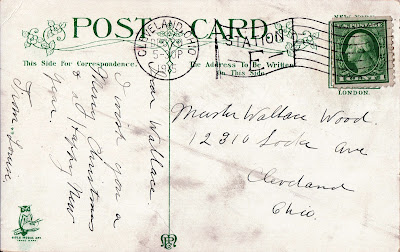 Maybe one glamorous star of stage and screen isn't enough for the Roth branch of my family tree. We know that the 1940s Broadway and Hollywood star Gloria Warren  (original name: Gloria M. Weiman, daughter of Herman Weiman and Julia Weiss Weiman) was a cousin. She was related through the Farkas-Kunstler cousin Bela Roth (1865-1941), who frequently visited the Farkas Family Tree meetings--my mother's side of the family.

Cousin Alex "Sandor" Roth (1892-1949) was the oldest son of Bela Roth, born in Vasarosnameny, Hungary. The Roths came to New York in the early 1900s. While living in the Boston area and working in a car dealership (a family occupation in the Roth line), Alex married Blanche "Blanka" Schwartz (1897-1986). I've sent for Alex's Social Security application, and hope to have it before the calendar clicks over to 2016.

Meanwhile, I'd heard a whisper that Blanche Schwartz was some kind of cousin of Tony Curtis, whose original name was Bernard Hershel Schwartz. So I've been trying to find out more.

An experienced researcher interested in the Schwartz connection to Tony Curtis shared with me the following information:
Because this researcher suspected that Blanche's parents were buried in Mount Moriah Cemetery in New Jersey, I took a field trip and photographed their stone, shown above. Translating, Frank is the son of Shalom, Frieda is the daughter of Dov Ber.

The researcher also discovered that Frank Schwartz's mother's maiden name is Weiss. Remember Weiss? That's the maiden name of Gloria Warren's mother. Coincidence? Very possible, given how many Weiss families lived in that area of Hungary. But then again, there were a number of intermarriages with the Weiss family on my mother's side.

To discover the connection between Blanche Schwartz and Bernard Hershel Schwartz will require investigating older ancestors in the Mateszalka records. This is going to be quite a challenge!
Posted by Marian B. Wood No comments:

Friday's Faces from the Past: The Schwartz Twins in Summer 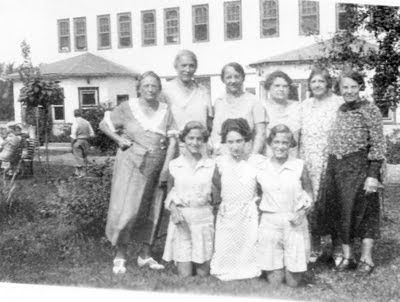 Today would have been the birthday of the Schwartz twins, Daisy (Mom) and Dorothy (Auntie).

They were in a summer colony in upstate New York for a week or two of vacation, as was the custom for my family's New York City dwellers who wanted to temporarily escape the heat, noise, and dirt.
Posted by Marian B. Wood No comments: 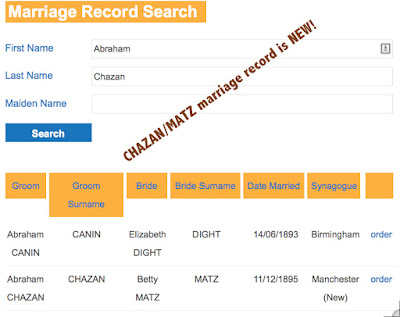 Remember Cyndi's List? I returned to it yesterday to look for any new links to Jewish genealogical resources for my Birk-Chazan-Mitav research.

Isaac Birk was my paternal grandpa from Lithuania and his aunt was, I believe, Anna Hinda Mitav who married Isaac Chazan and settled in Manchester, England in the late 1880s.

Under the Jewish resources on Cyndi's List, one of the categories is "Societies and Groups." I scrolled and clicked until I came to the Jewish Genealogy Society of Great Britain. There I found a link to the search page for United Synagogue Marriage Authorisations--a recently-updated index to rabbinical marriage records from 1880 through 1901.

Interestingly, both my grandpa Isaac and my grand-uncle Isaac had brothers named Abraham. But I never knew the maiden name of Abraham Chazan's wife Betty, and I hadn't checked records again for more than a year.

Then yesterday, I plugged in Abraham's full name, his wife Betty's name, and the year of their marriage (1895, which I knew from BMD records in UK). See the word NEW? Now I have Betty's maiden name, Matz.

So Tuesday's Tip is try, try again, because new records appear online every day.
Posted by Marian B. Wood 7 comments: