In 1959, hubby Wallis E. Wood was an undergrad at Columbia University's School of General Studies (GS). He wound up being one of the founders of that school's weekly newspaper, the Columbia Owl, which won an award for campus journalism. 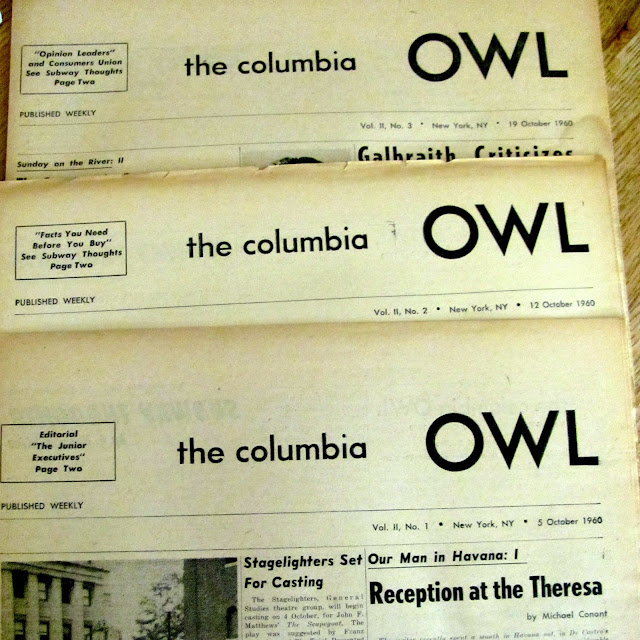 When Wally enrolled at GS, there was no newspaper, and a group of students began a mimeographed paper of such low quality that Wally and his classmates, Thomas Simpson and Michael B. Conant, created a parody issue of it. That got the administration's attention, and somehow Simpson received a budget to begin a real GS newspaper. Simpson was editor and Conant managing editor. 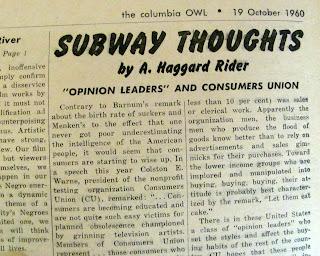 In 1960, Wally was features editor and, under the byline "A. Haggard Rider," he wrote a regular Subway Thoughts column (left).

By 1961, Wally was managing editor while Simpson remained editor. As of the end of May, 1961, the paper was so successful that it had expanded to 8 pages.

Simpson's job took him to Chicago, Wally moved up to become the Columbia Owl's editor for 1962. These were exciting times to be on campus, with all kinds of political issues to cover and other news and commentary.

In fact, in 1963, the Columbia Owl won an award for distinguished campus journalism covering international affairs, which Wally accepted at the National College Editors Conference in New York City.

The b/w photo above shows Wally holding the award and receiving a check for the Columbia Owl from Sterling Fisher, Exec Director of the Reader's Digest Foundation, and Ruth Hagy Brod, the conference chair. 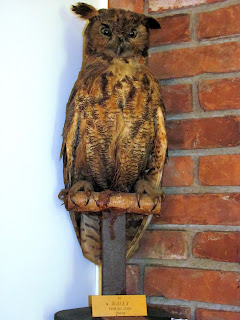 By that time, however, Wally was so wrapped up in the newspaper that his academic standing was in peril. He left Columbia and got a reporting job on McGraw-Hill's Electrical Merchandising Week, and Larry S. Stewart became Owl editor.

As a going away present, the newspaper staff gave Wally this stuffed owl, with two inscriptions:

Presented to Wallis E. Wood in recognition of his contributions to the Columbia Owl 1963
Posted by Marian B. Wood 3 comments:

Hubby's g-grandparents (Edward George Steiner and Elizabeth Jane Rinehart Steiner) had 7 living children (not counting the newborn who died and Elveretta, who died in early childhood). I think that Brice Larimer McClure, who married Floyda Steiner, kept this handwritten listing of his wife's family's births and deaths. 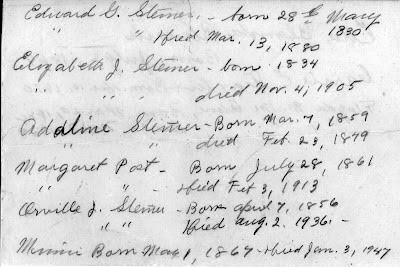 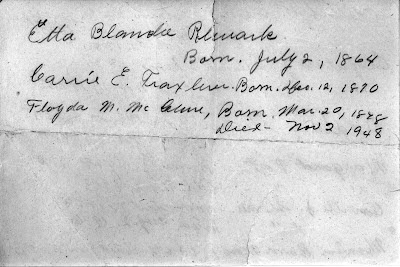 Margaret Steiner Post doesn't appear in any of the Ohio death records, so I strongly suspect she died in Knoxville, where she and Elroy lived (according to the 1900 and 1910 Census notes). Just my luck, Tennessee required statewide recording of deaths up until 1912 and from 1914 on, but NOT in 1913.

After a discussion with a research librarian at the Knoxville Public Library, I'm sending info to them to request a lookup of an obit on great-aunt Maggie or, if available, a death cert from Knox county. To hedge my bets, I'm also going to ask the Upper Sandusky library to do an obit lookup. Fingers crossed!** 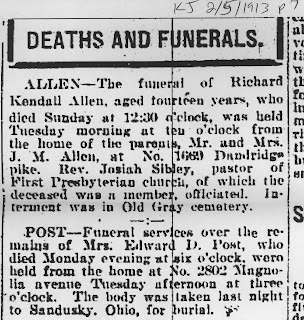 ** UPDATE: Knoxville kindly sent me the above obit for Margaret Steiner Post. Her husband apparently decided to go mainstream by changing his name from Elroy to Edward, and she herself is identified only as MRS Edward D. Post. But this is definitely Great-aunt Maggie. After Maggie died, Elroy remarried a few years later and with his new wife, Merida, had one child--who they named Margaret Post. Hmm.....
Posted by Marian B. Wood No comments: 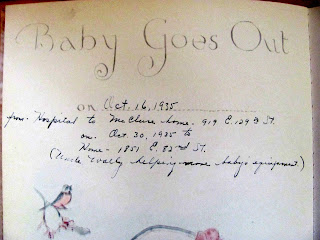 My late mom-in-law kept a baby book about her older son, my hubby. It's full of names of relatives and friends to check against other records during my genealogy research.

Mom and baby stayed until they were ready to go home to 1851 E. 82nd Street in Cleveland, Ohio. Thanks to the "Cleveland Memory Project" and its online archive of old photos, I know this was a street of small apartment buildings (walkups about 4 floors high, max) and a few big rooming houses (like the one Edgar Wood lived in just prior to his marriage). 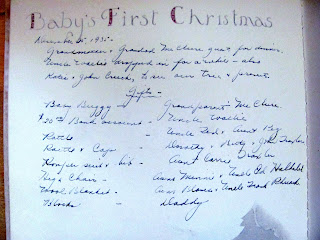 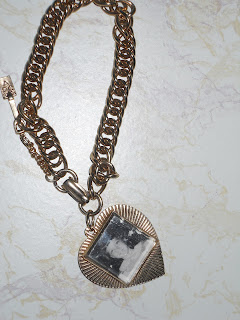 Here are two views of a sentimental piece from my mother's jewelry box, a "junk jewelry" bracelet featuring photos of Sis and me, unusual for two reasons. 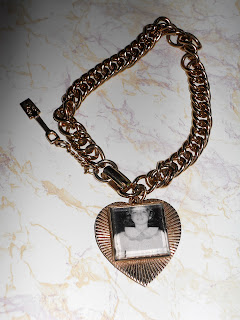 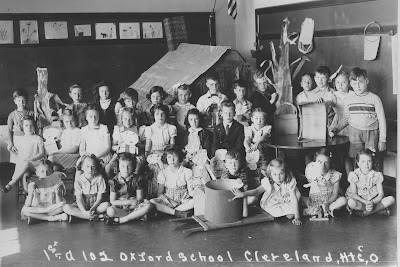 Circa 1942, here's hubby in his first grade class at Oxford Elementary School in Cleveland, Ohio.

His mother, Marian Jane McClure Wood, wrote out the names of classmates on the back of the photo. Transcribed, they are:

She's still a mystery, this Louisa A. M. Slatter who married John Slatter Sr. (hubby's g-grandfather) sometime between 1891 and 1895.

I've yet to find out when/where John Slatter Sr's first wife died--she was Mary Shehen Slatter, b. 1840 in Marylebone, Middlesex, England. John was born in 1838 in Oxfordshire, England. John & Mary's children moved to Canada and the US, and by the late 1880s, John had moved to Cleveland, where his daughter, Mary, later married James Edgar Wood. I speculate that John (a wallpaper cleaner and hanger) met James Edgar Wood (a builder) in Cleveland and that's how Mary met her husband (and became hubby's grandparents).

But now back to Louisa, who's an unknown. Her obit appeared in the Cleveland papers on February 26, 1895. It reads:

So what do I know about Louisa? According to the cemetery record, Louisa was white, a native of England, and died of Brights disease. When John Slatter Sr. died, he was buried next to her.

I've tried calling, writing, and e-mailing the Cuyahoga County clerk's office asking about whether a death cert exists for Louisa Slatter. In the past, I've had good luck with them, but this time, after 6 months of intermittent requests, no response (perhaps because no record exists in their files). Nor have I ever located a marriage record for Louisa and John. I'm going to try to find some connection with Cincinnati, given the obit's mention of it.

Any other ideas about how to learn more about Louisa? Please let me know! And many thanks.
Posted by Marian B. Wood No comments: