Those Places Thursday: The Bronx of my Burk family 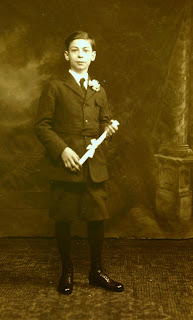 On this day 107 years ago, my father (Harold Burk) was born at home, 77 E. 109th Street in Manhattan, the second of four children of Isaac Burk and Henrietta Mahler Burk.

Until the mid-1920s, the Burk family lived in a series of tenements in upper Manhattan. Dad used to tell stories of how, on a summer's day, the family would pack a big picnic lunch and take a street car to the top edge of Manhattan. There, they would pick up a horse-drawn conveyance for crossing into the Bronx.

It was a full-day outing, between the slow transportation and then enjoying lunch and a stroll or nap in the park. A welcome change from the heat, noise, and bustle of Manhattan, he remembered fondly decades later.

By 1930, the Burk family had managed to move uptown, with three of the four children working and contributing to the household coffers. They lived at 1580 Crotona Park East in the Bronx, a leafy, "suburban" part of the city.

Today, a single family home sits on the site. But 80 years ago, 20 families lived in a tenement at that address. Looking at the 1930 Census, every family in the building was either headed by an immigrant or included an immigrant (sometimes as a boarder). Most were from Russia, Poland, Romania, or thereabouts.

The Burk family's next-door neighbor in the apartment building became a character reference for Dad in 1931. He was applying for a "fidelity bond" as the first step toward his dream of becoming a travel agent.

Two other character references shown on the bond were, in reality, family members: Louis Volk was married to his aunt, Ida Mahler; Joseph Markell was married to another aunt, Mary Mahler. Both lived on Rochambeau Avenue in the Bronx, 3 miles uptown from the Burk family.

Except for the years he served in World War II, Dad lived the rest of his life in the Bronx, where I was born and spent my early years.
Posted by Marian B. Wood 11 comments:

Ancestor Appreciation Day: Seeing Possible Futures in the Family's Past 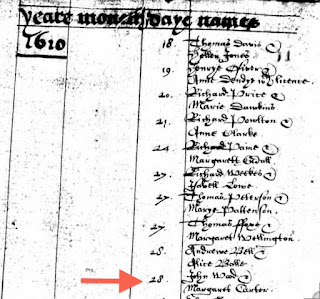 On Ancestor Appreciation Day, I'm struck by the insights of Alison Light, in Common People--In Pursuit of My Ancestors. She writes:


"As I have written this book, many questions have weighed on my mind but one more than any other: why do we need these stories of people we can never know? What is it we are after and why do we so regret not talking (or not listening) to our elders when they were alive?"

Her answer is that we want "to apologize to them for not realizing that they too had lives like ourselves--fallible, well intentioned, incomplete--and to understand how mistakes were made that resulted in our lives; how much was accident, how much choice." She adds that we might seek to see our parents as young again, "full of possible futures."

An eloquent and poignant passage that resonates with me on this day, in particular. I appreciate that my ancestors may not have always acted out of choice but out of necessity or desperation or simply severely limited options. Each ancestor had any number of possible futures but one that actually became his or her path and ultimately my past.

If these ancestors had gone down a different path my husband and I would not be here today. Not infrequently, their paths were arduous (braving dangers to come to America, never again returning to their country of birth, making sacrifices to survive). Not infrequently, their personal dreams had to be put aside for the sake of their siblings or parents or children. In another age, who knows what possible futures they would have chosen for themselves?

With possible futures in mind, I want to recap what I know about the earliest ancestors identified in my husband's tree.

Friday's Faces from the Past: Floyda's Birth Record (Delayed by 66 Years) 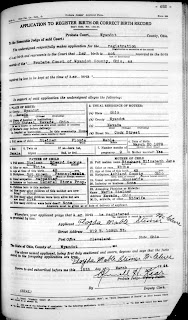 Floyda was born at home in Nevada, Wyandot county, Ohio. But apparently, her birth was never officially recorded until she filed an application to register her delayed birth record 66 years later.

To prove where and when she was born, she and two sisters signed an affidavit swearing to the place (the family home on Cook Street) and the date (March 20, 1878).

Sadly, Floyda lived only four more years after having her birth officially recorded by the state of Ohio. Floyda's husband, Brice Larimer McClure (1878-1970), outlived her by more than two decades.

Intriguingly, the name of the midwife shown on Floyda's affidavit is Maria Steiner, also of Nevada. A relative of Floyda's father, Edward? My research indicates Edward had a younger sister Mary, born in 1846, who married Morris Sutherland in 1884, well after Floyda's birth--and after her brother Edward's death. I don't know whether Mary was Maria.
Posted by Marian B. Wood 2 comments:

Tuesday's Tip: Put a Sleeve on It! 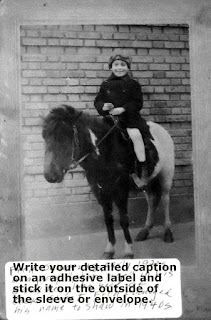 Before I become an ancestor, I want to caption all the old family photos in my collection. I'm on my way, but it's going to be a process not to be finished in a day.

First, I bought archival boxes to lay photos flat, organized by family, rather than having them filed vertically in a folder. Next, I put every single photo into a clear, acid-free, protective sleeve or resealable envelope for long-term storage and protection. (Vendors who offer boxes and sleeves are mentioned on a number of sites, including on Cyndi's List.)

The recommendation to "put a sleeve on it" comes from multiple expert sources, such as:
Now when I have a few minutes, I choose one of the sleeved photos, write a caption on a separate adhesive label, and stick it to the front or back of the protective sleeve. Later, I'll type the captions, print them, and put them into the boxes with the photos (not inside the sleeves or touching any original photos).

The caption on this photo explains not only who the boy on the pony is, but why a pony is standing on the sidewalk in front of a Bronx apartment building, circa 1919. Future generations may not know that entrepreneurs brought ponies to street corners, offering "photo opps" for kids of city dwellers at a low price.

I really want my heirs to know! And for now, a scribbled caption is better than no caption at all, right?

PS: Don't forget to inventory the photos. See "sample templates" on the tab above right.

Want more detail on "how to" sort photos, preserve them, and decide what to keep/what to give away? Please check out my new book, Planning a Future for Your Family's Past.

Posted by Marian B. Wood 6 comments:

Labels: before I become an ancestor, photos, Planning a Future for Your Family's Past, Tuesday's Tip 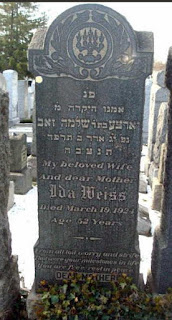 Ida Farkas, a cousin of my Grandma Minnie Farkas, was born in Botpalad, Hungary (where many Farkas ancestors were from).

She married Herman Weiss and, with four children, they came to New York just after the turn of the 20th century. Soon they had two more children together. Herman worked as a presser in the garment district.

Unfortunately, Ida died of pneumonia in 1924, at the age of 52; Herman lived another 19 years.

Both are buried in Montefiore Cemetery ("Old Montefiore") in Queens, NY. Thinking of these cousins on Tombstone Tuesday.

Posted by Marian B. Wood 6 comments: