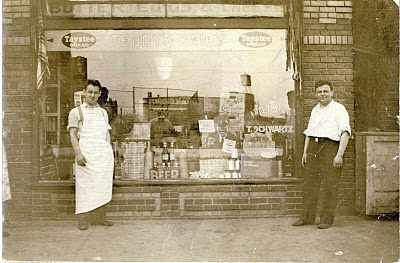 Hidden among 1970s photos (stored in a Clairol electric roller box) was a large brown envelope with a Macy's logo and the address "New York 1, New York."

Inside that pre-Zip code envelope was the above photo of my grandfather Teddy (right) in front of his grocery store, Teddy's Dairy, in the Bronx. He was 47 at the time, since the back of the photo includes a hand-written date of 1934. I didn't realize he was a notary (see window). At the left margin of the photo is a bit of dress, which it's tempting to think is being worn by my grandmother Minnie.

This is a wonderful find; we suspect my aunt put the photo into one of her friend's envelopes (the friend worked at Macy's) and stashed it away. What else is hiding in the boxes in my sister's house?!
Posted by Marian B. Wood 3 comments: 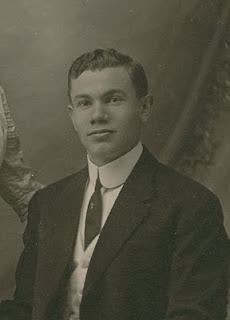 Actually, he's my great-uncle Sam Schwartz, and I've been trying to find out where and when he died. During yesterday's expedition to a nearby Family History Center, I looked at microfilms showing NYC death indexes for the 1950s. Lots of Sams and Samuels. Now I've narrowed the possibilities down to 15 or so entries. Which one is the real Uncle Sam?

The "informant" would have been Sam's second wife, in all probability, and she may not have known Sam's actual birth date or place. (I only know what he reported on his WWI and WWII draft forms, which may or may not be accurate.) I'm going to assume she knew.

Also, I don't know which borough he was living in when he died. I've been assuming that he stayed on in the house he owned while married to his first wife. He probably owned it clear and free by the time he died. I'll check land records at another point.

My 1st cousin (once removed) remembers that he had a heart attack while mowing his lawn, so that suggests he died in a warm month (roughly May through September).

Only one of the entries matches all of these criteria. I'm going to go for it--spend the $15 to find out whether that's the Uncle Sam I've been trying to find. Stay tuned!
Posted by Marian B. Wood No comments: