She was pretty and witty, not to mention being passionate about social justice. She fought like a tiger for what she believed was right!

Miss you, li'l sis.
Posted by Marian B. Wood No comments: 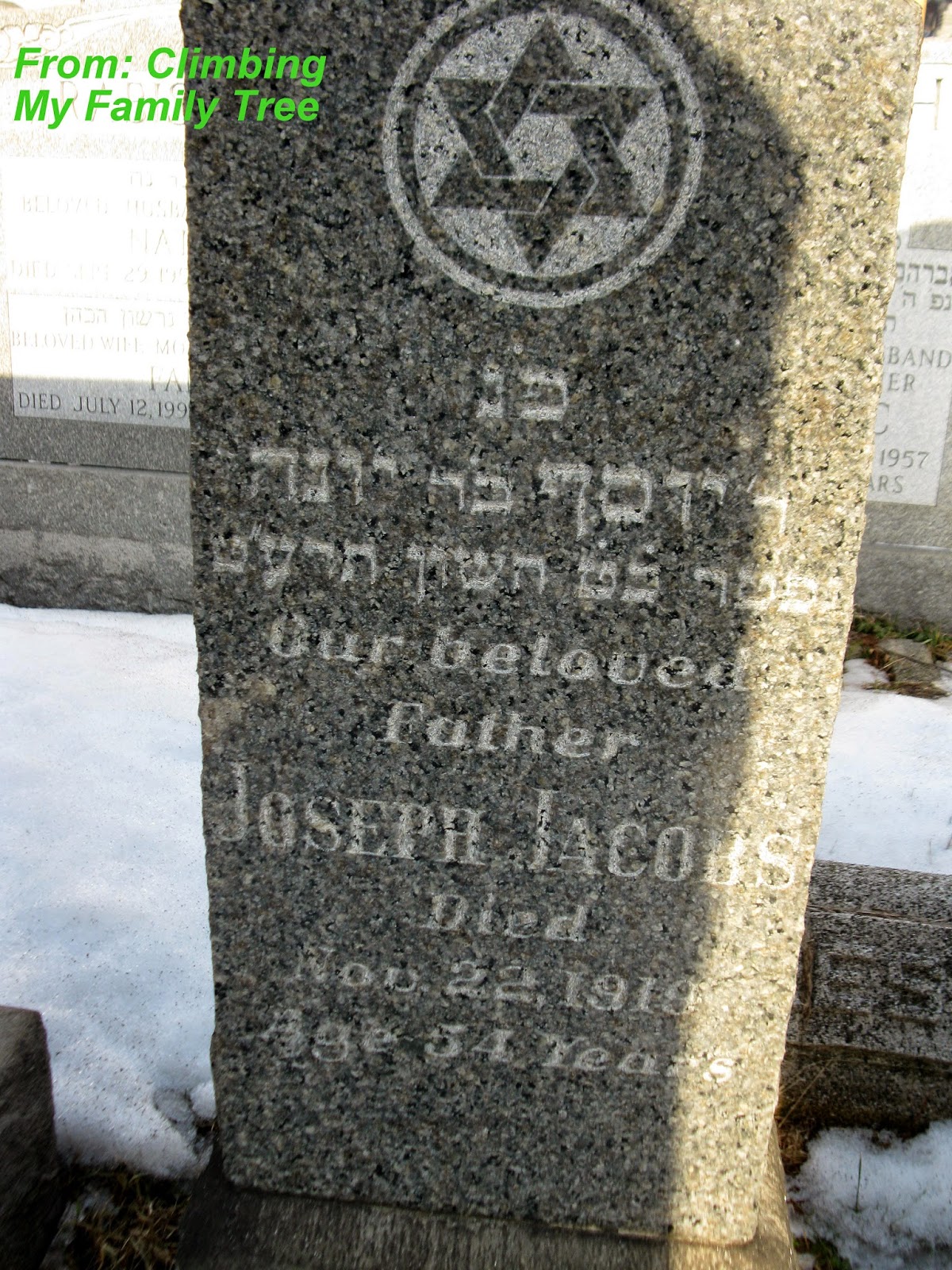 My great-grand uncle Joseph Jacobs (son of great-great-grandma Rachel Shuham and great-great-grandpa Jonah Jacobs, married to Eva Mikalovsky) was a brick wall for years. Great-aunt Ida (sister to my grandma Henrietta Mahler Burk) kept a notebook of birth/death dates and she wrote that Joe, her uncle, died on November 22, 1919.

Well, not exactly, but now I understand why that date stuck in her mind.

Only last month, I located Joe in Mount Zion Cemetery, Queens, NY, with a death date of November 3, 1918 (Findagrave #81028376). That death date was confirmed by his New York City death cert.

Today the cemetery sent me a photo of Joe's headstone, which says he died on November 22, 1918.

The answer has to do with the Hebrew calendar. Elsewhere in Great-aunt Ida's notebook, she records death dates according to day and month in the Hebrew calendar. So I checked two of the death dates of Joe Jacobs (Nov. 3, 1918 and Nov. 22, 1919) and it turns out that both are the 29th of Cheshvan. That's what the stone says, too (on the line just above Joe's name in English).

Because of the tradition of erecting the gravestone one year after someone passes away, Great-aunt Ida apparently used that later date as Joe's date of death. And the stonecarver who created Joe's stone was obviously given the Hebrew calendar date in 1918, not the secular date, which is why the stone says November 22nd.
Posted by Marian B. Wood 1 comment:

Remembering the Schwartz and Simonowitz families from Ungvar 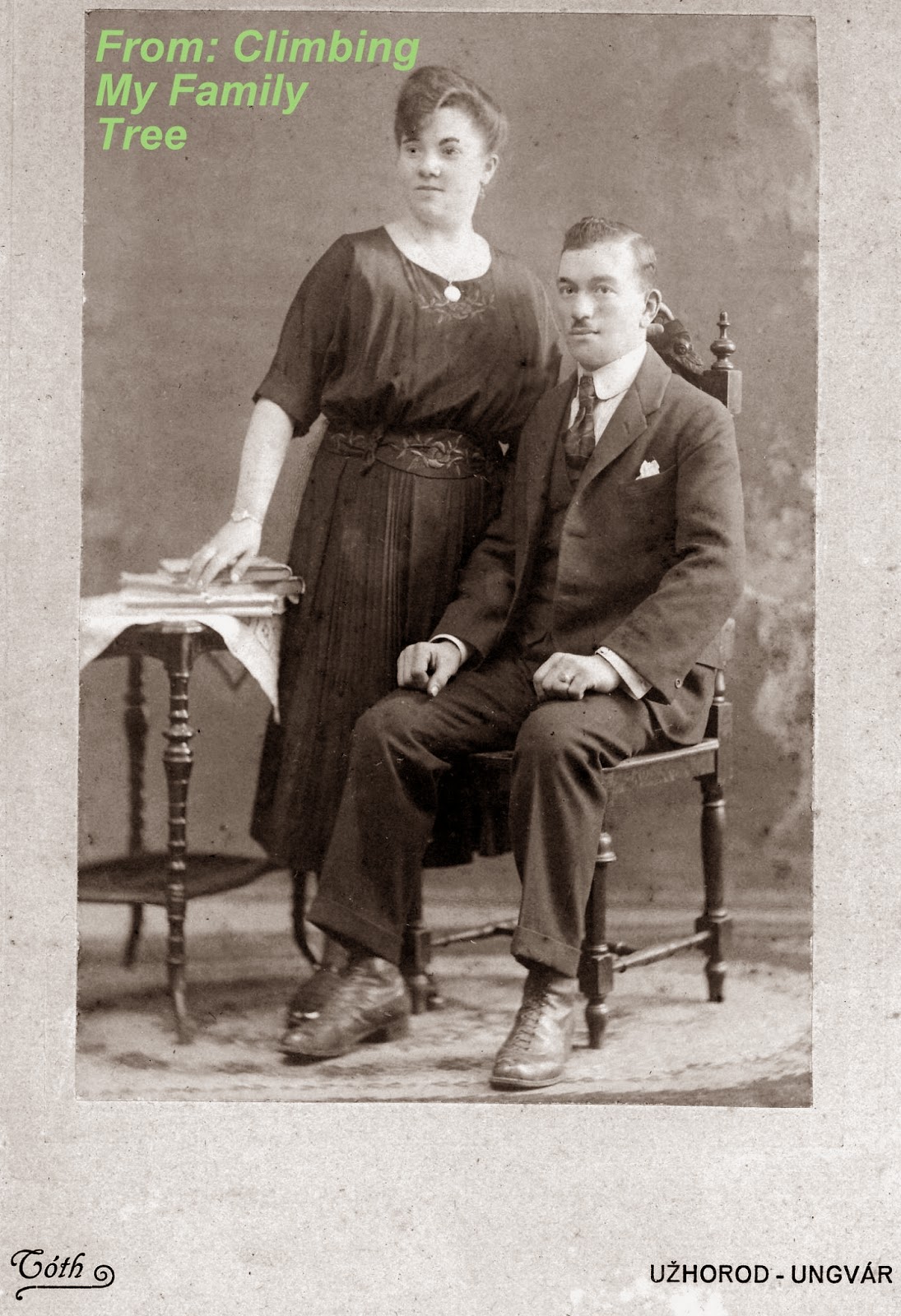 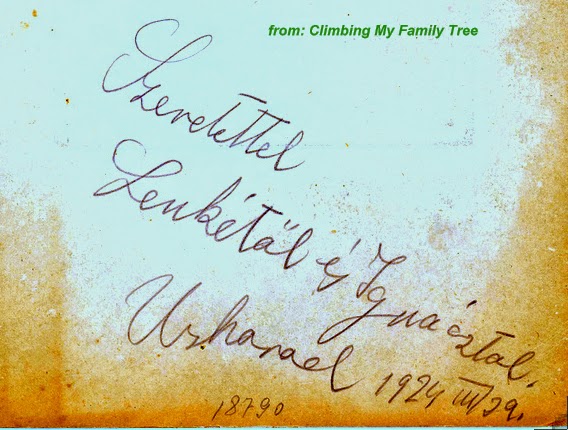 On Yom HaShoah, a day to remember victims of the Holocaust, I want to pay tribute to my grandpa Tivadar (Teddy) Schwartz's family, all born in Ungvar (then Hungary, now Uzhorod, Ukraine). Tragically, all but one of the Schwartz family living in Ungvar perished in the Holocaust. Teddy's aunts, uncles, and cousins in the Simonowitz family (kin to his mother Hanna Simonowitz) also perished.

Above, probably one of Teddy's sisters and her husband, in a studio photo they sent to Teddy some time after he left and came to New York City. The inscription, shown at right, reads: "Affectionately, Lenke and Ignacz, Uzhorod, March 29, 1924."

Teddy's older brother Simon (who changed his name to Samuel) and his younger sister Mary came to New York, but the rest of the siblings remained in Hungary.

The only Schwartz survivor was Teddy's beloved niece, Viola, who now lives in Israel with her family. We're blessed to be in touch with them!
Posted by Marian B. Wood 2 comments:

Sentimental Sunday: George Larimer's elopement "like a thunder clap from a blue sky"

On July 4, 1899, George Ainsworth Larimer boarded an interurban train in Goshen, Indiana, bound for Chicago. Seemingly by accident, Cora May Lutz was on the same interurban train--in the same car--bound for an aunt's house in Grand Rapids, Michigan.

Here's how the Goshen Midweek News describes what happened next (in the Nov. 15, 1899 issue):

"The fall of great cities has been planned in very short time, so it is presumed Mr. Larimer and Miss Lutz accidentally became aware of each other's presence on the car and by the time they reached Dunlaps, negotiations had been closed for an elopement..."

By the end of the day, they had secured a marriage license in St. Joseph, Michigan, been married, and were on their way home. The newspaper continues:

"They were away from home only a short time, and on returning, the members of the groom's family suspected what had occurred, telling him it was generally known and in the papers. He assumed an indignant air and denied the allegation and was greatly relieved on finding the family had employed that matter of investigating his suspected matrimonial affairs...Accordingly the marriage was this morning announced and it came like a thunder clap from a blue sky."

This clipping is part of my newspaper research into the relationships among the members of the Larimer, Work, Short, and Bentley families.
Posted by Marian B. Wood No comments:

Surname Saturday: The long story of the Short family (and Larimer too)

The Short family was constantly in the news in Lagrange county and Elkhart, Indiana. Apparently the Short and Larimer families were acquainted and related before they came to the States in the 1700s.

One of Dr. Larimer's physician nephews was Dr. William H. Short (1844-1920), born in Eden township, Lagrange county, Indiana, one of 11 children of farmer Thomas Short and his wife, Margaret Larimer.

For a long time, Dr. William Short was in practice with his brother, Dr. John Short, and his son-in-law, Dr. Carlos C. Rozelle (married to Vera Short). Another doctor brother was Dr. Isaac W. Short. 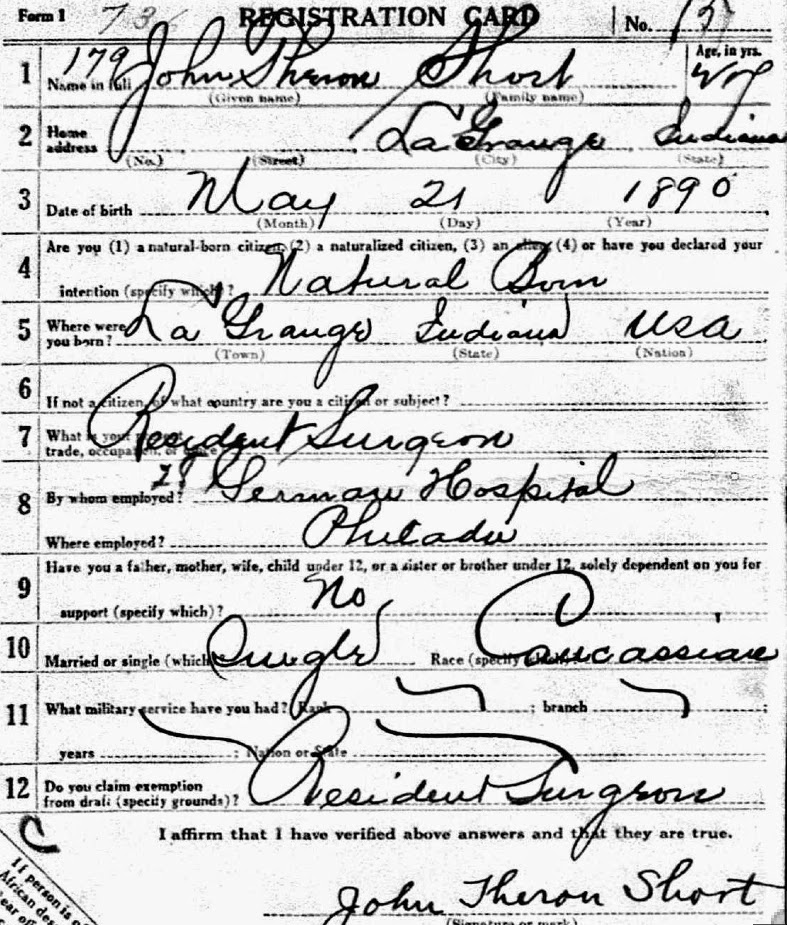 William passed his love of medicine to his son, Dr. John Theron Short, who was the resident surgeon at German Hospital in Philadelphia, circa 1917 (see WWI registration card). He was Lt. Short when he served as an assistant surgeon in the 9th Naval District during the war.

My Philly Cuz tells me that German hospital changed its name to Lankenau Hospital after America became involved in WWI. Now it's Lankenau Medical Center and still highly regarded.

The Indiana newspapers reported often on the Short doctors and dentists. One testified in a case of attempted murder (a physician shot a young lady!), but other times the reports were of setting bones, checking teeth or attending to feverish patients.

I'm still checking for the obit of Thomas Short, the farmer whose sons grew up to practice medicine and dentistry, inspired by their uncle.
Posted by Marian B. Wood No comments:

Wordless Wednesday: From the In-Laws' Attic in Cleveland 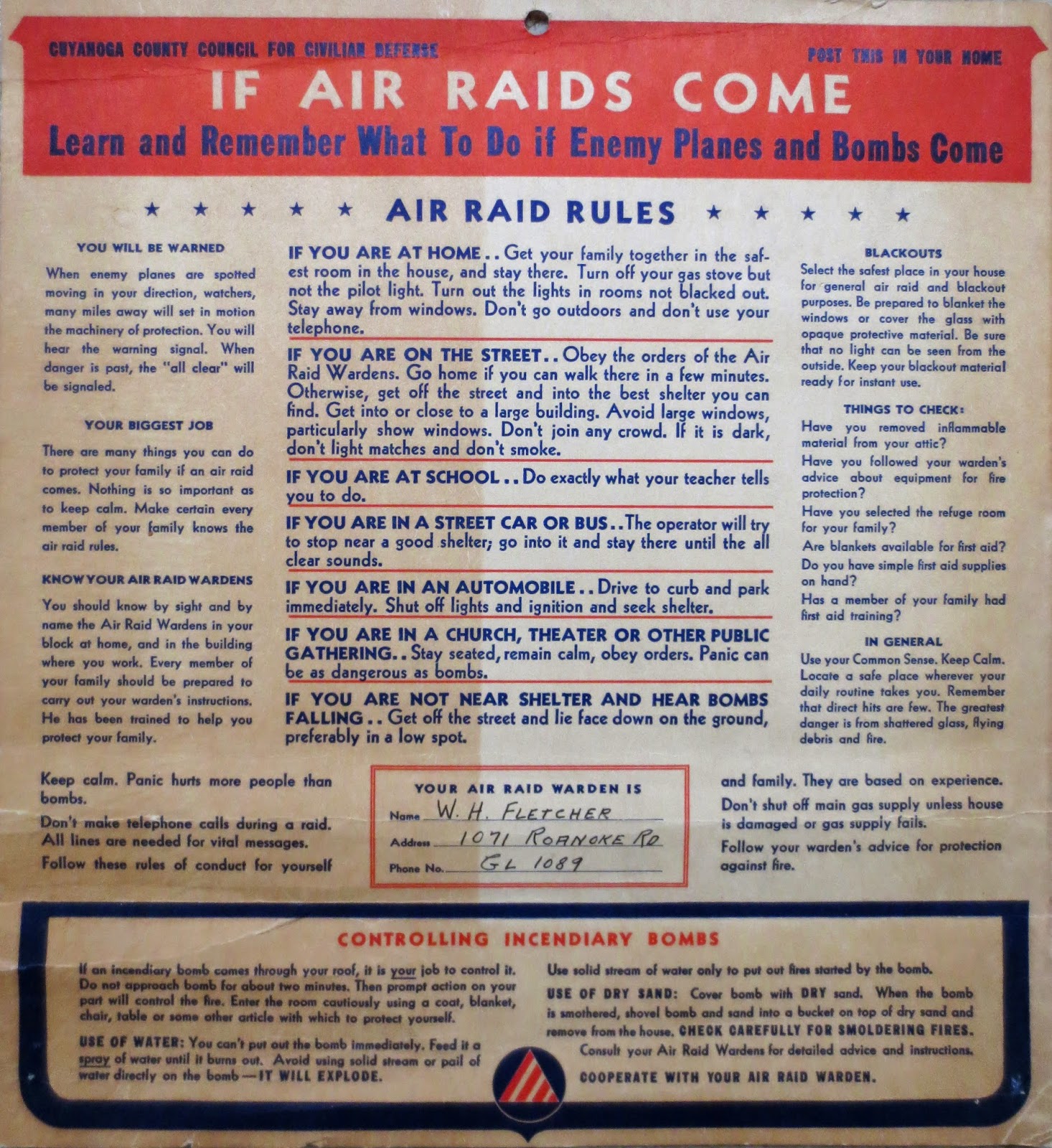 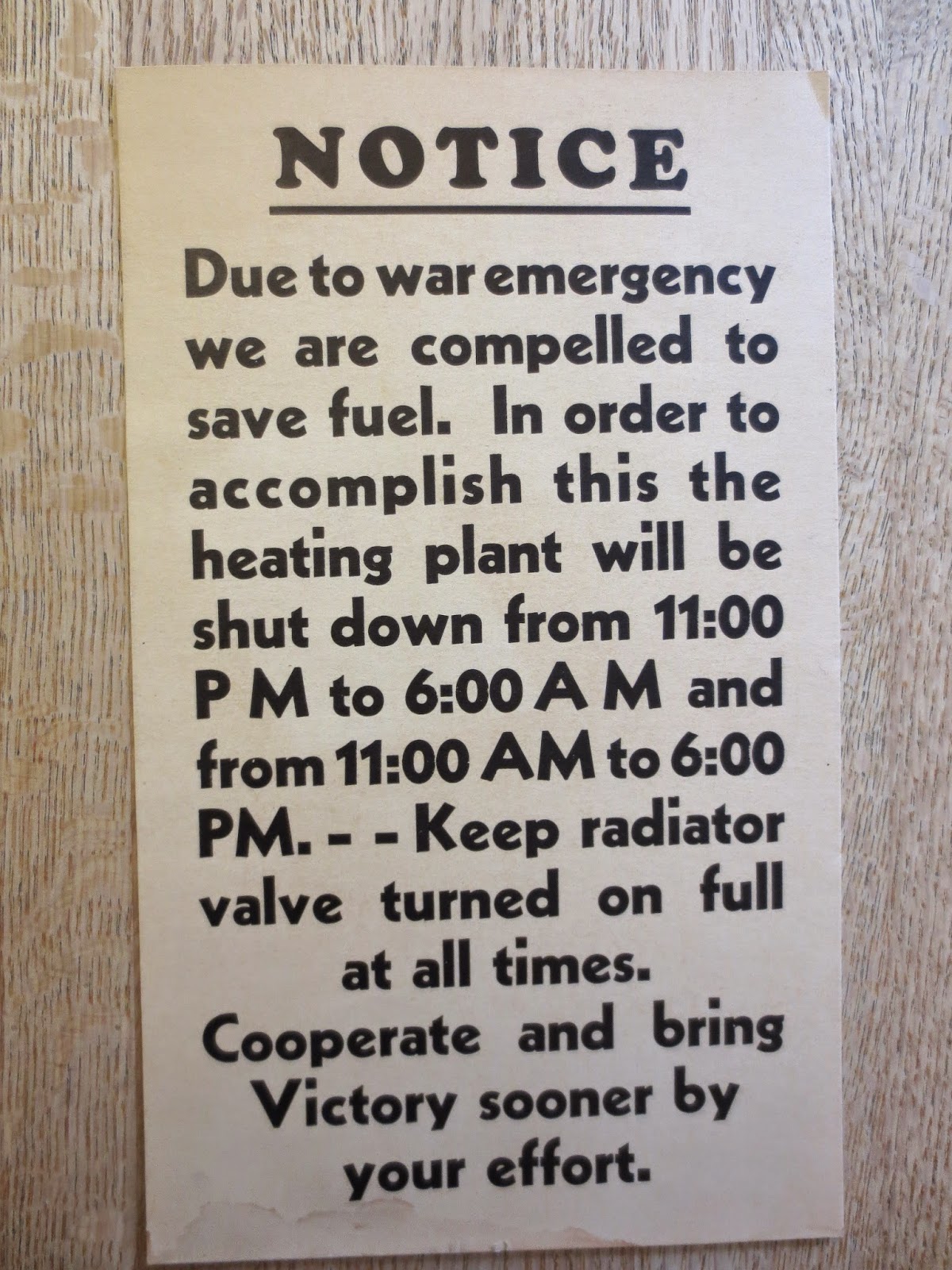 My late father- and mother-in-law (Edgar James Wood and Marian McClure Wood) held onto this WWII poster for decades, and it remains in excellent shape. Hubby remembers it being stored in the attic of their Cleveland Heights home during the 1950s. They took the poster with them when they moved in the 1970s and moved again in the 1980s. We just asked the Western Reserve Historical Society if it would like this as a donation.*

*UPDATE: The historical society said yes, and it is getting the air raid poster above and the fuel ration notice at right.
Posted by Marian B. Wood 2 comments: 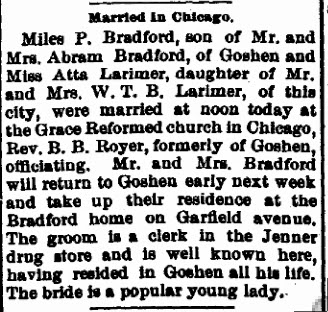 I've been having success using newspaper archives to learn about ancestors' lives--but I was also reminded today that searching for full names can turn up valuable articles from free news sources.

Atta Elizabeth Larimer was 26 when she married 29-year-old Miles Powell Bradford on Thursday, May 8, 1902 in Chicago. Atta was my hubby's 1st cousin 2x removed, the older daughter of William Tyler Bentley Larimer and Elizabeth J. Stauffer.

Both bride and groom lived in Goshen, Indiana, so why marry in Chicago? That question had bothered me since I found out about the marriage via an Ancestry hint, before I accessed paid newspaper archives for Goshen.

From the above excerpt (Goshen Daily Democrat, May 8, 1902), it appears one reason to travel to Chicago was to be married by the Reverend B.B. Royer who had previously been a clergyman in Goshen. Because the announcement appeared the same day as the marriage, it was evidently not an elopement--in fact, another newspaper article within a day or two reports on Atta and Miles returning home from their wedding trip to Chicago.

By 1930, Atta and Miles were the parents of three (Lucy Elizabeth, William Abraham, and Joseph Miles Bradford). Miles told the census he was the proprietor of a retail grocery store. After his wife Atta died in 1936, Miles was kept company at the grocery store and at home by his younger son, Joseph Miles Bradford--a conclusion reached after reading the 1940 census and seeing them living together and working together.

I don't know about the funeral, but I do know that a search for his full name, in quotes, turned up the newspaper obit (for free) of his widow, Lois Evelyn Scott, and a lot of info about his life after the war. Joseph and Lois ran Bradford's Grocery in Goshen for decades, picking up with Joseph's father Miles left off.

Most important, I learned that Joseph and Lois met and married in Hattisburg, Mississippi, while he was in the Army Corps of Engineers during the war. They had three children, whose names I now know, courtesy of that free obit.
Posted by Marian B. Wood 4 comments: