Fast-forward 8 years and I'm still researching his family--and enjoying new connections with my cousins across North America and across the Atlantic!

Visiting with cousins this summer in Manchester, England, we discussed one of the genealogical mysteries in Dad's family. How, exactly, was my paternal grandfather, Isaac Burk (1882-1943), related to the cousins' maternal grandparents, Isaac Chazan and Hinda Mitav? We have lots of evidence that there is a definite family link...but we don't know the exact person connecting our branches of the family tree. Yet.

By the time blogiversary #9 rolls around, we may have a better idea.

Thank you, dear cousins, for sharing what you know to work on our family trees together! This means you, cousins from my side of the family (Weiss, Schwartz, Roth, Markell, Mahler, Kunstler, Farkas, Chazan, and Burk) and cousins from hubby's side (Wood, Steiner, Shank, McKibbin, McClure, Larimer, and Bentley).

And thank you, dear readers, for being part of this genealogical journey.
Posted by Marian B. Wood 17 comments: 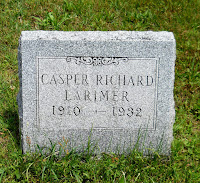 With many people out of work during the Depression, hubby's 2d cousin 2x Casper Richard Larimer was probably lucky to have a job at all.

Early on the cold morning of January 4, 1932, he was driving a truck near Michigan City, Indiana--roughly 80 miles from his home in Millersburg, Indiana--when he pulled over to the side of the road.

It was about 1 a.m. and Casper left the truck's motor running for heat while he grabbed a quick nap. 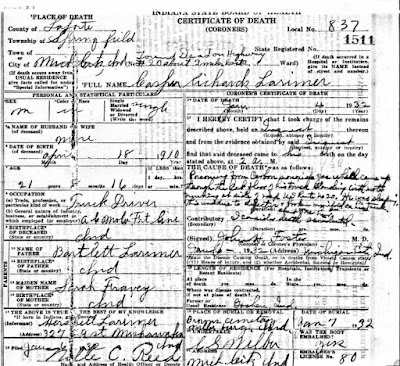 Sometime later, a passerby noticed the truck and peeked inside the cab. Casper looked asleep, but he had actually passed away.

After an inquest, the coroner determined the cause of death as [quote]:

"Poisoning from carbon monoxide gas which came up through the cab floor of his truck standing with motor running at side of road US Route north 20. He was sleeping. This was due to defective and broken manifold on his truck, about one hour. I consider his death accidental." 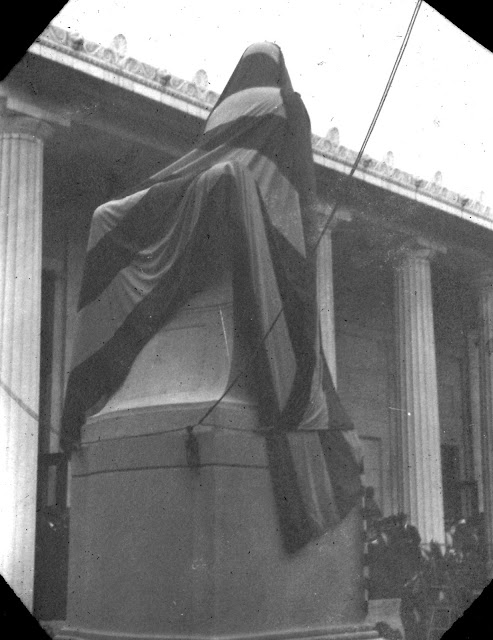 When my late dad-in-law Edgar James Wood got his first camera in 1917, the young teen took photos during his family's car trip from Cleveland to Chicago to visit relatives. In that photo album is this mystery statue, seemingly ready for unveiling during the summer of 1917.

I followed the smart advice on yesterday's Tripping Over My Roots post by Anna Matthews and tried a wordless Google image search using this photo. Nothing. Then I tried adding "1917" but still nothing. Then I tried other search terms, but alas, no matches. So this statue photo remains a mystery on almost Wordless Wednesday.
Posted by Marian B. Wood 6 comments: 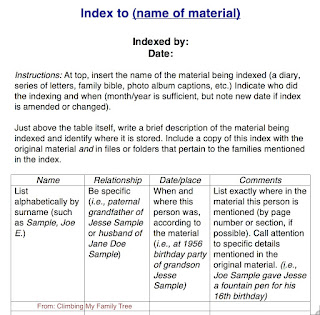 Before I become an ancestor, I want to have all my genealogy materials organized and analyzed, ready to pass to the next generation.

Getting organized means figuring out exactly what I have, who's mentioned in which materials, and the significance of those mentions. With Thomas MacEntee's Genealogy Do-Over in mind, I've been inventorying, indexing, and analyzing diaries, letters, and other materials for my side and my husband's side of the family.

Now I've added a "tab" at the top of this blog to show the various sample templates I've been using. (Please feel free to borrow my templates and adapt them to your own needs!)

Not only do these templates help me keep track of what I have and remember where everything is, they also summarize what I've learned. My goal is to help keep the family's past alive for future generations--so my genealogy heirs won't have to reinvent the wheel. 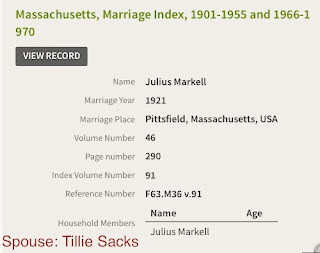 My Markell quest began more than 3 years ago, when I was researching the family of great-uncle Joseph Markell (1894-1975). He married Mary Mahler (1896-1979), my father's aunt and one of the two matchmaker aunts responsible for introducing my father to my mother. No wonder I'm so interested in the Markell family!

Two Markell men married two Lebowitz sisters. One of those Markell men was Joseph Markell's father, Barna Barnhart "Barney" Markell. But was the other, Julius Markell, a sibling or a cousin? My research strongly suggests that Julius and Barna were the sons of Alchanan Abraham Hyman Markell, of Vilna, Lithuania (usually called "Russia" on documents of the period).

Julius came to America before 1907, when I found him in the city directory of San Francisco, working as a plasterer. In 1908, he married Ella Lebowitz (1884-1965) in Washington state, and they had a daughter, Ruth, before the couple moved back east. Some time around 1920, they separated and divorced (I'm still searching for that record).

Julius then married Tillie and they had one child, William Markell (1923-2009). Until now, I couldn't locate a marriage record for Tillie and Julius, or proof that William was their son. 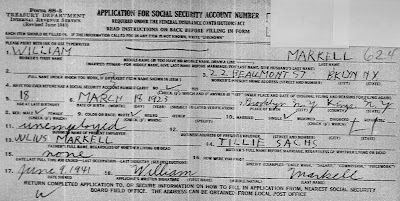 Today, after a lengthy wait for William's original Social Security application document (I had to appeal the original "redacted version" due to the 120 year rule), I received the document (at left) showing his parents' names as Julius Markell and Tillie Sachs [sic]!

With that maiden name in mind, I returned to the hunt for Julius and Tillie's marriage record--and found it in an index of Massachusetts marriages, as shown above. To double-check, I searched the index for "Tillie Sachs" and found Tillie Sacks in the same volume and the same page. Now I've proven that Julius and Tillie are William's parents, and another piece of the Markell puzzle is in place. 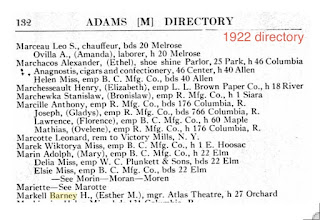 Julius and his brother Barney aren't direct ancestors of mine. Barney is actually the father-in-law of my great-aunt Mary Mahler. But I love solving genealogy mysteries, I have Markell cousins, and the Markell family has an interesting background (early owners of a theater in Massachusetts, for example--see directory excerpt from Adams, MA, at right).

Knowing about the theater, I can imagine that's one reason why Julius and Tillie were married in Pittsfield (in the same county as the theater).  How this couple got to Brooklyn, where their son William was born and raised, I don't know--yet.

UPDATE: I called Pittsfield's City Clerk and learned that Julius and Tillie were married on May 31, 1921. I'm arranging to get their marriage license info and will write up what I learn!
Posted by Marian B. Wood 6 comments: