Thanksgivings Past...lots to be thankful for 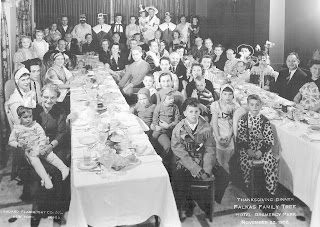 Way back in 1956, the Farkas Family Tree met for a combination masquerade party and Thanksgiving dinner at the Gramercy Park Hotel in Manhattan. My maternal grandparents, Hermina Farkas Schwartz and Theodore Schwartz, were there, along with their three children (Daisy Schwartz Burk--that's my Mom--plus her twin Dorothy and their older brother Fred). And of course the rest of the Farkas siblings, in-laws, and grandchildren. Lots of fun! 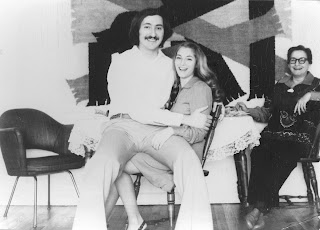 Nearly 20 years later, Sis and her husband hosted Thanksgiving with Mom at their apartment in Riverdale (the ritzy section of the Bronx). The rug you see on the wall--nicknamed "Route 66"--stayed with the family through two more moves and finally bit the dust in the mid-1990s.

Happy Thanksgiving to my extended family, especially my cousins found through genealogy and the cousins I have yet to meet from distant parts of the family trees I'm researching!
Posted by Marian B. Wood 2 comments:

It was the Age of Aquarius, and Sis and her friends decided to start a sorority at Lehman College in the Bronx.

As the first president, she wrote an article for the Parthenon, the "Greek" newspaper at Lehman, to explain how the sorority got its name. Here's an excerpt:


"We took many Greek letters and juggled in an attempt to create a name that was both feminine and Greek. Sigma Omega Sigma (SOS) was a top choice, along with Alpha Nu Delta (AND) and Tau Eta Epsilon (THE).

"The World Book Encyclopedia informs that eta's capital representation is H, so it is sort of legal for us to represent ourselves as THE. At any rate, it invites inquiry, so THE won, although by a small margin.

"It is rather hard to explain our name to people who know the Greek alphabet and object to the "H." We feel that it makes our name unique; we like it. THE is short, catchy, and self-explanatory. It creates a visual image not foreign to non-Greeks.

"We hope that THE becomes a familiar and well-known name at Lehman College: We have paved the way for other organizations to come."

Only six months after THE was organized, it captured first place in the first annual Greek Sing contest. (Think Glee competition with musical skits.) THE's skit was about a "fanciful, satirical" trip around the college campus, with stops at the cafeteria, front lawn, and library. Way to go, Sis!
Posted by Marian B. Wood No comments:

In Sis's basement to look for Christmas stuff, we noticed a nondescript, dusty box sitting on the shelf. Curious, we lifted the lid. Family history gold! 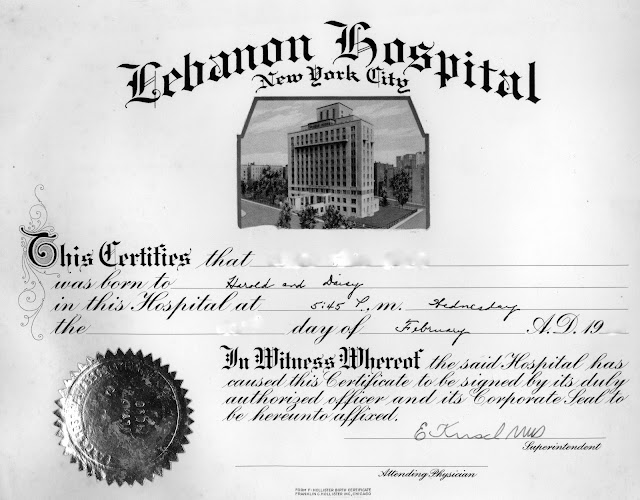 Inside were Sis's elementary school report cards, diplomas from grade school/junior high/high school, her P.S. 103 autograph book (like mine but with her graduation corsage pressed inside!), complete programs from our graduations, and many other childhood artifacts. Also some ephemera like a ticket to her high school graduation, held at the then-elegant Paradise Theater in the Bronx, and a stack of college newspapers featuring the sorority she started at Lehman College (more in a later post). 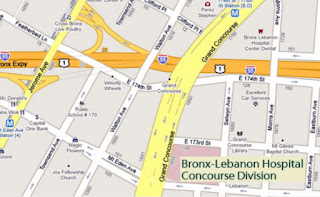 The box held other treasures, including a certificate issued by Lebanon Hospital (now Bronx-Lebanon Hospital Center), where Sis and I were born just before 6 pm, on a cold Wednesday afternoon in February [no dates, please].

The map at right shows that Lebanon Hospital is located on the Grand Concourse, once a ritzy area of the Bronx and a 30-minute cab ride away from where Daisy Schwartz Burk and her husband Harold Burk were living in the Northeast Bronx.

For years, Sis and I would gather around Mom as she worked in the kitchen and ask her to tell "The Hospital Story." She told it something like this: "We had no idea that twins were on the way. After Dad took me to the hospital, he sat in the waiting room, holding a roll of dimes for phone calls to tell the family whether the baby was a boy or a girl. After the first baby [that's me!] was born, the staff was about to give Dad the news when the doctor began delivering the surprise second baby [Sis!], just two minutes later. As soon as Dad found out, he pumped dime after dime into the pay phone calling relatives to tell them about the twins! You girls had to stay in heated cribs at the hospital for a few days until you weighed 5 lbs each; only then you were allowed to go home with us." 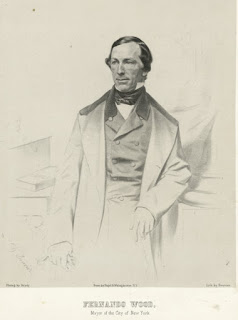 Cousin Larry, the genealogist of our Wood family, spotted a distant ancestor in the new Spielberg movie Lincoln: Fernando Wood. (He's played by Lee Pace, and has a surprisingly juicy part.)

Fernando (left) was mayor of New York in the 1850s/60s and, earlier, served as one of the state's representatives in the US Congress during the 1840s.

Among his bizarre ideas was that New York City should secede from the union (1861), becoming the Free City of Tri-Insula. (Thanks to Keith Muchowski of the Strawfoot Civil War/NYC blog for mentioning the proposed name of the city after secession!) 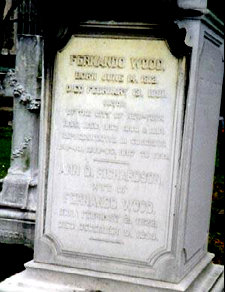 After initially supporting President Lincoln, he became an ardent supporter of the Confederate side and appears in Lincoln in that role. Fernando died in 1881 and is buried in New York City's Trinity Church Cemetery (tombstone above).

As Cousin Larry points out, you can choose your friends but not your family.

A Day to Remember Our Veterans


My family tree and my husband's family tree include a number of vets from WWI and WWII, as well as peacetime service. A few are pictured above. Thank you to our veterans! Never forget.

Sorting Saturday: Ready for the Call from Vital Records?


I've become so accustomed to waiting....waiting....waiting for vital records after I snail-mail a request that I was a bit startled when the good folks in the health department of Elkhart County, Indiana, called me two days after I dropped my request for records into the mailbox.

To back up, I was working my way through the Larimer family history Our Larimer Family, written by John Clarence Work of Lancaster, Ohio in the 1950s, when I saw that hubby's mother had written corrections on the death dates of Brice S. Larimer (1819-1906?) and Lucy E. Bentley Larimer (1826-1900?), her great-grandparents. Ancestry family trees didn't agree on the dates, either.


The Larimers zoomed to the top of my genealogy to-do list when an Ancestry message about a different part of the family tree led me to new info about the Larimers and their burial place in Elkhart County. I called the county and was told to download a form from the website and mail my request, along with a money order.

The genial clerk from Elkhart called me just two days later to clarify a couple of details and tell me that yes, she had both Brice and Lucy's records. And by the way, Lucy's mother's name wasn't the same as I had listed on my request, but the clerk believed that all the other details matched. Oh boy, a new genealogy mystery!

But there's more. I had sent more money than necessary, she said, so would I like any other records from Elkhart, as long as they were filed in 1888 or later?

Ooooops, I hadn't anticipated such responsive service, and I asked to call her back after I shuffled through my files. I quickly compiled a "wish list" of relatives, called, and rattled them off to her. Again she returned my call to finalize the record order. By Tuesday, I should have the copies in hand.

Thank you, Elkhart County, and you can be sure I'll have my family files in order the next time I send you a request!
Posted by Marian B. Wood 2 comments: 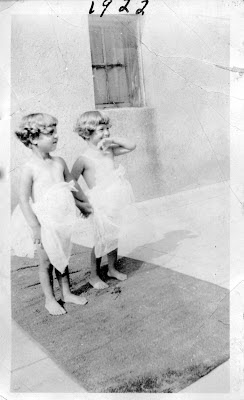 Above is a photo of my mother Daisy Schwartz and her twin sister Dorothy Schwartz, taken when they were almost 3 years old. No notation of who's who...or where it was taken.

And below is a photo of me and my twin sister, taken when we were a year old. Again, no notation of who's who, but by family tradition, it's assumed that the twin with her mouth open must be me :) 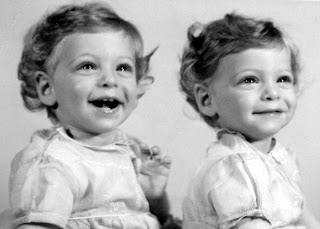 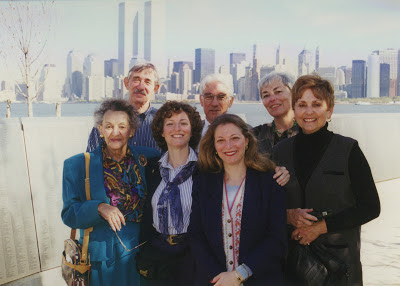 My sister, my hubby, and I joined several cousins for a visit to Ellis Island in October 1996. It was a day to remember!

(You can see the Twin Towers behind us here and at far left in the photo below.) 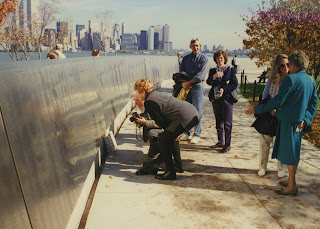 Moritz and Leni's children, born in Hungary where the family originated, arrived in two waves: The first (including my grandma Hermina Farkas) landed at Ellis Island in November 1901; the second landed in April 1903.

After touring the main building of Ellis Island, we cousins walked the grounds and found the names of our ancestors on the immigrants' wall.

Thanks to Cousin Betty, who spent 25+ years researching the Farkas family, we know a lot about this branch of the family tree.
Posted by Marian B. Wood 2 comments:

Hubby's maternal great-grandma was Elizabeth Jane Rinehart Steiner, b. 8 February 1834 and d. 4 November 1905 in Wyandot county, Ohio. I know from Find-A-Grave that she's buried in the Old Mission Cemetery in Upper Sandusky, Ohio, where her husband Edward G. Steiner (1830-1880) and at least two of her children are buried.

Thanks to handwritten notes left by her daughter and granddaughter, I know Elizabeth's death date. Today I had the (rather late) brainstorm to look for her obit on the Ohio Obituary Index and voila! I'll be spending $2.50 to get her obit from the Wyandot Chief newspaper.

The 1900 Census, conducted on 7 June, shows Elizabeth living with her daughter Minnie Halbedel (spelled incorrectly in the Census of course) and son-in-law Edward Halbedel in Crane Township, Wyandot County, OH. This Census says she was born in Ohio in Feb 1834; her pa was from Pennsylvania and her ma from Delaware, still to be confirmed.

On the 107th anniversary of Elizabeth's passing, I'm thinking of her and looking for her ancestors!
Posted by Marian B. Wood No comments: