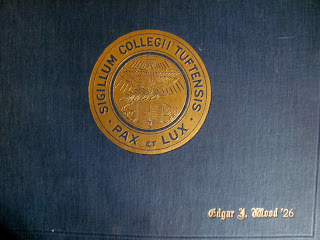 Just a few days ago, a box arrived from my sis-in-law. Inside: The elaborate college scrapbook kept by my late father-in-law, Edgar James Wood, who attended Tufts College in Massachusetts, starting in 1922! Above is a close-up of the cover, showing Tuft's logo and Ed's name and expected graduation year.

I checked with Tufts, as suggested by Bryna in her comment below, and learned that Ed didn't graduate, although he attended classes and was active at the school until at least the middle of May of 1926 (graduation was in June, 1926). His major was economics, another fact the family didn't know.
College must have been the time of his life, because Ed kept all kinds of memorabilia, including dance cards (which I didn't know men even had), menus from banquets, ticket stubs from shows, photos, etc. He was a member of Zeta Psi fraternity, and much of the memorabilia related to his frat brothers, trips, shows, etc.
What a treasure chest: My husband and his sibs don't remember Ed ever showing them this scrapbook. We're all mesmerized by the exuberant life Ed led more than a decade before he married and settled down for good in Cleveland Heights, Ohio. I'll be transcribing the names of Ed's frat brothers (and their home towns) in future posts. 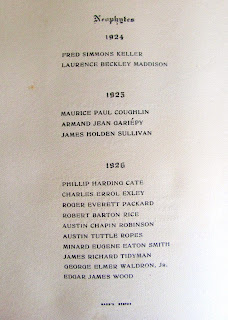 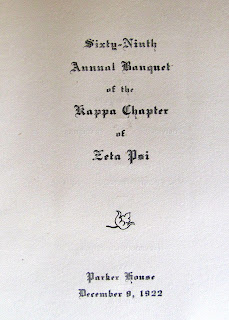 Above are the cover from the frat "annual banquet" Ed attended on December 9, 1922, at Boston's famous Parker House, and the inside page where he is listed as "neophyte" of the 1926 class. More to come!
Posted by Marian B. Wood 2 comments: 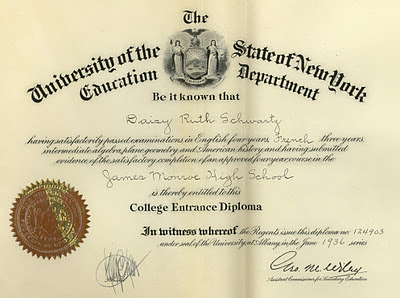 My mother, Daisy Schwartz, graduated from James Monroe High School in the Bronx, NY in January, 1936, at age 16. She didn't get this "college entrance diploma" until June, 1936, because (1) she had to pass statewide exams in certain subjects and (2) the state education department had to certify her coursework.

In those days, an academic diploma was required for college entrance in New York state. To get such a diploma, the high school grad had to have passed exams representing 4 years of English, 3 years of a language (hers was French), and intermediate algebra, plane geometry, and American history. Notice that no science was required, luckily for Mom. She went straight to work to help the household (this was, after all, during the Depression) and so her twin, Dorothy Schwartz, could go to Hunter College in New York. (Her older brother had already graduated college by that time.)

Nearly 35 years later, Mom returned to college to accumulate credits and earn raises, as a school secretary. She enjoyed the literature courses, in particular, but often said she would not go for a degree because she could never pass the science or math courses. Working during the day, going to classes in the evening, and studying at night was no picnic but she did it! And she insisted that every one of her children go to college (which we all did, and then some). 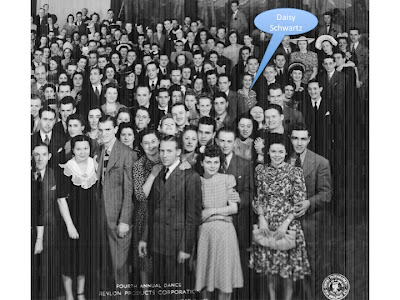 On May 17, 1941, Revlon Products Corp. held its 4th Annual Dance at the Hotel Roosevelt in New York City. Art Paulson & his orchestra entertained.

Here's the mystery: My mother saved this panoramic photo for decades, rolled up in a tube as it was mailed to her from DK Relopf (or D Krelopf), 444 E. 98 St., Brooklyn, NY. I've cropped the photo in half so the faces can be seen a bit better.

Sure enough, Mom (Daisy Schwartz) is in this photo. Like nearly every other lady, she's wearing a flowered dress. She also has on a corsage. Did she come as the date of someone who works at Revlon? (Maybe the light-haired young man on her left side?) Did she work there for a time? She was a typist, stenographer, and secretary during these years. At 22 years old, she had been earning a living for several years while her twin sister Dorothy attended Hunter College.

Reading through the letters written to Mom by her friends during this time period, I have only one possibility for a boyfriend, "Dave." That would fit the first initial of the person who sent Mom this photo (alas, no readable postmark on the mailing tube).

Below, an excerpt from a letter to Mom, dated in August, 1941, about Dave (who seems to have squired Mom around town to some nice places). My guess is that the "Dave" incident was a kiss. It's a mystery!

Was glad to hear from you again and doubly happy to hear about the “Dave” incident. How does it stand now? Do you feel any differently to him now? Evidently he does to you! Hold on to him for the present anyway. The Spanish Gardens and Radio City aren’t to be laughed at, you know.
Posted by Marian B. Wood 2 comments:

A chain of events, starting with a post of a family photo on this blog, led me to my first clues about Captain John Slatter's long and illustrious career with the 48th Highlanders Regiment of Toronto, Canada. I've been in touch with the regiment and with its museum for a few months now. 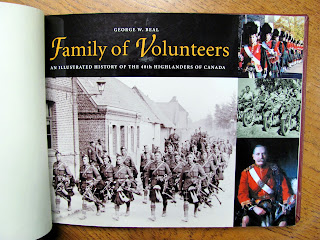 To find out even more, I used WorldCat to locate any printed materials about this famous regiment. On the top of the list was George W. Beal's book (cover above), Family of Volunteers: An Illustrated History of the 48th Highlanders of Canada. And it's available from the Library of Congress, an easy inter-library-loan away from me.

My local library was kind enough to request the book (for a very minimal charge) and it arrived just 5 weeks later, for use only in the library. I read through, and then took out my new portable scanning wand and captured several pages of info about Captain Slatter, including photos and more. Also, I photographed the same pages and the cover.

Here's a shot of the index entry for Capt. Slatter: 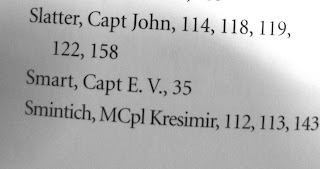 Thanks to WorldCat, I now know more about the history of the 48th Highlanders, and more about my husband's great-uncle Jack, who served as bandmaster for 50 years.

WorldCat is free and you never know what you'll find--like me, you might come across a book or two that will give you new insights about your family tree.
Posted by Marian B. Wood 2 comments:

On the trail of my husband's Slatter ancestors from Marylebone and Oxfordshire, I e-mailed the Slatter genealogist in Oxfordshire to ask whether his family and hubby's family are related. Twelve hours later, this wonderful gentleman wrote back to say no relation...but he did a lookup for me and found more info about John Slatter in Oxfordshire!

John Slatter, college cook, of Oxford (St. Ebbe parish), was married by license to Sarah Harris of same parish on 1 May 1832.

In the 1841 UK Census, John Slatter (Senior) was shown as a cook, living in Banbury parish, Oxfordshire.

By 1859, when John Slatter Jr gets married, John Slatter Sr is listed on the marriage license as "deceased" father of the groom, along with his occupation, which is "cook."

Next steps: Find out more about Sarah Harris and check the records of the Oxfordshire Family History Society, as recommended by the Slatter genealogist.
Posted by Marian B. Wood No comments:

52 Weeks of Abundant Genealogy: Tools--Ancestry (I married him for his ancestors)

For years I've resisted posting my family trees on Ancestry. But toward the end of 2011, I decided to begin posting what I've gathered about hubby's ancestors, because this will make it easier for everyone in the family to see the tree, no matter where they are. And the little waving green leaf is a welcome sign of hints, sometimes valuable and sometimes not. That makes documenting the tree online a little easier, and has pointed me in the direction of new info.

My family comes from Eastern Europe, and of course I've run into brick walls on both sides of the tree. Many records are available only in offices somewhere deep in Hungary, Latvia, or Lithuania...and even then, language can be a challenge.

For example, my grandma Henrietta Mahler is shown at left in the 1930s, at the wedding of her younger daughter, Miriam. Henrietta was born in Eastern Europe, as was her older brother, and their parents. Someday I hope to have more info about where they came from, but details have been elusive up to now.

My husband's family, however, is from England, Ireland, and possibly Scotland, with some stopovers in Canada. Searching for his ancestors is a lot easier than searching for mine--the documents and indexes for his family are almost always in English, and almost always online! Plus I've met several very kind genealogy "angels" who helped along the way, thanks to Ancestry's surname and geographical message boards.

Now you know my secret: I married him for his ancestors. LOL!
Posted by Marian B. Wood 3 comments:

Here we are, starting the new 52 Weeks series by Amy Coffin, and I want to give a new year's shout-out to Amy, Thomas MacEntee, and the many Geneabloggers who have shared their stories, methods, support, and ideas!

I've learned so much from you...been inspired to try new things...discovered resources I didn't know about...and most of all, I've enjoyed being part of this community. Thank you!

Welcome to 2012, the year when I plan to:
No matter what the technology in 2022, 2032, and beyond, there will still be images and names, I'm sure. Whether the Flip videos will survive, who knows?

Happy new year to you all, and happy ancestor hunting!
Posted by Marian B. Wood 3 comments: