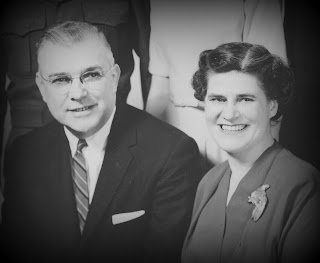 
The trip from Cleveland took about three hours, and Edgar's diary usually mentions lunch and dinner on those days. Later, his notes remarked on newly-opened highways that made the trip faster and easier. Here are a few diary excerpts:

Monday, May 30, 1960: Marian, Brice & I drove to Upper Sandusky to decorate cemetery graves. Very rainy. Had picnic lunch in car in local park. Had fine dinner at Miller's in Lakewood.

Sunday, May 30, 1965: Marian, Brice & I drove to Upper Sandusky where we decorated graves. Had a picnic lunch in the park. Home for dinner.

Tuesday, May 30, 1967: Drove to Upper Sandusky with Marian & Brice to decorate graves, picnic lunch in the park. Drove down by I-71 and US 30 N. Returned the usual way.

Orphans for the Day at Euclid Beach

Early one summer morning when I was about 14, I took my 9-year-old brother for a day of adventure at Euclid Beach, without telling anyone our plans. We'd been to the park many times, but never on our own.

First, my brother and I stopped at the nearest Cleveland Trust branch, where I withdrew some money from my passbook savings account.

After an interminable streetcar ride from Cleveland Heights, we arrived at the park. I bought a few tickets, and we began our rounds of the rides. The Flying Turns (pictured here) was one of the most exciting rides in the park, and we were looking forward to it!

The park seemed full of kids our age, each wearing a tag. Standing in line for a ride, I talked with one of the kids and learned that it was the annual orphans' day picnic. That meant the orphans could ride as often as they wanted for free! The kid generously offered me his tag, and his buddy handed a tag to my brother. I said, "What will you do?" He said they'd just go get replacements.

My brother and I were astounded by the wealth of opportunity that suddenly opened to us. We rode one ride after another, losing track of time. The only money we spent during the rest of the day was for popcorn balls and Euclid Beach taffy. We felt like we had just won the sweepstakes!

Finally, when the orphans had to leave the park, we reluctantly had to find the streetcar and rode home, exhausted but happy. At dinner, my mother (Marian McClure Wood) asked where we'd been all day. We told her we'd been "orphans" for the day and had ridden all the rides at Euclid Beach for free. She was mortified.
Posted by Marian B. Wood 5 comments: 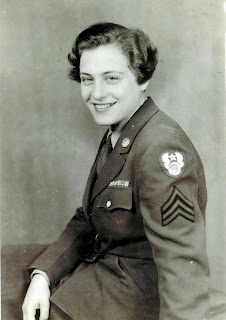 Sgt. Dorothy H. Schwartz, my mother's twin sister, was a  member of the WAC (Women's Army Corps) Detachment of the 9th Air Division (and its historian). She joined the detachment on April 23, 1943 and left it on August 21, 1945.

Auntie Dorothy was one of four stenographers who worked in shifts 24/7 to take notes about changes in aircraft movements and other operational activities vital to the air war. For her support during the period leading up to V-E Day, she received a Bronze Star Medal!

Dorothy was in England for much of her service, following intensive stateside training. So I was very interested in reading the lively, well-written book Citizens of London by Lynne Olson, all about the Americans who "stood with Britain in its darkest, finest hour" (as the cover says). Prominent people like Averell Harriman, Edward R. Murrow, and John Gilbert Winant formed close ties to the people of England before and during WWII, staying in or near London as the war progressed and letting America and the world know about the danger and the courage. Not dull, not dry, and very relevant to folks like me who had family members in the war and in Britain.

Olson conveys a wonderful sense of the ups and downs of daily life in London and beyond: What it was like to live in cities under nightly attack from bombs...how American military personnel swarmed in as D-Day approached and turned rural villages into bustling depots for supplies and training...the feeling of "live for today" because tomorrow was very uncertain...the joy of eating an orange after not seeing one for two years...and finally, the strong and enduring "special relationship" between the British and the Americans, personal as well as political.

My aunt was befriended by a family in the British countryside, an experience very much like what Olson describes happening to U.S. GIs and pilots during 1944-5. I have several letters from the family, who wrote to my grandparents (Hermina Farkas Schwartz and Theodore Schwartz) to rave about my aunt and offer reassurances that she looked well and she was being taken care of. Did my aunt stay in touch after the war? I don't know, but I'm grateful that she had caring people around her while she was so far from home for the very first time, in her mid-20s.

Note: One of the comments below is from the VOGW, a group that is honoring Allied troops from WWII who are buried in Waalwijk and compiling information about the role of women in WWII. Visit their site here.
Posted by Marian B. Wood 5 comments:

Wedding Wednesday: The Sunday Before Thanksgiving, 1946 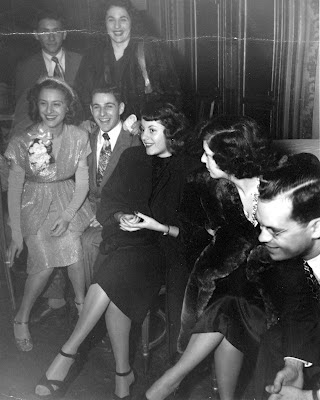 Having been engaged since New Year's Day 1946, my parents were married on the Sunday before Thanksgiving:

Mr. and Mrs. Theodore Schwartz request the honor of your presence at the marriage of their daughter, Daisy Ruth, to Mr. Harold D. Burk on Sunday, the 24th of November, 1946 at 12 noon. Hotel McAlpin, Broadway and 34th Street, New York City.

Above, my mother Daisy (in gold lame dress and matching gold shoes) enjoys a joke along with her new husband's Mahler and Markell cousins and in-laws.

Thank you to Cousin Lois for identifying the woman who's standing above my mother's shoulder as Sylvia Ruth Volk, daughter of Ida Mahler Volk and Louis Volk. The young man whose knee my mom is sitting on is probably Daniel Markell.

My parents visited Ida and Louis in 1946, while still engaged, and brought them a house gift: a big salad bowl and a set of scoopers. Sylvia told her daughter Lois the story of that visit and when Lois attended my niece's wedding last year, she gifted the happy couple with the scoopers.
Posted by Marian B. Wood 1 comment: 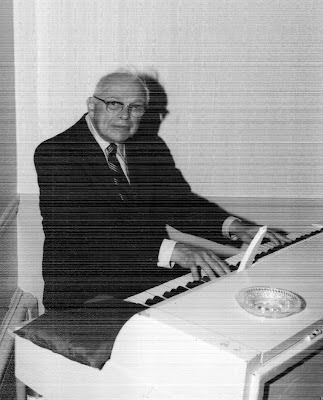 This is a very rare photo of my late father-in-law, Edgar James Wood, playing the piano after retirement. He had played his way across the Atlantic during the summers of his college years in the late 1920s.

For decades afterward, he played professionally at nights and on weekends while continuing his "day job" as an insurance adjustor.

Lucky for me, he played a couple of numbers at my wedding to his son, not too many years after this photo was taken. Blog entry #300 is dedicated to Ed. PS: I just unearthed a 1985 photo of Ed at the piano, below :) 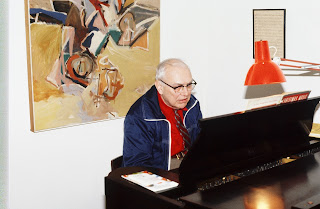 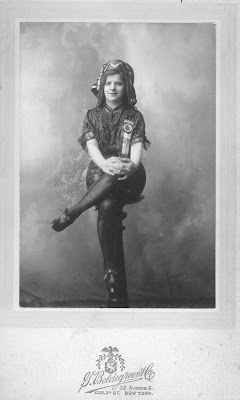 Are these photos of my great-aunt, Dora Lillie Mahler? My mother said that some of them were "Dora, friend of Grandma," also known as "Madcap Dora" because she was what was once called a "stitch." But my mother may not have known that her mother-in-law Henrietta Mahler Burk had a younger sister named Dora, who died in June, 1950.

Above, Dora seems to be in a traditional folk costume of Eastern Europe. Below, she's with a beau (apparently she never married). The bottom photo is probably the oldest--check out that teeny, tiny waist! 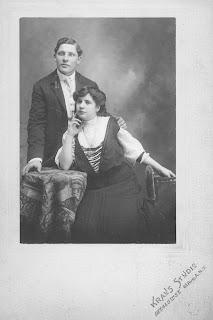 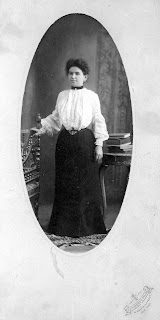 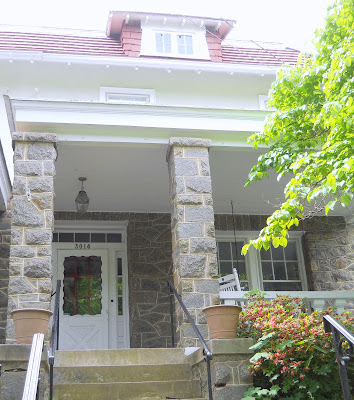 Finally, I've seen the house on Rodman Street NW in Washington, D.C., where my great-aunt Ida Mahler Volk and great-uncle Louis Volk lived in the 1940s. It's been a long journey of genealogical discovery getting here!

Before Y2K (remember that?) I was desperately searching for the death cert of my grandfather, Isaac Burk, not knowing where and when he died. Isaac was married to my grandmother, Henrietta Mahler.

Genealogical records weren't as widely available online then as they are now, and it wasn't easy to find out about Isaac. Eventually, I found a terse obit for Isaac in the New York Times, which indicated when he died but not where. It must have been an especially sad time for the Burks because Isaac and Henrietta's two sons (my father Harold and his brother Sidney) were serving overseas in 1943 when Isaac died, and almost certainly couldn't get home for the funeral.

Eventually, an official in NYC suggested that I check with officials in Washington, D.C. That was the hint I needed. Once I sent for and received Isaac's death cert, there were new mysteries to unravel: Louis Volk was the person who gave information to the authorities when Isaac suffered a fatal heart attack at the house on Rodman Street. Why was Isaac, who lived in the Bronx with his wife Henrietta, visiting Washington in the first place? How was Louis Volk involved with my grandfather?

It took many more years to work out who was who and how we were related. Great-aunt Ida and Grandma Henrietta were sisters. Ida and her husband Louis both served as character witnesses when Grandfather Isaac petitioned for citizenship and was naturalized in 1942. Louis served as a character reference when my father, Harold Burk, son of Henrietta and Isaac, applied to be bonded at the beginning of his career as a travel agent.

Here's where the magic of cousin bait comes in: Ida and Louis's granddaughter, Cousin Lois, found me through this blog in 2010. She has filled in much of the missing info, introduced me to Cousin Lil (daughter of another of the Mahler siblings), and welcomed my branch of the family into her life. Sis and I are delighted that she took us to visit the house on Rodman Street, 69 years after Grandfather Isaac and Grandma Henrietta were there to visit Lois's grandparents, the Volks.
Posted by Marian B. Wood No comments: 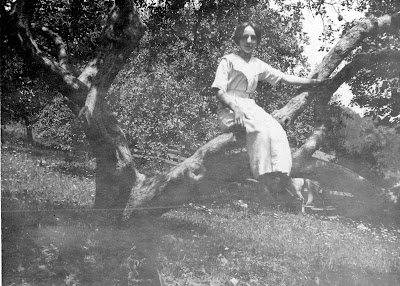 My maternal grandma, Hermina Farkas Schwartz, had this photo in one of her (sparsely-filled) photo books. She had come to New York City in her teens, but tried to escape the heat every summer with a week or two upstate. My guess is that's where this photo was taken, right around the time of her marriage to Theodore (Tivador) Schwartz. See their wedding photo at top right of the blog's masthead!
Posted by Marian B. Wood No comments: