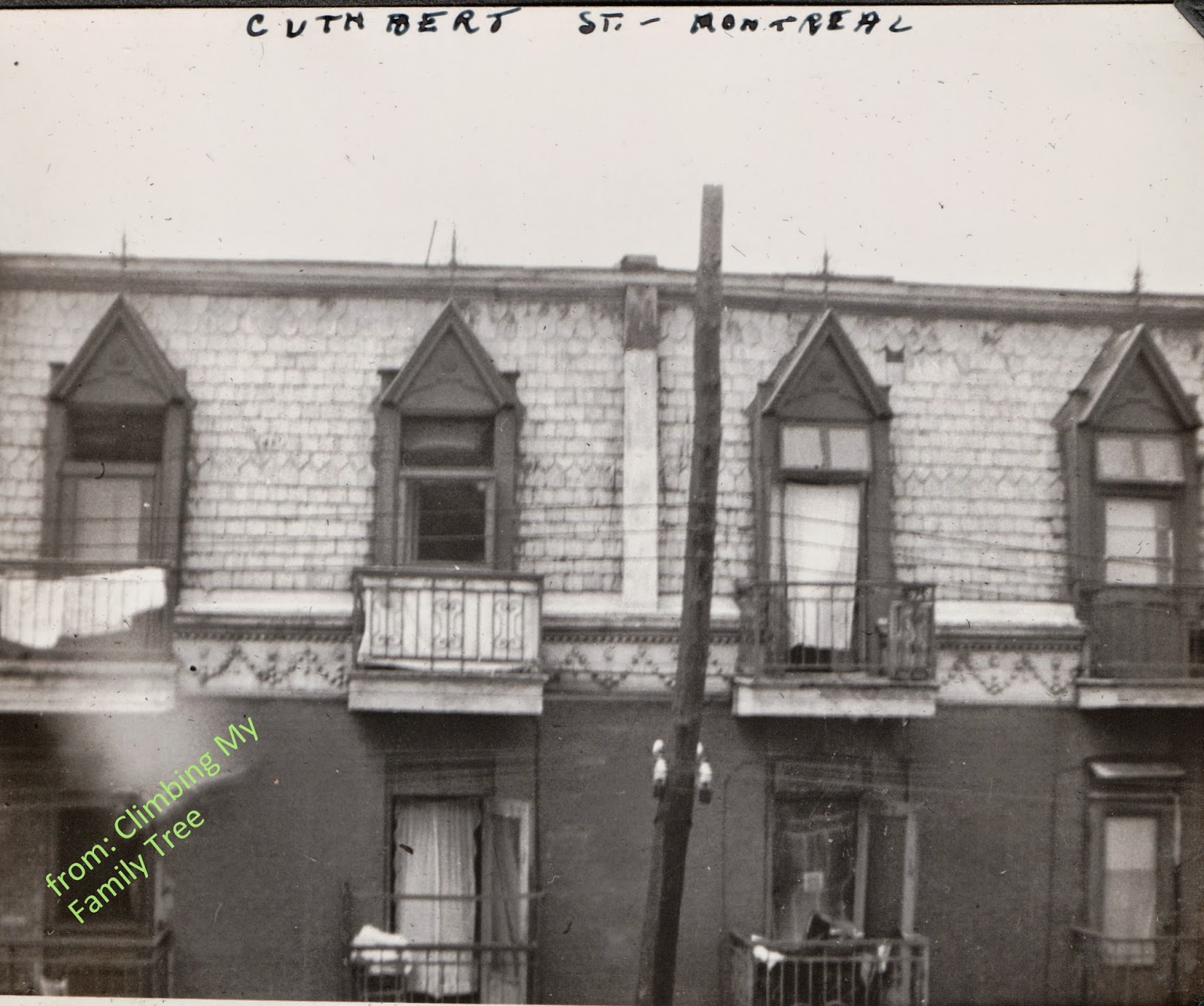 Sometimes the first time I see a document or photo, I don't understand what I'm seeing. But later, with more info or more context, the fog clears and it becomes clear why that photo or letter is important.

This photo is a case in point. I'm organizing, inventorying, and digitizing old family photos as part of week 9 of the do-over process. And I had an aha! moment just today.

This photo is in an album started by my Mom, Daisy Schwartz, after she became engaged to marry my Dad, Harry Burk. In July, 1947, the newly-married couple took a trip to Montreal, returning with more than a dozen black-and-white photos of people and places.

Years ago, when I originally saw this photo in Mom's album, I didn't know the significance of the caption: "Cuthbert St. - Montreal."

But since I learned last year that Dad had an Uncle Abraham, Aunt Anna, and four first cousins in Montreal, photos from this trip took on new meaning.

In researching Aunt Anna, I recently located her 1948 obituary, which mentions that her oldest son lived on Cuthbert Street in Montreal. Aha! That little detail puts the significance of this photo and its caption in a new light.

Thanks to the do-over, I'm finding more connections between people, places, and events that I didn't originally know were connected!
Posted by Marian B. Wood 2 comments:

Happy birthday to us! Love you, Sis!
Posted by Marian B. Wood 1 comment: When Mom & Dad were married at the Hotel McAlpin in New York City, they had a photographer capture the occasion, in state-of-the-art black and white.

But of course they left only one wedding album, and there are multiple descendants who want to enjoy the photos.

As part of the Genealogy Do-Over, I rescanned all the photos in high resolution.

Now I've uploaded and positioned the photos in a wedding-themed Shutterfly book, along with detailed captions. I want future generations to know who's who in the group shots!

Sis had a great idea: she suggested I continue the romance theme with written descriptions like "Once upon a time..." Thanks, Sis! We'll print one book first, check it over, make any tweaks, and order more.
Posted by Marian B. Wood 2 comments: 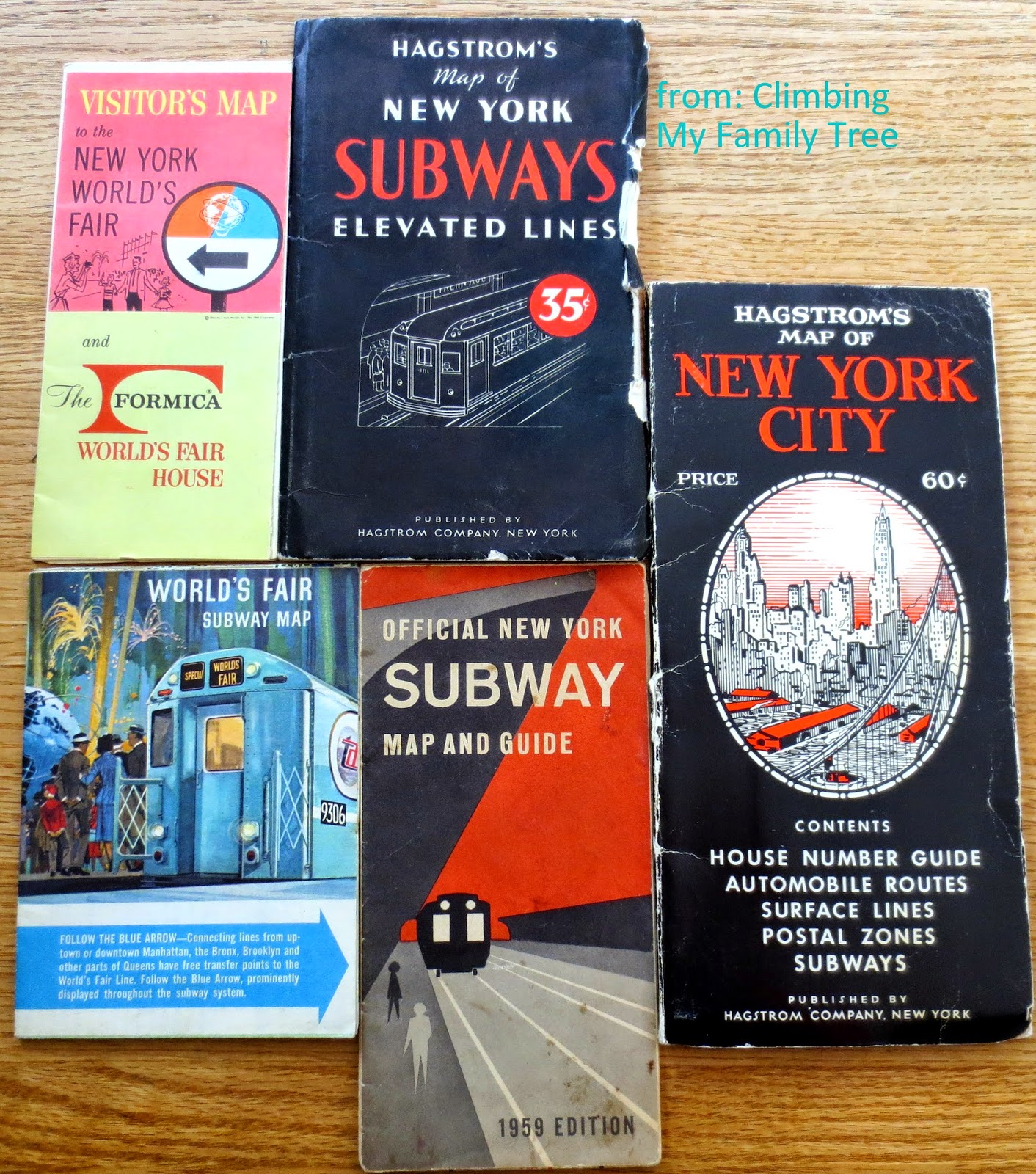 Old maps have dates and memories that add richness and detail to my genealogy research.
In week 7 of the Do-Over, I'm digitizing the maps that have been passed down in my family because they're clues to my ancestors' daily lives and some of the places they lived and visited--places that were meaningful to them and to me.

My grandparents on both sides (Schwartz, Farkas, Mahler, Burk) settled in New York City. They never owned a car but they and their children and grandchildren knew the subway and bus routes very, very well.

My in-laws (Wood, McClure) liked to drive to New York City from their home in Cleveland to visit family, see Broadway shows, etc. My father-in-law also saved state maps that were given away by gas stations, including old maps for Indiana, Ohio, and beyond.

Above, part of the family's collection of New York City transit and street maps. The Hagstrom's maps are the oldest, and the World's Fair maps are the youngest (just 50 years old!). All being photographed and inventoried as part of Week 7 in the Do-Over.


PS: The Do-Over participants explained how to add my blog's name to photographs I post. Thank you! 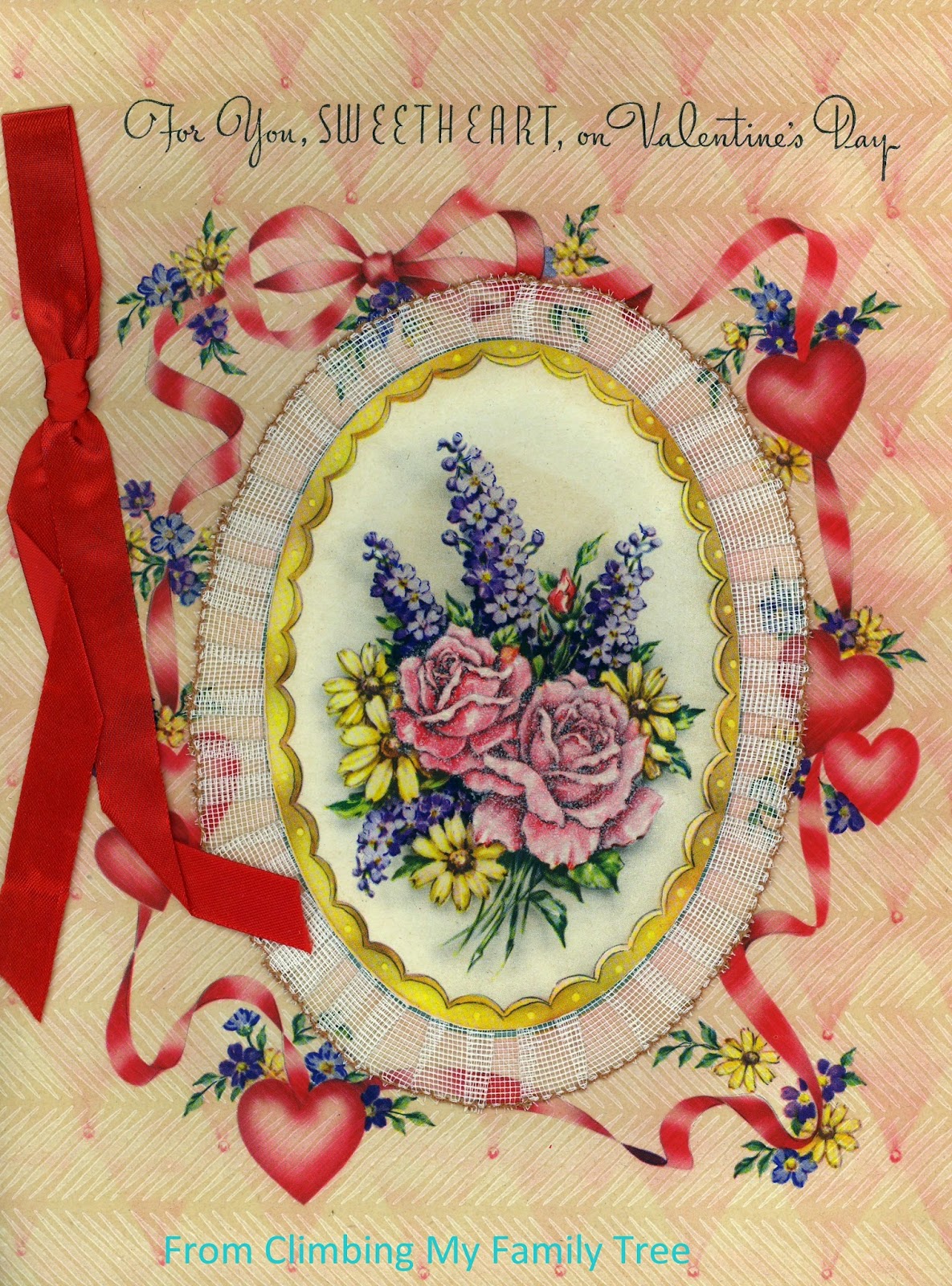 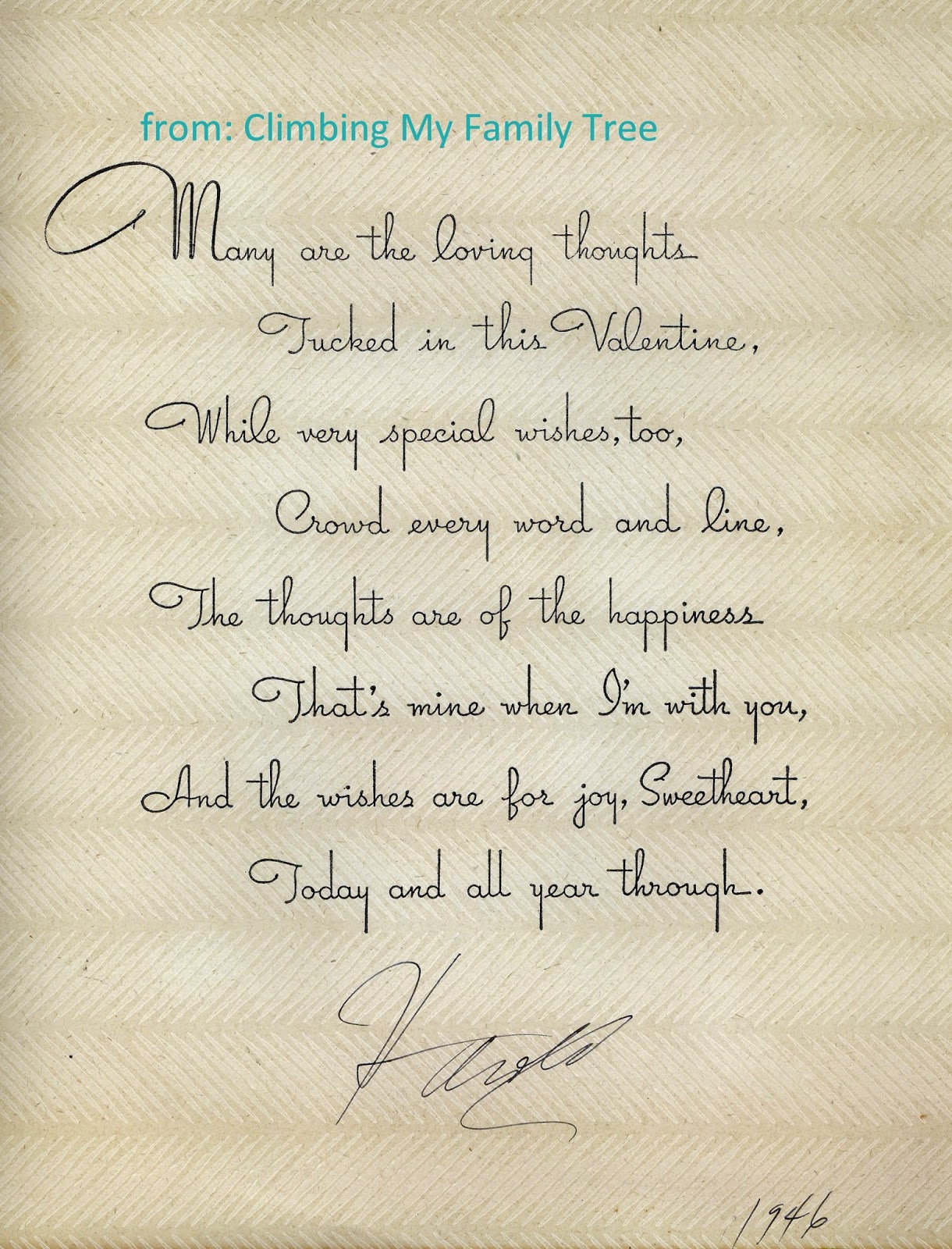 The date was February 14, 1946, just six weeks after they became engaged. (He wrote the year under his signature.) 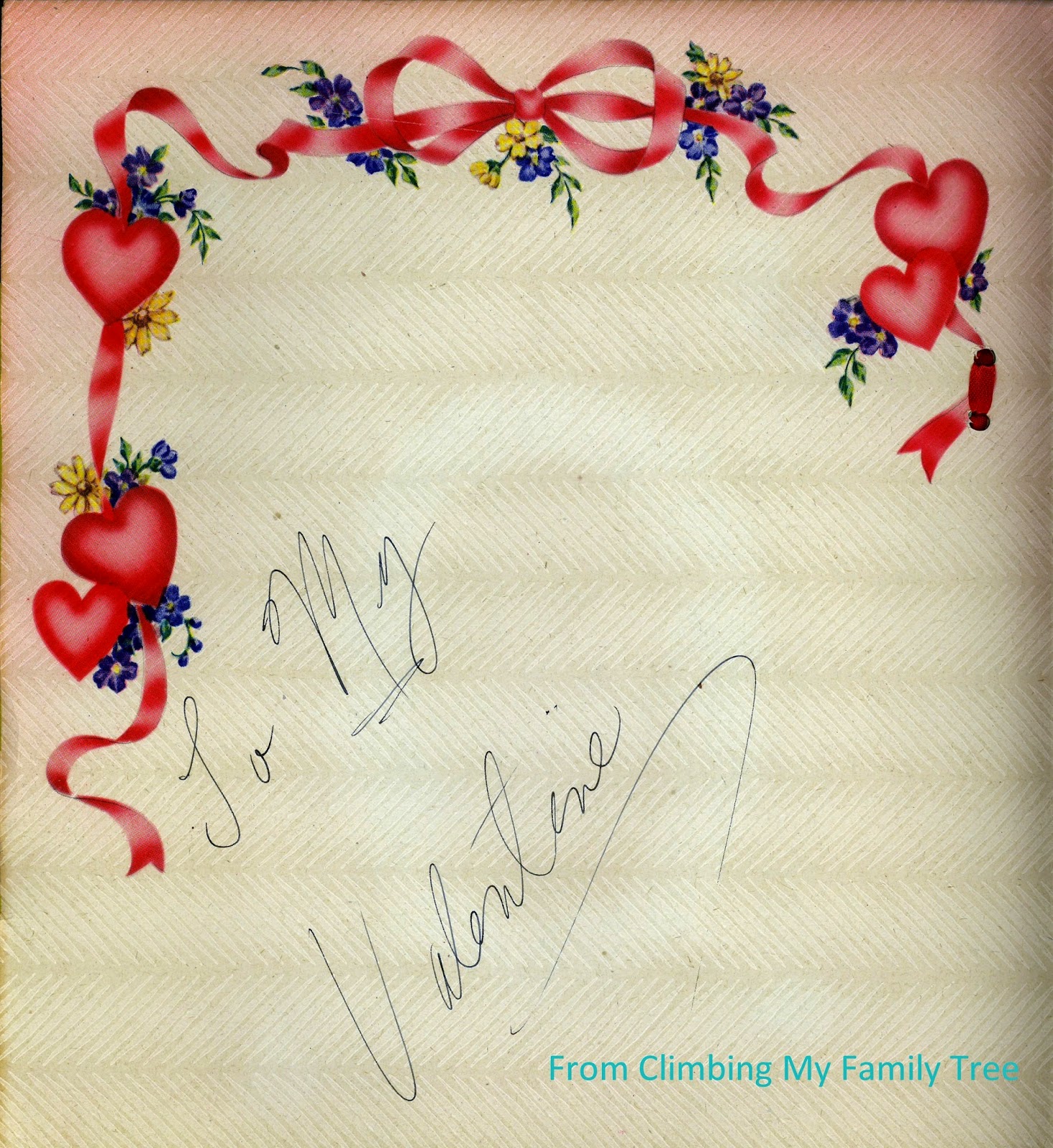 They were married later that year, on Thanksgiving weekend, at New York's Hotel McAlpin, with both sides of their families in attendance. 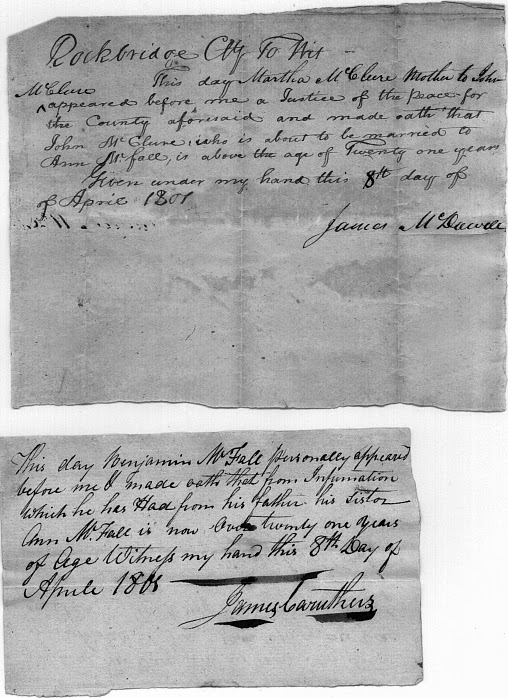 Hubby's immigrant ancestors were all pioneers to be proud of--and thankful for:

Yes, I'm skipping ahead to week 7 of Thomas MacEntee's Genealogy Do-Over series. Why? Because I'm digitizing photos concurrently with my week 1-2-3 activities. I'm from the "touch it once" school of thought--as long as I'm inventorying, I might as well scan photos and documents that aren't already in my database.

The "Burk/Mahler" box I've been inventorying has a number of photos that tantalize me. For instance, this full-length photo, at left, of Nellie Block. She was a sister of my grandpa Isaac Burk (1882?-1943). Nellie and the photo are a bright, shiny object (BSO) I can't let go. When inspiration strikes, I go along for the ride!

The photo is undated but it's from the 1940s, I believe, because Nellie looks much like she did at my parents' wedding in 1946. She's at the door of a private home, possibly a duplex, probably in one of the outer boroughs of New York City.

When Isaac came to New York City in 1904, via Canada, his entry document said (as shown above) he was going "to sister Nellie Block, 1956 3rd Ave., corner 107th St." By the time of the 1905 NY census, however, Nellie was no longer at that apartment building--although Isaac was living there, in the apartment of his future in-laws, Meyer & Tillie Mahler. So far, I haven't found Nellie anywhere in NYC,  nor have I found any historical documents with her name on them.

I know Nellie was alive and well in the 1930s because she received this invitation to a cousin's wedding in 1934.

Most likely Nellie was living not far from her brother Isaac, who was in the Bronx at the time. I'm going to try NYC directories (having already tried the census, marriage/death records, and the other usual official records).

UPDATE: I found Nellie's death notice in the New York Times, revealing that she died on December 24, 1950.  But I'm still chasing more records for her.
Posted by Marian B. Wood 2 comments: