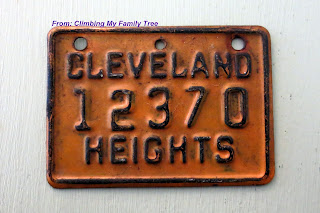 One genealogy artifact from hubby's family is this bicycle license plate from Cleveland Heights, Ohio, circa 1940s. Cleveland Heights still requires bicycles to be registered--but it may waive the $2 fee if an owner brings his or her helmet and pledges to wear it while riding. Back in the day when this license plate was screwed to the back of a Schwinn, and the rider enjoyed the slapping of baseball cards against the wheel spokes, helmets hadn't yet been invented, of course.
Posted by Marian B. Wood 2 comments: 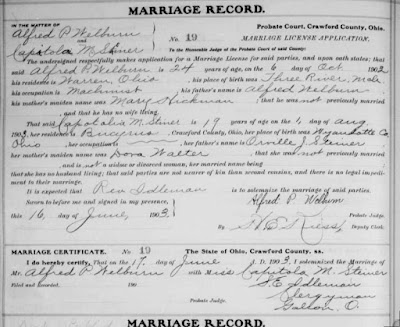 With a first name like Capitola, how hard can it be to research one of hubby's 1st cousins, once removed? Turns out it's not so easy.

Capitola Steiner (1883-1942) was the niece of hubby's grandma, Floyda Steiner. I knew she married Alfred P. Welburn (1878-1953), because the names were in Grandma Floyda's will, along with a Massachusetts address from the 1940s. Using Ancestry and Family Search, I was able to locate their marriage cert (above) and learn the names of their children. Using one of the news databases, I learned that Alfred was Treasurer of the Cadillac Co. of Boston in 1920, when he and some other Cadillac execs were treated to a ride in an "aero-marine flying boat" from Boston harbor to Long Island, NY.

But nowhere (not even on Findagrave) could I find their final resting places or dates. Enter Facebook genealogy!

I'm a member of the Massachusetts Genealogy Network on FB. I posted a note asking for ideas and help locating Capitola and Alfred's place of burial and obits. Within hours, several kind members had told me exactly where the two were buried (Mount Auburn Cemetery in Cambridge) and sent me obits and other details.

Thanks to their research, I was able to enter the names, dates, and plot locations in Findagrave. I also have death notices, plus a 1929 article from the Boston Herald with a photo of Alfred.

Now I know that Alfred, whose occupation was "machinist" in 1903 when he married Capitola, was an automotive pioneer who helped to engineer the first Buick car. He was service manager of the Packard Auto Co. in Boston and then became Treasurer and VP/assistant general manager at Cadillac of Boston. In his 60s, Alfred was foreman of a shift at GE's plant in Everett, MA, during WWII.

And many thanks again to the genealogy enthusiasts on social media who are incredibly generous with their ideas and assistance.
Posted by Marian B. Wood No comments:

One of the ongoing mysteries in the Wood family tree is when/where Mary Slatter Wood (1869-1925), hubby's paternal grandma, arrived in America. In the spirit of the Gen Do-Over, I'm reviewing unsolved mysteries and looking at gaps in my research with fresh eyes.

Since the Slatters were from London (albeit a very poor part of the city), I conducted an Ancestry search of passengers from London to Canada in the 1890s. After all, the three musical Slatter brothers were interested in Canada, and Capt. John Daniel Slatter already lived in Toronto by 1884. Previously, I'd tried to trace the Mary Slatter from London to New York or another US port.

Lo and behold, up popped Ada Slatter (formally Adelaide Mary Ann Slatter, sister of hubby's grandma) aboard the S.S. Labrador, from Liverpool to Quebec/Montreal in the spring of 1895.

Her "calling or occupation" was Lady (which I guess sounds better than "spinster" as I've seen on so many other manifests). [SEE BELOW!] She was going to her father in Cleveland. She paid her own passage, had a ticket to her final destination, and held $2.50 in her purse. A $1 in 1895 was worth approximately $28 in today's money, so she carried the equivalent of $70 when she arrived.

Aunt Ada, as she was known to hubby and his siblings, was born on May 20, 1868. She was the 5th of 6 children of Mary Shehen Slatter and John Slatter. Hubby's grandma Mary Slatter Wood was the baby of the family, born a year after Ada in 1869.

Within a year after Ada joined her father in Cleveland, she met and married John Sills Baker, a fellow Englishman. Their two children (hubby's first cousins, once removed) were Dorothy Louise Baker and Edith Eleanor Baker.

Now will I find Mary Slatter's trans-Atlantic passage during the Gen Do-Over?

PS  On the Canadian passenger manifest (above), Ada Slatter said her profession was "sevt" which must mean . . . "servant." Within a few days, as she crossed the border into Vermont en route to Cleveland, she transformed into a "lady."
Posted by Marian B. Wood 3 comments: 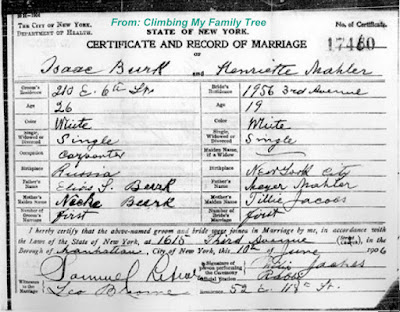 On this day 109 years ago in New York City, Lithuanian immigrant Isaac Burk (1882-1943) married Henrietta Mahler (1881-1954). The document mistakenly says she was born in NYC, when actually she was born in Latvia.

Isaac was a cabinetmaker, and she was the beautiful, dark-haired daughter of a tailor.

Notice how smudgy the names of Isaac's parents are? Isaac was changing his name from Berk (shown on some documents as Birk) to Burk.

The New York City officials certainly had no clue about how to spell Isaac's mom's name. Here, it's shown as "Necke" but elsewhere it's shown as "Nekhe." Her maiden name is probably Mitav, and I believe she's the daughter of Girsh Zvi Hirsch Mitav of Telsiai, Lithuania.

If Girsh Mitav is Nekhe's father, then her sister is Hinda (Ann) Mitav (1865-1940), who married Isaac Chazan (1863-1921) in Telsiai. They moved to Manchester, England in the late 1880s. When Nekhe's sons Isaac and Abraham left Telsiai, they stayed with Hinda and Isaac in Manchester for a couple of years before moving to North America. 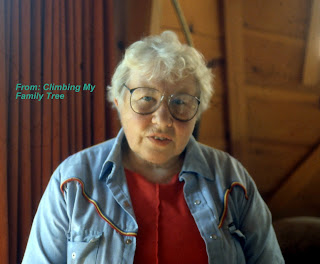 In loving memory of Rosalind Ashby Wood (1922-2015) who married hubby's uncle Ted Wood in 1949. Lindy was the daughter of Dr. Hugh T. Ashby and his wife Margaret Ross Ashby of Manchester, England. She graduated from Liverpool University and the School of Social Work, London. After WWII, she came through Boston on her way to be with a friend in Hollywood. From there, she made her way to Jackson, MI, which became home. 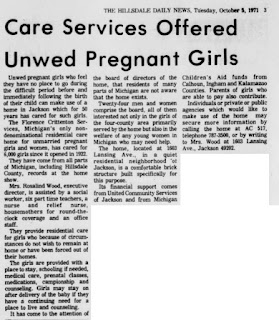 Lindy was the long-time executive director of the Florence Crittendon Home in Jackson, where she helped hundreds of young women over the years. A dog-lover, she also raised and trained therapy dogs to visit nursing homes and hospitals.

She was a sparkling conversationalist, interested in what other people were doing and thinking and saying. Hubby's parents enjoyed cruising the Atlantic and touring England with her on a number of occasions. Lindy was always ready with a kind word and a bit of wisdom. Her upbeat spirit will be missed!
Posted by Marian B. Wood No comments:

Hubby's great-grandma, Mary Amanda Demarest Wood, had quite an interesting life. Born in Manhattan 184 years ago yesterday (on June 1, 1831), Mary somehow managed to get to Plaquemine, Louisiana where -- at age 14 -- she married a New England carpenter Thomas Haskell Wood (1809-1890) who was 22 years her senior.

Remarkable Mary gave birth to 17 children, including a set of fraternal twins who sadly died of diphtheria at age 5. Before the Civil War, Mary, Thomas, and their growing family left Louisiana for a part of Virginia that became part of West Virginia after the war.

By 1870, the Woods had settled in Toledo, where the second half of their family was born. A full list of Mary's children (including hubby's grandpa, James Edgar Wood) is here. She later became a nurse, as well.

Mary outlived her husband by 7 years and 2 days. Her obit, above, shows that she died "aged 65 years, 8 months and 4 days." (His obit is at right.) The funeral was at Calvary Church in Toledo, which no longer exists, and she's buried in the vault of Forest Cemetery in Toledo, Ohio.

Thank you to the Toledo Public Library, which will kindly e-mail obituaries for free on request from this search site.
Posted by Marian B. Wood 2 comments: