In 1851, Edward George Steiner married Elizabeth Jane Rinehart in Crawford, Ohio. He was 21, but she was only 17 and therefore needed her father's consent (see lower left of the marriage cert).

This marriage united two families that I would like to know a LOT more about! Edward and Elizabeth were hubby's great-grandparents. Where country did the Steiners and Rineharts come from originally? Family legend suggests Switzerland, but I don't have anything to support that possibility. And how did these families wind up in Pennsylvania and then in Ohio? My best guess now is the families arrived within a decade before or after the American Revolution. 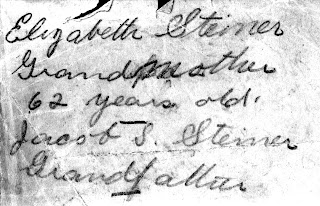 Thanks to hubby's grandfather, Brice Larimer McClure, I have scraps of paper showing the names of one generation back in the Steiner and Rinehart families. On this first scrap, Brice wrote that his grandmother (Edward George Steiner's mother) was Elizabeth Steiner (1802-1864), who died at 62.


The same scrap of paper shows Brice's grandfather as Jacob S. Steiner, no dates, but probably 1802-1860. Can't yet find him in the 1860 Census, can't find his death date or burial place. Nor do I have Jacob's parents' names.

But note that on this scrap are listed two children of Edward George Steiner & Elizabeth Jane Rinehart Steiner: Elveretta Steiner (b. 1854) and son-infant (b. 1852). A wonderful volunteer in Crawford county, OH, found Elveretta buried in Oceola Cemetery #2 (d. 17 Feb 1855) and the baby son in the same cemetery (birth/death dates the same, 23 Oct 1852). All the other children are buried in Old Mission Cemetery, Upper Sandusky, OH. 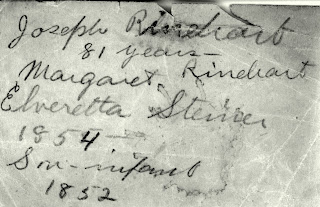 Elizabeth Rinehart's parents were Joseph Rinehart (1806-1888), who Brice notes died at 81. Joseph married Margaret Shank* (1807-1873). The first two children of Edward and Elizabeth Steiner are also mentioned on this scrap, Elveretta (who died young) and a son who died in infancy.

My posts about the Steiners and Rineharts:
* Margaret Shank is still a bit of a mystery. A source in Crawford County believes that the name should be "Shank" but two death certs (Nancy Rinehart Gregg and Hugh Rinehart) clearly show the name as "Shanklin." Seeing no "Shanklin" names in local directories or cemeteries, I agree that "Shank" is quite likely. However, Shankland is another possibility. UPDATE: Because of Rinehart in-law info just come to light in mid-2019, the "Shank" maiden name is much more likely.