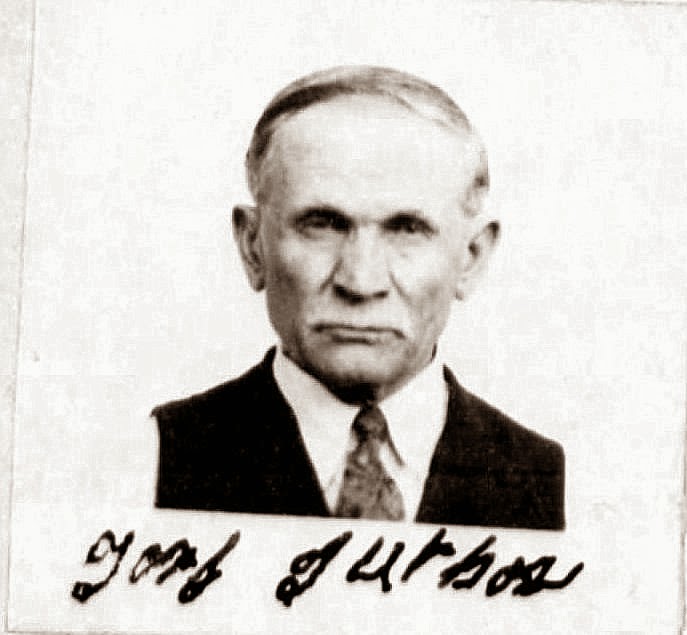 A relative in my hubby's in-law family, Josef Yurko (1873-1954) was born in Hasalin, Czechoslovakia and marred Mary Gavalek (1879-1943) shortly before leaving for America. Their oldest son was born in Czechoslovakia and the other 4 sons and 2 daughters were born in Ohio, where they settled. Josef was a laborer, working in a foundry and later in a housing project. His oldest daughter, Anna C. Yurko (1910-1989), married Peter Pietroniro in 1929.

This photo is from one of Josef's naturalization documents, where he was sometimes called "Josef Yurkov."
Posted by Marian B. Wood No comments: 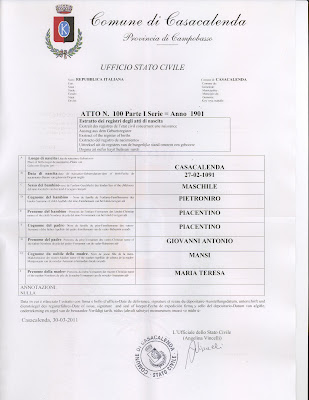 Piacentino (Peter) Pietroniro, my step-children's grandfather, came from Casacalenda, Campobasso, Italy. But that's as far as we could go with his genealogy. Until now, thanks to Susan, a very kind genealogy angel, and the efficient Casacalenda officials.

After attending a talk by Toni McKeen about obtaining genealogical records from Italy, I wrote to the town officials of Casacalenda, requesting Peter's birth record and his family status record, if possible.

Today I received this extract of Peter's birth record. We already knew his birthday was February 27, 1901. What we had to determine was his parents' names. And now I know for sure that he's the son of Giovanni Antonio Pietroniro and Maria Teresa Mansi!

Susan looked up many Casacalenda records for me and found Peter's siblings plus his family four generations back in Italy. She also explained a bit about the area and why young men would leave in the 1920s (to find work). Thank you, Susan! And thank you, Casacalenda officials, for speeding this birth extract to me in only three weeks. Here's a sketch of Casacalenda from its site:

Knowing Peter's parents allowed me to prepare detailed pedigree charts (downloaded for free from Misbach!) and show my step-children much more about their genealogical background on both sides of the family.

Now there are more Pietroniro mysteries to unravel: Peter came over with his brother, Paolo (Paul) Pietroniro. Paul settled in Canada with his wife Filomena and their children. Possibly there are Pietroniro cousins out there?
Posted by Marian B. Wood No comments:

52 Weeks- Disasters? Just the Usual, So Counting My Blessings

This week's challenge is "disasters" and I have to say, my family hasn't had any particularly unusual disasters. Let's leave aside WWII for the moment, of course. The disasters that made a big difference to my parents were more personal than environmental:
Despite these disasters, this week I'm counting my blessings. I have a wonderful extended family (that's getting larger all the time--now that I've met Cousin Lois and Cousin Lil, descended from Meyer and Tillie Mahler, my pat g-grandparents). And I'm counting my blessings that I have a bit of time and energy to trace back my ancestors and those of my extended family.

Right now I'm on the trail of the Pietroniro family from Casacalenda, Italy. Piacentino (Peter) Pietroniro and his brother Paolo (Paul) came from Italy to New York City on the Taormina on July 10, 1923. Paul went to Montreal, Peter went back and forth between Montreal and Cleveland and ultimately settled in Cleveland, marrying Anna Yurko (whose father I mentioned in my last blog entry). More info to come, I hope!
Posted by Marian B. Wood 2 comments: