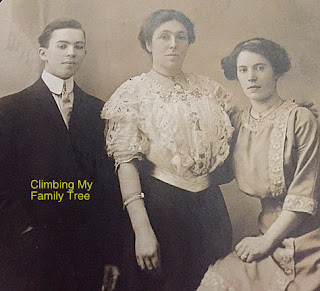 My paternal great aunt Nellie never married, had no children. But lately, I've been thinking about her importance in my family's history. She was the older sister of my grandpa Isaac Burk, born in Gargzdai, Lithuania. Nellie, Isaac, and four other siblings came to North America around the turn of the 20th century. Researching them has taken me 20 years, in part because I began with nothing except Isaac's name--and in part because there were so many different spellings of the family's surname.

Nellie is the lady in lace, shown in the center of the photo at top with one of her brothers, probably Meyer, and her younger sister, Jennie. Below, Nellie's obit has Grandpa Isaac's name incorrect, but it's definitely hers. (I'm still looking for her burial place.)

Why is Nellie's story important to the family history? She seems to have been the first of the Burk siblings to come to North America, before 1900. (I'm still looking for her name on a passenger list.) I don't know how many unmarried young ladies were the first in their families to cross the Atlantic and live in a big US city. (Nellie was a boarder in other Jewish families' apartments, usually, not living on her own.) Why and when did she leave home?

Nellie was already in Manhattan by 1904. Grandpa Isaac listed her as the relative he was coming to see when crossing from Canada to New York. He had left Lithuania and gone to Manchester, England, then sailed to Canada, and finally entered America, saying he was coming to his sister Nellie. Yes, chain migration.

I believe I've found Nellie in the 1900 Census, 1905 NY Census, and 1910 Census. I have her as the addressee of a 1930s wedding invitation sent by a cousin in England. And I see her face in my parents' wedding photos, circa 1946. She was wearing a corsage and standing next to her brother Meyer and her brother Abraham, an honored guest at the marriage of her nephew--my father.

The lesson I draw from my maiden aunt's life is that every person in the family tree has an influence on the family's history. She was present at family gatherings, she touched the lives of parents/siblings/nieces/nephews/cousins, and she influenced the course of family history in ways I may not even know about.

Was Nellie responsible for blazing the trail out of the old country? I don't know for sure, and it seems a bit of a stretch to assume she left first. But I do know she was part of her brother Isaac's decision to cross from Canada to America--and, ultimately, that decision led to his getting married, raising a family, and my parents getting married. I owe this maiden aunt a great debt of gratitude!

Sometimes people say that since they have no descendants, their family history isn't really important to anyone. I disagree. Nellie (and her brother Max and sister Jennie) prove the importance of every story to the family's history. Each person played a role in family dynamics, each story adds texture, detail, and context to the overall family history.

Because Nellie, Max, and Jennie had no descendants, it's up to me as the self-appointed family historian to keep their memories alive. My second cousins have filled in a lot of the blanks. As the months pass, I hope to discover even more clues to their roles in the immediate family and in other related families.
Posted by Marian B. Wood