One of my favorite in-law families is the Markell family. My paternal great-aunt Mary Mahler (1896-1979) married Joseph A. Markell (1895-1975) in 1921. Mary was one of the match-maker aunts who set up the date on which Dad met Mom. No wonder I'm really interested in these in-laws!

Through research, I learned that great-uncle Joe's father, Barney (Benjamin) Markell, and three of his brothers left Vilna, now in Lithuania, to come to America before 1905.

Philip L. Markell (1880-1955), the eldest brother, followed a non-linear career path from newly-arrived immigrant to achieve solid economic status fairly quickly. What I particularly appreciate is that he was able to adapt to the times, over and over throughout his life.

Philip Arrives, Enlists, Is Sent to the Philippines and Back

Philip Markell landed in Boston on December 20, 1894, part of a wave of Eastern European Jews fleeing to America. He was nearly 15 years old.

At age 19, he enlisted in the U.S. Army for a three-year period of service beginning in January, 1899. The enlistment shows his occupation as "florist."

Having served his three years in the army, he was discharged "at sea on Kilpatrick" in January, 1902. Above, an early photo of the U.S. Army Transport Kilpatrick, which entered service in 1875 and was retired in 1914, a dozen years after Philip sailed back from his Army service.

When Philip filled out his WWI draft registration card in 1918, he and his wife Etta were living in Dorchester, just outside Boston, and he said his occupation was "manager in a baking plant." 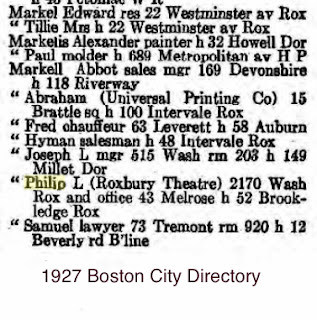 By 1920, Philip was telling the U.S. Census that he was a "commercial traveler" (meaning salesman).

By 1923, however, Philip had switched careers. He was manager of the Roxbury Theatre in Roxbury, MA, where he remained well into the 1930s.

In the 1930 Census, his occupation was "manager, moving pictures," referring to his position at the Roxbury Theatre. But possibly there was more!

From Theaters to Sales

According to a news story, Philip and his brother Barney Markell were partners in owning the Atlas Theater in Adams, MA, a large opera house that very likely showed movies at that point. The Markell brothers sold it in 1935. (The theater burned down in 1937, by the way.)

A 1931 news story showed a Philip Markell as part of a group incorporating the Franklin Theater corporation in Springfield, MA. There was a Franklin Theatre operating there in the late 1930s, but I didn't find any documentation that Philip was actively involved at any point.

By 1933 and for years after that, Philip was again listed as a "salesman" in the Boston city directory. On his WWII draft registration card in 1942, he was listed as a salesman, age 60.

Moving pictures were quite the thing in the 1920s and 1930s, and Philip was in the right place at the right time. Although I don't know why he left the business, I do know he was quite adept at adjusting his careers to the changing times--from florist to soldier to salesman to merchant to manager to moving pictures to salesman.

This is the prompt for week 8 of Amy Johnson Crow's #52Ancestors series for 2020.
Posted by Marian B. Wood