Not Naughty, But Not Necessarily Nice 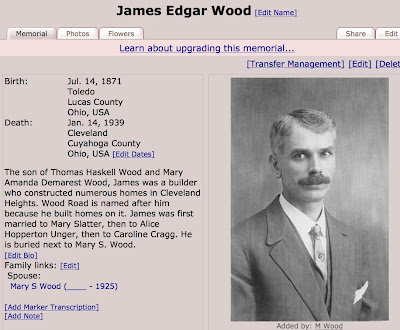 My late father-in-law insinuated, during a family-history interview in the 1980s, that his father was doing something a bit naughty later in life.

Above, the man in question, James Edgar Wood (1871-1939). This was my husband's paternal grandfather, a carpenter and builder active in Cleveland Heights at the turn of the 20th century. His oldest son was my father-in-law, and the interview with him inspired me to hunt for more info decades later.

After the death of James's first wife, Mary Slatter Wood (1869-1925), James still had two teenaged sons at home. So 15 months after Mary's death, 55-year-old James married 35-year-old divorcee Alice Hopperton Unger (1880-1934). Alice listed her occupation as "none" while James's occupation was listed as "builder" on the marriage cert.

Sixty years after this marriage took place, my late father-in-law suggested that James married his housekeeper and there was some hanky-panky involved. The age difference may have been a factor in assessing this relationship. No mention of James's third marriage, by the way.

Well, this was not the whole story. Looking at the documents only, which is all I have, James may very well have married his housekeeper, if that's what Alice was in 1926. But he and Alice divorced some time in the next two years. I'm still trying to get that divorce record from Ohio. It's very likely the key to this family mystery.

In 1928, James married Carolina Foltz Cragg (1871-?), a match arranged by his nephew, Charles Francis Elton Wood. Why? Because Carolina was Charles's widowed mother-in-law and James was in need of a wife to run his household, is the way I heard the story from a Wood cousin in the know. No hanky-panky here, the family was in favor of this marriage so that neither of the older folks would be alone. 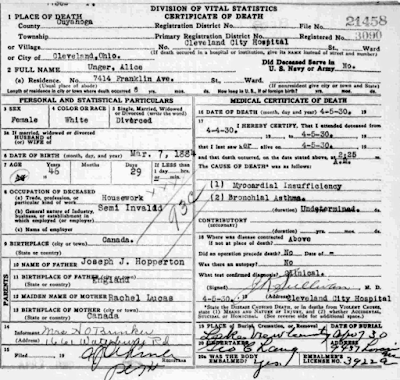 Why do I say that James wasn't necessarily nice? I took a closer look at the death of Alice, the second wife for a brief time. She was a "semi-invalid" at the time of her death in April, 1930. Her medical problems included a serious heart ailment and bronchial asthma. Poor Alice died less than a month after her 46th birthday.

Is it possible that James divorced Alice because her health prevented her from being a good housekeeper and step-mother to the two sons who remained at home? That would not have been nice, although I'm trying not to prejudge.*

*UPDATE: County Clerk responded and emailed me a poor quality divorce document, saying she would snail-mail a better copy. No charge! And guess what: I was correct--James sued Alice for divorce for (1) being unable to care for him and his two minor children from a previous marriage and (2) not speaking to him for long periods, among other reasons that are not clear on the copy of the copy. But the printed copy coming by mail will be more legible. Now, 90-odd years after the divorce, we will know what both sides said in court.

Thanks to Amy Johnson Crow for this week's #52Ancestors prompt, "naughty."
Posted by Marian B. Wood