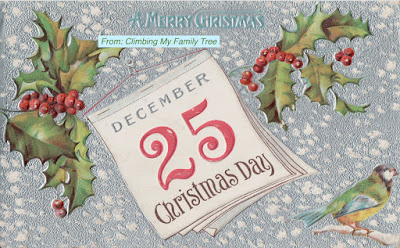 December is a busy month in my family tree and that of my husband. Weddings! Birthdays! Holiday cheer! 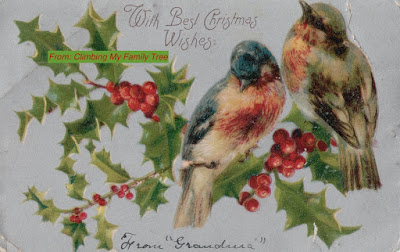 Here are two of many penny post cards sent to my husband's uncle in Cleveland, Wallis W. Wood (1905-1957), from 1905 through 1917. Happily, these and other holiday greeting cards remain in the Wood family all these decades later. 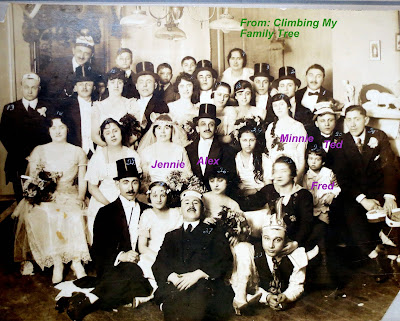 The second-oldest was my grandma Minnie Farkas Schwartz (1886-1964), who is shown in the wedding portrait with her husband Ted Schwartz (1887-1965) and their toddler son, my uncle Fred. 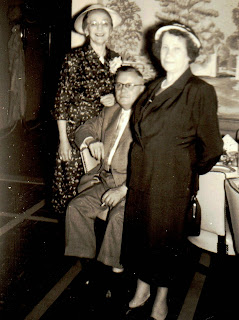 They went to City Hall in Manhattan, got married, and then returned to their separate apartments without saying a word to family and friends. Why? Because Mary's in-laws, the Farkas family, had "picked out" a suitable young man for her to marry, but she chose Edward. Mary's daughter told me this created a bit of a stir at first among the Farkas folks.

But then Mary and Edward were married a second time, just four days later on December 28, in a religious ceremony, with Mary's oldest brother Sam Schwartz signing the marriage license as a witness, representing the Schwartz family. Mary had just turned 22 on December 26.

Mary and Edward were happily married for more than 40 years. Above, my grandma Minnie Farkas Schwartz with her husband Teddy Schwartz and his sister Mary Schwartz Wirtschafter, at a family celebration.

Wishing you all a happy and healthy holiday season!
Posted by Marian B. Wood