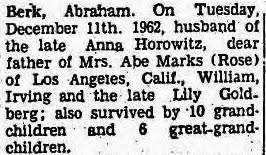 Abraham Berk (abt 1878-1962) came to Canada from Lithuania by way of England. Abraham was the brother of Isaac Burk, my grandpa (abt 1882-1943). Enroute to Canada, Abraham--a cabinetmaker, just like his brother Isaac--stopped in Prestwich, Lancashire, England for a time, married Annie Horwich (1882?-1948) in 1903, and continued his journey to North America in April, 1904--four months before his first child was born. 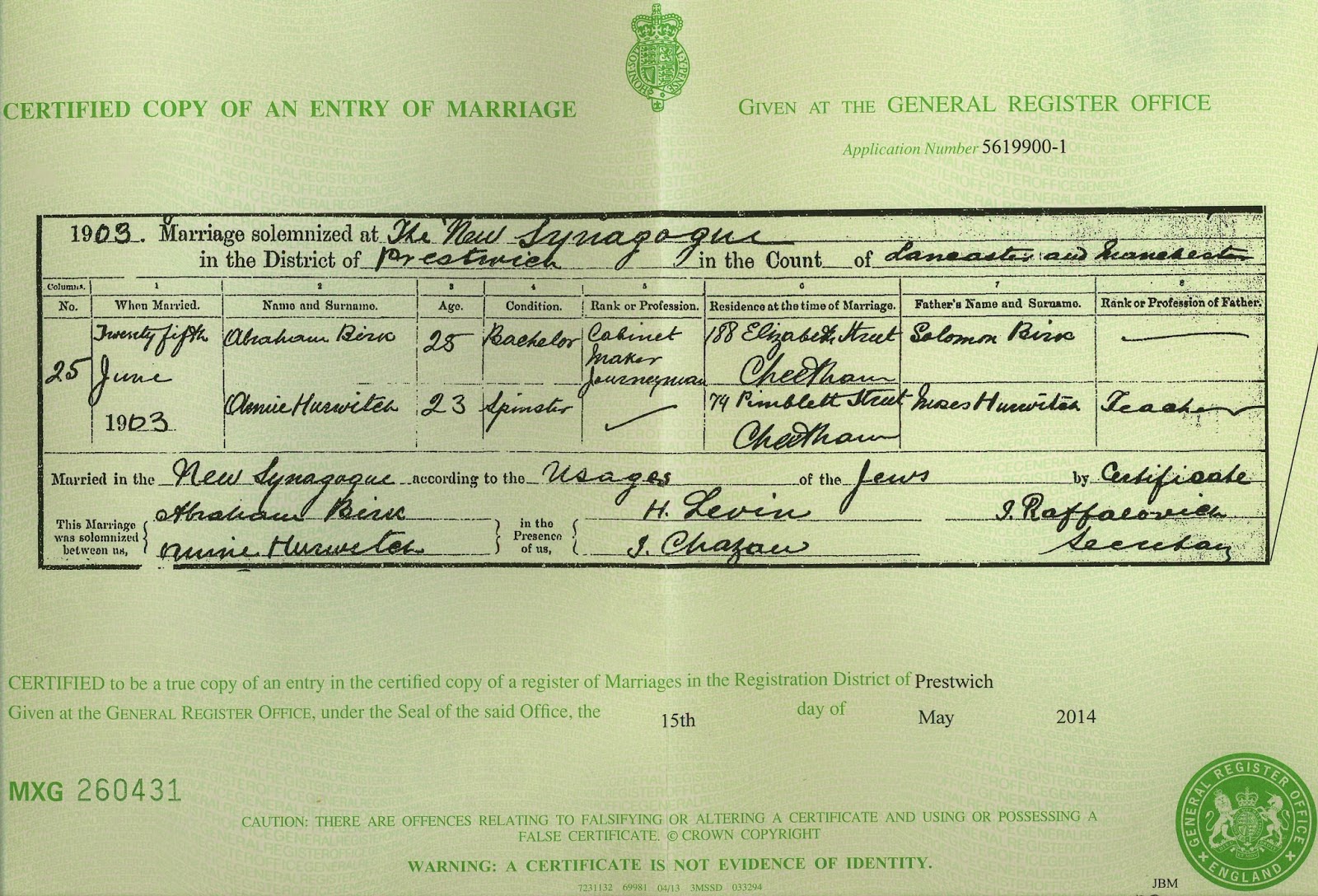 Why did he decide to move to Canada at that time? Why move his wife and infant daughter Rosa away from the Horwich family? And why did Abraham and Annie host her English niece, Minnie Horwich, in their Montreal home for two years, until Minnie married Maurice (Morris) Solomon in 1922?

When they arrived in England en route to North America, Abraham and Isaac Berk lived with an aunt and uncle named Anna Hinde Mitav Chazan and Isaac Chazan near Manchester, England, and that's where Abraham met his future bride. Isaac Chazan was a witness on Abraham's marriage license, shown above.


Children of Abraham Berk & Annie Horwich Berk:
Rose (Rosa) Berk, Lilly Berk, William B. Berk, and Irving (Isidor) Berk
As the obit at top indicates, Abraham survived his wife Annie and had 10 grandchildren and 6 great-grandchildren when he died in 1962. He and a number of other family members are buried at the Baron de Hirsch - De la Savane Cemetery, about five miles away from downtown Montreal.

Minnie Horwich, the British-born daughter of Isaac Horwich and Jennie Barnett, sailed from Liverpool in 1920 to join her aunt Annie and uncle Abraham in Montreal. Her passage was "paid by relatives" and her nearest relative in her home country was Uncle A.H. Hartman in Sheffield, England. Was Minnie orphaned? I think her mother died, and possibly her father remarried. When Minnie married, her aunt and uncle made the announcement and the wedding. I haven't yet traced Minnie and Maurice's family after 1922.

Thanks to a kind Canadian genealogy angel, I have Abraham's naturalization file, including notations about his investigation by the Mounties (probably typical for would-be citizens, but still). The file included details of Abraham's early months in Canada.