How To Donate an Item to a Repository 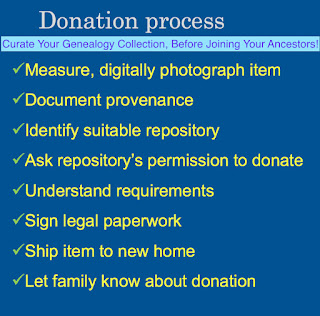 Is there an item in your family-history collection that you might consider donating to a historical society, a museum, an archive, a library, or a genealogical group? 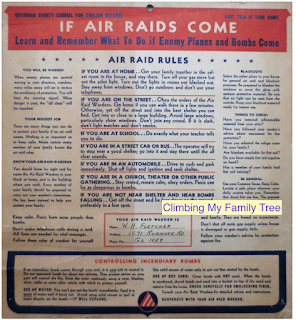 A great example is something not directly related to your family tree, such as this air raid poster that my late father-in-law (Edgar James Wood, 1903-1986) saved following World War II. He kept it with other wartime memorabilia and many decades later, my husband inherited it.

Posters like this were so commonplace that many folks just tossed them at the end of the war, but not Ed.

Describe the Item and Take a Photo

This poster is in very good condition, with a few slight creases but nothing torn or illegible. It even has the name/address/phone number of the local air raid warden in Cleveland Heights, Ohio, which adds to its historical significance.

When my husband and I decided to donate, we approached the Western Reserve Historical Society in Cleveland. Having visited its museum in the past, we had an idea of what the collection contains. The website explains, in detail, exactly what types of donated materials this repository accepts and how the process works.

I emailed one of the curators and described the air raid poster's size, summarized what it says, and described its condition, sending along a digital photo. She replied that it would fit nicely into the current collection. She asked for background on how it came into our family's possession...and ultimately accepted our donation.

After signing legal paperwork that transfers ownership of this item to the society, we carefully packed it flat and mailed it. Our letter included two paragraphs about my father-in-law and mother-in-law and their life in Cleveland Heights during World War II. This info will be in the archives, along with the air raid poster, as a result of our donation.

We alerted our family about the donation and let them know the society would welcome the donation of similar items if we unearth something else in the future. Meanwhile, this air raid poster -- of no personal significance for our family tree but of interest from a historical perspective -- has a fitting new home where it will be safe and ready for scholars and historians in years to come.

NOTE: As Amanda says in her comment below, sometimes an item will not be accepted, because it doesn't fit with the repository's collecting goals, for instance. If that happens, ask the institution to suggest where you might offer the item.

This is only one of the topics I'll cover in my members-only webinar, "Curate Your Genealogy Collection - Before Joining Your Ancestors," for the Virtual Genealogical Association on Tuesday, November 24th, at 8 pm Eastern time. Hope to see you then!