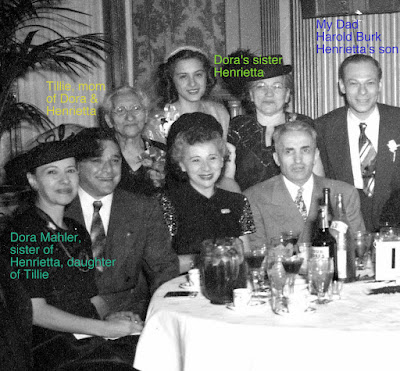 However, one tall and elegant lady wasn't familiar. She appeared in all the photos of my father's Mahler family, but neither I nor the Mahler cousins I knew could identify this lady. Then I was lucky enough to hear from another Mahler second cousin interested in genealogy! He immediately recognized this fashionably-dressed lady as a favorite maiden aunt: Dora Lillie Mahler.

Now I'm trying to pinpoint Dora's birth date. Here are her ages as recorded in each Census:


Where was Dora in 1940? I tried several sources for the 1940 Census, knowing that each site indexes records differently. Tillie was long widowed and Dora was unmarried and had health problems. I'm certain they were sharing an apartment in the Bronx. Well, I haven't yet found the records I expected, but I'll search by location and expect to find them very shortly.**

Meantime, in researching Dora, I did stumble across a surprising discovery: 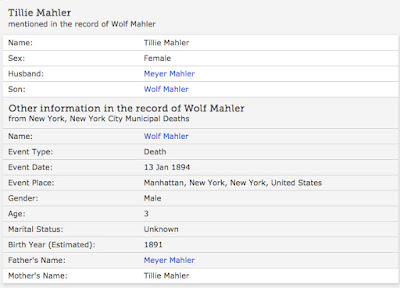 As this transcription shows, great-grandma Tillie and great-grandpa Meyer Elias Mahler seem to have had a son named Wolf who was born in 1891 and died, sadly, at the age of 3 in 1894. I've just sent notes to two cousins, asking whether they ever heard any family stories about this boy who died so young.

I might not have uncovered this clue to a previously unknown Mahler child if not for my research into Dora's background! (Of course I'm going to send for little Wolf's death cert to learn more.) So the lesson learned is: Keep plugging in the names of key ancestors (such as those in the direct line) because new records are posted and indexed every day.

Honoring Dora, here is the death notice that appeared in the New York Times on June 11, 1950 to announce the funeral of this much-loved maiden aunt:

My "Maiden Aunt" post is #14 in the 2018 #52Ancestors challenge by Amy Johnson Crow. Thank you to Amy for a fun and rewarding #Genealogy challenge.

** Unable to find Dora and Tillie in 1940 Census using Ancestry, Family Search, or Heritage Quest's indexes, I used Steve Morse's ED Finder for 1940, which listed 15 Census Enumeration Districts into which the address 1933 Marmion Ave., Bronx, NY would be categorized. Then I clicked through to manually search each page, address by address, until on the 6th ED I tried, I found Tillie and "Dorothy" at their Bronx address (see excerpt above). They were indexed as "Tellie Mehler" and "Dorothy Mehler" in Ancestry. I submitted corrections right away.
Posted by Marian B. Wood