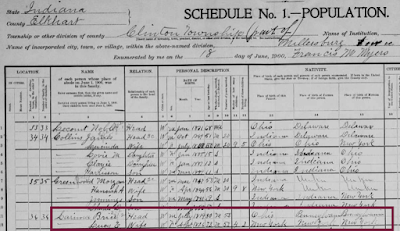 I've been tracing the Bentley family for nearly a decade, with no luck getting further back than patriarch William Tyler Bentley. He and his wife and children were enumerated in Sandy Creek, Oswego county, New York, in the 1830 Census. The family moved to Elkhart county, Indiana, in 1835, according to The History of Elkhart County (p. 1071).

By 1841, however, Olivia had passed away and William Tyler Bentley was raising the children on his own. Later, he left for California as part of the Gold Rush, and he died in Tulare, CA, at the age of 77, not having remarried.

Lucy Bentley, meanwhile, married Brice Larimer in Elkhart in 1847, and they had 4 children together. The last US Census where Lucy appears is in 1900 (see excerpt at top). The enumerator visited the Larimer household in Clinton township, Elkhart, Indiana on the 18th of June.

Just one week later, 73-year-old Lucy took a hard fall and suffered a concussion. She died on the 28th of June in 1900 and is buried in Brown Cemetery, Millersburg, Indiana.

Any Bentley cousins out there?
Posted by Marian B. Wood