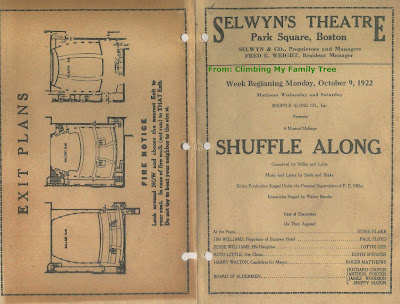 Ninety-four years ago today, Edgar James Wood (my late Dad-in-law) was sitting in Selwyn's Theatre on Park Square in Boston, viewing what he knew to be a theater sensation. 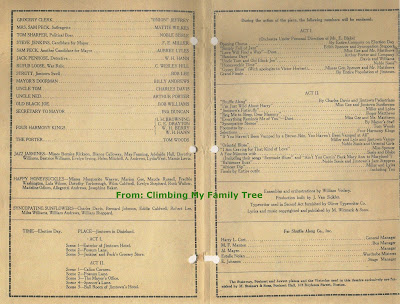 Shuffle Along had opened on Broadway the previous year, a groundbreaking all-black "musical melange" that ran in New York for hundreds of performances. In 1922, the show and its talented performers were touring America and Boston got its turn in October and November.

Ed absolutely loved the theater, and he played piano with a jazz band to pay for his college tuition. In the fall of 1922, having enrolled at Tufts, he bought a ticket for Shuffle Along. Shown here is the program he received for the October 9th performance (he punched the holes to keep the program in a binder as a keepsake).

Ed would have heard lots of buzz about this musical, with Eubie Blake at the piano. The program also shows Josephine Baker as one of the "Happy Honeysuckles" (a big break that helped launch her international career) and Blance Calloway as one of the "Jazz Jasmines" (she was Cab Calloway's older sister and this was her pro debut).

A few weeks later, I hope Ed was tuned in to another "first"--when WNAC broadcast the show live to Boston-area listeners in November. It was the first time a Broadway show was broadcast over the radio with its original cast.

Shuffle Along has recently been in the news after a Broadway revival, prompting this Sentimental Sunday entry about Ed seeing the show when he was a college freshman. Music was always an important part of Ed's life. He played piano professionally, working nights and weekends at weddings and other events during his 30-year career as an insurance adjuster.
Posted by Marian B. Wood