52 Ancestors #35: Did Abbie Eliza Bentley Cross the (State) Line to a Gretna Green? 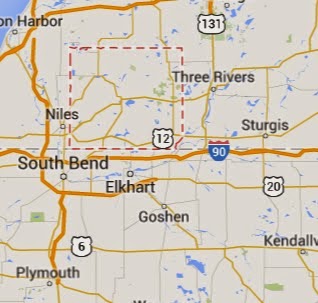 Why was Abbie Bentley married in Cass County, when she lived in Elkhart? Cass County (bounded by the red dashed lines) was just over the state line from Abbie's home in Elkhart, as the map shows.

Abbie's pioneer parents, William Tyler Bentley and Olivia Morgan Bentley, left New York for Elkhart, Indiana in 1835, when Abbie was just 3. In 1838, Olivia died, and in 1848, widower William took off for California to join the land rush.

Perhaps Abbie crossed into Cass County because it was a Gretna Green--a place where marriages could take place without lengthy waiting periods, or because her father was already in California and couldn't give his consent to a marriage in Indiana?

The 1850 Census shows Abbie living in Elkhart, with her blacksmith husband Leonard Curtis and their oldest daughter, Henrietta, very near Abbie's older sister Elizabeth and her carpenter husband, Emanuel Light.

By 1851, Abbie and Elizabeth and other siblings (and their spouses) were loading wagons for the long trek west to join their father in California. Sisters Lucy and Lucinda stayed behind in Elkhart.

Abbie died in 1893 in Santa Cruz, CA, having been married to Leonard Curtis for 45 years.