Was John Shehen a Bricklayer?

I keep saying I married my husband for his ancestors, an endless source of genealogical challenge and fun.

For this week's #52Ancestors ("brick wall" is the theme), I'm looking at my husband's great-great-grandfather, John Shehen (1801-1875?), who lived much of his adult life in a terribly poor section of London.

John Shehen and the UK Census

John and his wife Mary were both born in Ireland, they consistently told the UK Census (see this snippet from the 1841 Census, where the "I" stands for Ireland).

John was also consistent about telling the UK Census that he was a labourer. His wife was either a laundress or milkwoman, but he said he was a labourer. Although he may very well have worked in construction, even worked with bricks, he didn't call himself a bricklayer even once.

I need to investigate whether there are any guilds or unions that John Shehen might have belonged to in the London area. Meanwhile, I'm inclined to think his daughter Mary was exaggerating his status just a bit on the official marriage record. Alas, marriage records didn't ask for the mother's maiden name, so I'm out of luck at this time.

Where in Ireland were John Shehen and wife Mary from? I have no idea, since the UK Census only lists "Ireland" as their birthplace. The spelling of his surname varies from time to time, and I make my own life simple by calling him "Shehen" here and on Ancestry, aware that creative spelling is needed when conducting research.

He's gone from the 1881 Census, and I think I found his death from bronchitis in 1875. The name on that form is Shehan. But not enough details to know for sure.

What about John's wife, Mary? She was actually counted by the UK census twice in 1871. I found her admitted to Northumberland Workhouse due to "chronic rheumatism" in March, and released exactly one month later. Her age was shown as 70. Despite being in the medical ward of the workhouse at the time of the Census on 2 April 1871, she was also shown as living at home.

I don't know when or where Mary Shehen died, unfortunately. I may have found her in the 1881 Census, but I'm not sure whether to hope it's her or not.

A "Mary Sheen" born in Ireland was enumerated in the District Middlesex Lunatic Insane Asylum in 1881. Shown as age 77, this Mary has the occupation of "charwoman."

Also, Ancestry shows a number of people with Mary's given name but varying spellings of the "Shehen" surname as being imprisoned, acquitted, and/or in London court registers for different offenses such as theft, from the 1830s on.

Was this my husband's great-great-grandma? The dates are in between the Census, so I can't know for sure, but my guess is no. Why? Because Mary and John remained in their same lodgings for so many decades, I suspect they had just enough financial stability for Mary to not resort to theft. Or so I hope.
Posted by Marian B. Wood 3 comments:

See You at Family Tree Live in London, April 26-27 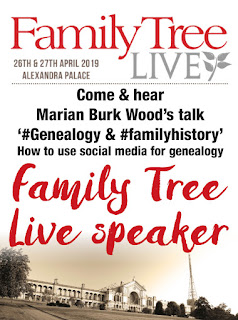 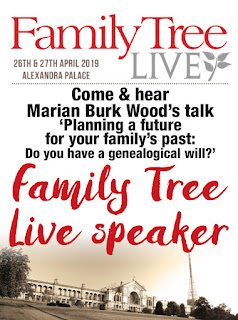 There will be more than 60 lectures, with three choices of expert speakers or panels per each time slot. For hands-on learning, the show also offers dozens of workshops, including a special track about DNA for genealogy.

You can buy tickets and prebook your seat in lectures and workshops right now!

It's new, it's live, and I'm thrilled to be on the program as a speaker and panelist during three sessions. Please say hello if you come to one of these talks:
* You can find out even more by reading my best-selling genealogy book, Planning a Future for Your Family's Past.
Posted by Marian B. Wood 3 comments: 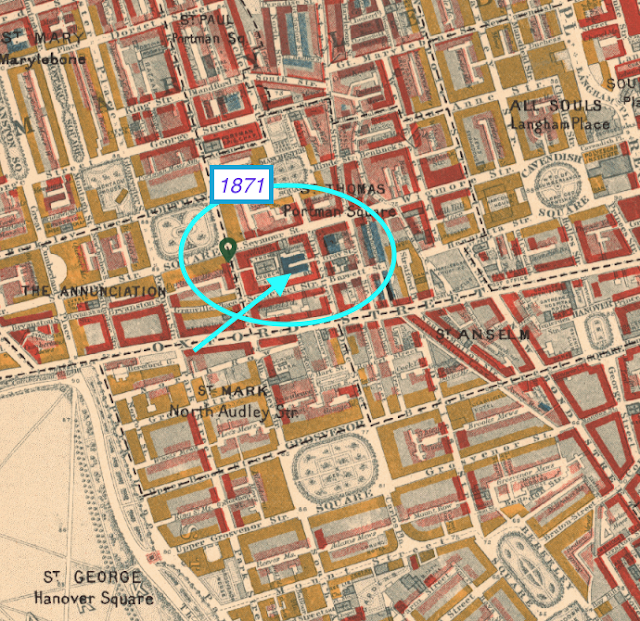 Today I'm using Charles Booth's London maps and notebooks for context about my husband's 2d great-grandparents. I know very little about John & Mary Shehen (or Shehan or Sheen). But Booth's info indicates that they were truly poor.

The 1841-1871 UK Census entries for the Shehens consistently say they were born in Ireland around 1801. He is a "labourer," she is usually a "laundress" or "charing." They never left a quadrangle known as Gray's Buildings, shown above on Booth's maps in the Marylebone section of London. Census entries on the same page with the Shehens in 1871 indicate that a good number of the residents were also Irish-born. Given the devastating Irish Famine, it's not surprising to find so many Irish people in London in that period.

Above, a snippet from Booth's notebook entry about Gray's Buildings, in which he writes there are "a great many Irish" and also notes: "most of the doors open but few broken windows." Based on the poverty he observes, Booth considers the area of Gray's Buildings to be "very poor . . . chronic want."

Poor isn't the end of it. Alas, hubby's great-great-grandma Mary Shehen (whose maiden name I don't yet know), was admitted to the medical wing of the crowded Northumberland Street Workhouse on March 15, 1871, due to"chronic rheumatism." One month later, she was discharged (or, as the record shows, "reliesed").

Two places at once? Mary Shehen was enumerated both in Gray's Buildings and in the Northumberland workhouse for the 1871 Census. Interestingly, that Census was supposed to be as of April 2. But even though Mary Shehen is listed as being in the household with her husband John, the workhouse admission record AND the 1871 Census, below, are evidence that she was actually ailing in the workhouse. Probably it was her husband John or someone else who reported her at her usual residence, unsure of how to tell the Census about her temporary stay in the workhouse.

When I started looking for the Shehen family in Booth's records, I hoped they would not be in as dire economic shape as their daughter Mary's family. Unfortunately, that wasn't the case, as the maps and then the workhouse documents indicate. (Sadly, their daughter Mary Shehen, who married John Slatter in 1859, was in and out of workhouses and then two asylums for years.)
Posted by Marian B. Wood 5 comments:

Sorting through family slides from bygone years, I came across a handful of slides with a two-page description titled "What I did on my fall vacation (1993)" written by my twin and me!

Having entirely forgotten about this write-up (but not the vacation), it was wonderful to stumble across enough verbiage to bring back minute details of this fun time.

Herewith, some excerpts from the twins' whirlwind vacation, made possible by my wonderful hubby, who stayed with my school-age niece while we sisters flew across the pond:

Monday, September 20: Slept late (a habit) and had lunch next door at the L'Ambiance, which had none. Quiche and salad were surprisingly good. Tube to Leicester Square to buy 1/2 price tickets to "Hair." Then on to British Museum where saw the Rosetta Stone. Dinner in Knightsbrige at Pasta Prego (yum) and tube to Old Vic Theatre, where we danced live on the London stage.*
Tuesday, September 21: Up at 9:30 am for an early start to Westminster and to change money. Saw the Imperial War Rooms....then back to Westminster Abbey for a fascinating tour...Full afternoon tea, then off to see "Joseph & the Amazing Technicolor Dreamcoat."**

* Anybody who's ever seen "Hair" has had the opportunity to dance on Broadway or the West End or wherever, since the audience is invited on stage during the finale. Sis and I took advantage in London! (Earlier this year, I chronicled my brush with fame on Broadway in this post.) Too bad that sis and I, New Yorkers, were among the few audience members who understood and laughed at the show's dated song references to such non-events as: "LBJ took the IRT..."

** Joseph became a family favorite after this--we and our kin saw it a couple of times on Broadway and numerous times elsewhere; my theatrical niece played in at least one camp production; and just last December, some of us went to an off-off-off B'way production to keep the tradition alive into the next generation of our family. The young 'uns still sing "Go, go, go Joseph!"
Posted by Marian B. Wood No comments: