Wow, it was a wonderful conference experience yesterday at the New York State Family History Conference, held for the first time in Tarrytown, New York.

Not only did I get to see friends from multiple genealogy clubs and societies around the Northeast, I had the opportunity to learn from some of the best genealogy experts in the business. 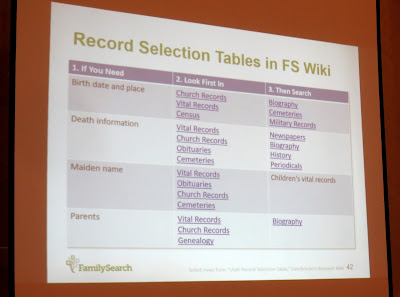 My first session of the day was Cherie Bush's New York Records and Resources at FamilySearch.org.


Cherie demonstrated some of FamilySearch's most valuable features and highlighted several record sets that researchers should check for New York-area ancestors. (One record set that appeared in her list was something I need to investigate: Bronx Probate, 1914-1931.)

She also reminded us of smart ways to use the FamilySearch site, especially the super-valuable wiki. Here is her slide about which record sets to check first when researching birth, death, maiden name, and parents. (Cherie invited the audience to photograph any and all slides. Thank you!) 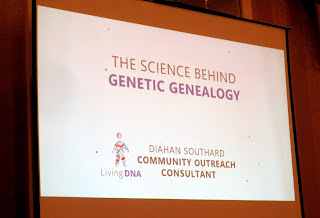 Next, Diahan Southard and David Nicholson presented The Science of Genetic Genealogy. Blaine Bettinger was in the audience, having just finished his session, "Shared Matches and Genetic Networks."

My top takeaway: The software used for matching people is getting much, much more sophisticated. Living DNA is planning to offer matching that will not just show where we are from and who we match, but also how each match relates to us. In essence, the software would automate the match-analysis process that Blaine Bettinger described in his talk. Sounds promising! 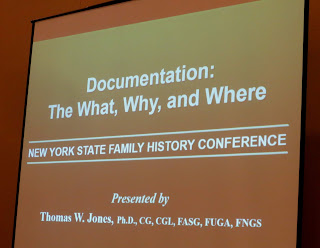 After lunch, I snagged a seat in Thomas Jones's session, Genealogical Documentation: The What, Why, Where, and How. He reviewed, in detail, how to develop citations for sources we use in our genealogy research, saying: "Undocumented genealogy is useless because it can't be checked."

Many of us inherited handwritten family trees with no sources, leading to months or years of research for verification. If we properly cite our sources, those who come after us will be able to retrace our steps and also evaluate the quality of the sources we used. The idea is to allow later researchers to build on our work, rather than having to go back and check it over.

Mid-afternoon, a fun highlight was joining other Virtual Genealogical Association members for a group photo outside the exhibit hall. It was a pleasure to meet them in person--many for the first time! 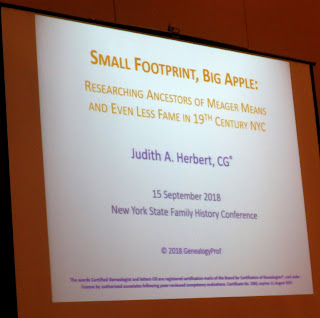 My final session of the day was Judith Herbert's Ancestors of Meager Means and Even Less Fame in 19th Century NYC. She provided an in-depth explanation of why and how to conduct a surname study, with the case study of an ancestor. Very time-consuming, detailed research and analysis technique that can't be used if the name is Smith or Jones (or, as in my husband's case, Wood) because of the unwieldy number of people who would have to be evaluated.

The entire audience laughed when Judith showed a death cert where the spaces for names of father and mother had a dash. Helpful, Judith noted, only if your ancestor's given name was "dash."