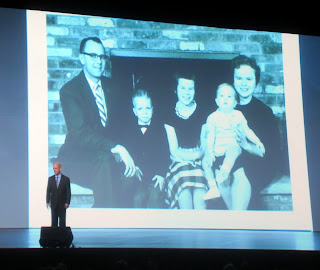 Well, it's a few minutes after my figure skating hero, Scott Hamilton, concluded his emotional talk about family and connections. Here he is with a photo of the parents who adopted him, and a brother and sister. No dry eyes in the audience as he told of his life's journey so far. He received a preview of what genealogical research revealed about his birth parents. Can't wait to learn more later. 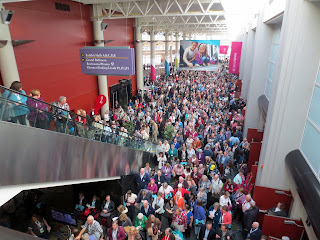 Maybe there were a few empty seats in the ballroom but I didn't see 'em. Above, a small part of the massive crowd streaming out after Scott's inspiring talk. 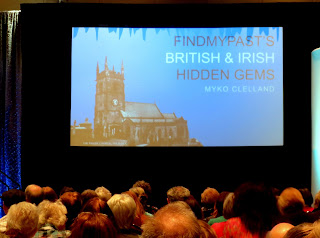 After Scott, my first session was the ever-dapper Myko Clelland, offering tips for finding "Hidden Gems in FindMyPast's British & Irish Collections." Despite a technical glitch with his slides, the talk was practical and informative, of course. He just happened to show a record set that might help me break a brickwall on hubby's Slatter side! Top takeaways: Use the A-Z Catalog to locate records, filter by country, use the unique search screens to find record sets by entering as little as possible and then adding more info (dates, for instance, or address) to narrow. 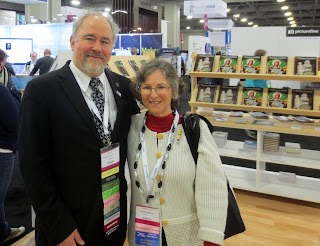 During the break, I caught up with David Allen Lambert, chief genealogist of American Ancestors. 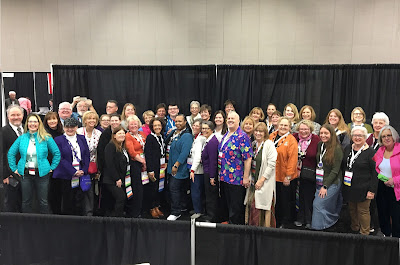 Then the lunchtime Geneabloggers Tribe group photo was a hoot and a fun opportunity to see so many blogging buddies in one place at one time. Above, with permission, is the "composite" photo with a few Geneabloggers magically added via technology. I'm the small sardine in the middle of the front row, a few shoulders away from Thomas MacEntee. 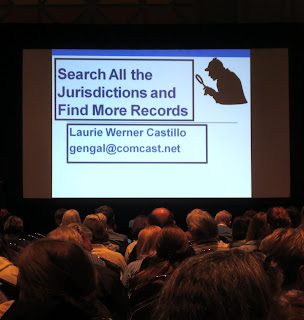 My afternoon sessions began with Laurie Castillo's "Search All the Jurisdictions" presentation. She knows so much about shifting state/county/township jurisdictions and how to figure out where our ancestors lived when they were alive. That's where we need to look for the records. Her advice: Don't assume anything. Do the research and use maps, gazetteers, whatever it takes to figure out what a place was when our ancestors lived there and then look for the repository holding those records. 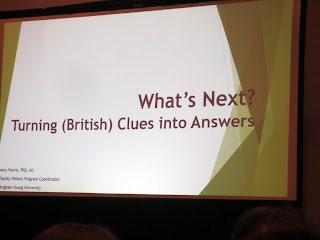 Alas, I was crowded out of Amy Johnson Crow & Curt Witcher's talk, as well as shut out of Shannon Christmas's DNA talk. Happily, I squeezed into "What's Next? Turning British Clues into Answers" taught by the terrific Amy Harris.

This was pure methodology at its best. Her case study for finding Mr. Freak (his name, really!) was a perfect way to see the Genealogical Proof Standard in action. Oh, and in the next few days, BYU will be launching its redesigned site for British genealogy.

Try this URL early next week: Englishancestors.byu.edu. I can't make it a hotlink because it's not yet live. Just copy and paste into your browser for lots of goodies.

PS If you're at #RootsTech, don't forget to click on the clipboard to rate each speaker and session. They really want our feedback! Bye-bye from SLC. It's been quite a memorable week.
Posted by Marian B. Wood