For this week's Sepia Saturday, I began by scanning one of the few postcards I have from Dorothy Louise Baker (1897-1981), to her first cousin, Wallis W. Wood (hubby's great uncle).

The year was 1912, and Dorothy was living with her parents (Adelaide Mary Ann Slatter and James Sills Baker) and her younger sister (Edith Eleanor Baker) in Toledo.

Adelaide Mary Ann Slatter and her four siblings were born in London, and I went to my online tree to do a quick search on her name.

I found something quite shocking. Adelaide and all of her siblings had been admitted to Bromley House--a workhouse--for several nights in May, 1874.

This is the kind of sad place for the poor where, a few lines above the Slatter siblings in this same ledger, a 50-year-old laborer admitted for a few nights was found dead in his bed. Bromley House added to its defenses, according to records, to prevent "inmates" from escaping. Not the sort of place you'd want two little girls, ages 7 and 5, to stay for a few nights. 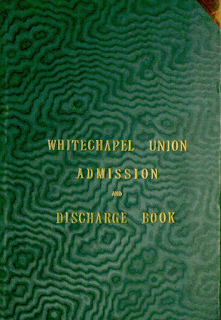 After catching my breath, I went back to my other research about the Slatter family living in a terribly poverty-stricken part of London, Tower Hamlets in Whitechapel.

I knew the three boys had been sent to a military training ship on the Thames in 1875 and were lucky to escape a devastating fire. All three brothers went on to serve with distinction in the military, with Captain John Daniel Slatter (1864-1954) becoming a renowned band leader based in Toronto.

But until now, I didn't know all five siblings had been bundled off to Bromley House, the workhouse. According to the admission and discharge book, they were sent by the matron of the Forest Gate School.

Well, I had a guess. I've never been able to find the death date of the mother of these children, Mary Shehen Slatter. Born in 1840, I thought Mary died before 1888, the year when her husband left London forever and came to America. 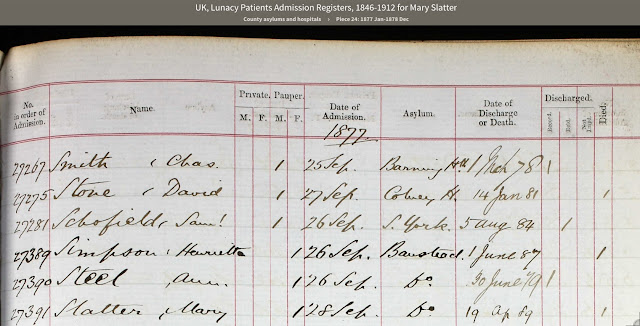 But maybe I was wrong. This was my second shock. Above, part of a ledger from "UK Lunacy Patients Admission Registers" for the year 1877. A Mary Slatter was admitted to Middlesex County Lunatic Asylum (later called Banstead Asylum) on September 28. This Mary died on April 19, 1889. According to the death index, this Mary was 52 years old. 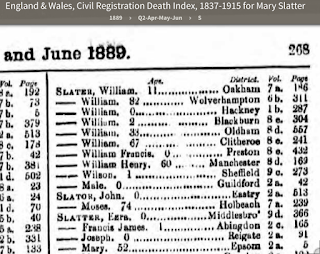 So if Mary Slatter wasn't able to care for her children from 1874 on, it makes sense that they could be shuttled from school to workhouse to training ship (the boys).

Yet John Slatter sailed off to America and by 1893, was living in Cleveland along with a wife, Louisa (I've never been able to locate a marriage record for these two, so perhaps she was a "wife"). So did he leave a wife in the asylum and start a new life to forget the misery of the old one?

More research is in my future to determine whether the Mary in the asylum was, in fact, my husband's great-grandma.
Posted by Marian B. Wood