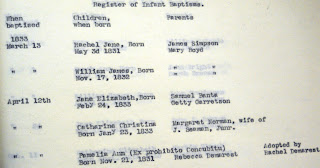 Looking for my hubby's great-grandmother's birth, I came across this page from the transcribed records of the Reformed Dutch Church at Greenwich (New York City).

Great-grandma was Mary Amanda Demarest, not Pamelia Ann Demarest (see last entry in the photo). However, Mary Amanda's parents and early years remain a mystery, even though cousin Larry (our family's super-genealogist) has been searching for more than a decade.

Baby girl Demarests born in 1831 in New York City are of interest to us, since that was Great-grandma's year and place of birth. And looking for Mary Amanda Demarest led me to stumble across Pamelia Ann Demarest, born in 1831, in the church records.

Pamelia Ann was born ex prohibito concubitu which, a professional genealogist explained, meant her parents weren't allowed to marry. Having never seen or heard this phrase before, I was wordless for a moment (rare for me).

Was the parents' relationship too close (first cousins, for example, or even closer)? Was the father or mother already married? Was the mother (or father) too young to marry? Note that no father was listed, and the baby was adopted. It's also a legal issue: This child can't inherit.

But there's more to the Demarest mystery. I'll save that for another day!
Posted by Marian B. Wood